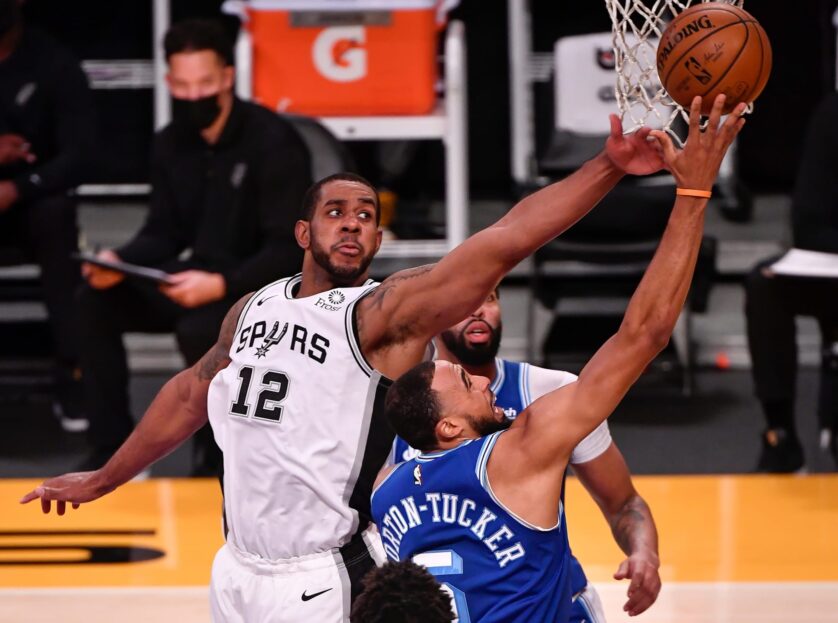 When San Antonio Spurs fans were writing their wish lists for the 2020-21 season, a continuation of LaMarcus Aldridge‘s three-point emergence was near the top of the list. The 35-year-old big man had become a valuable floor spacing option for San Antonio last season, but could he bring that momentum into the new year?

Coming into the regular season, Spurs fans were optimistic that Aldridge could mesh well with the style of play that San Antonio had been running with in the bubble. He was committed to embracing his role as a floor spacer and his teammates and coaches had given rave reviews throughout training camp.

We made excuses for his poor pre-season play. Maybe he was still adjusting, maybe he just needed to get his legs under him a bit more. Things would get better in the regular season, at least that was the belief.

Sadly, that hasn’t been the case. Aldridge has had bright spots but overall his play has been dragging the team down and has left them with one clear route to pursue.

Father Time is exacting his price on Aldridge with every day that passes and that’s incredibly evident in the defense he’s been playing this year. He’s simply not as quick as he once was and he’s regularly been burned by the faster, younger, and more nimble big men he’s had to face. Here’s a quick rundown of some players who’ve given Aldridge problems:

He’s not getting cooked for 40 a night but the ease with which these players are gliding past LaMarcus is alarming. He just can’t keep up.

The defensive issues would be more forgivable if he was making up for them on the offensive end but he’s not. That three-point shooting we hoped would make an appearance? Yeah, not happening.

He’s shooting more from behind the arc (3.7 3PA per game, up from 3.0 last year) but his accuracy hasn’t been there. He’s only hit on 25 percent of his 3-point shots so far this season.

Now, it is still very early in the season, maybe Aldridge could pull out of this nosedive we’ve been seeing but it’s not like the Spurs have all the time in the world to wait for that to happen. The longer he struggles, the lower his value is going to be, and the trade deadline is going to be here before you know it.

The Spurs won’t be able to get a haul of young players and picks for Aldridge but there is a market for his talents. The Portland Trail Blazers just lost Jusuf Nurkić to another unfortunate injury. The Miami Heat got close to winning it all last year but have struggled so far, could adding LaMarucs be the spark they need? Could the upstart Knicks be conned into giving up a pick and a player for another big man?

I don’t want to come off too cold but really, should this even be a discussion? You have to appreciate all that Aldridge has done for the Spurs over the past 5+ seasons but his time here is clearly coming to a close. He’s a UFA this summer and it seems unlikely he’s going to re-sign here so why not pull the plug and try to get something in return?

LaMarcus Aldridge is a likely Hall of Famer and one of the best big men of his generation. But it’s time for the San Antonio Spurs to call this what it is and start trying to move him. Try to do right by him send him to a contender where he can play for a ring but he should be moved by the trade deadline.