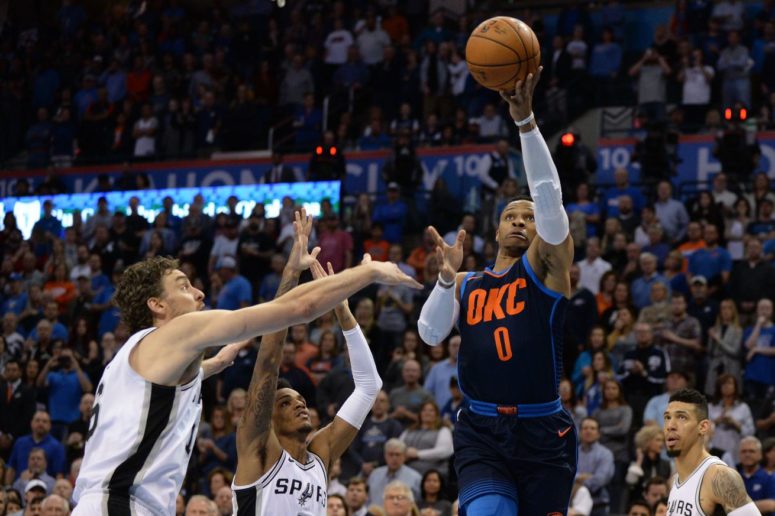 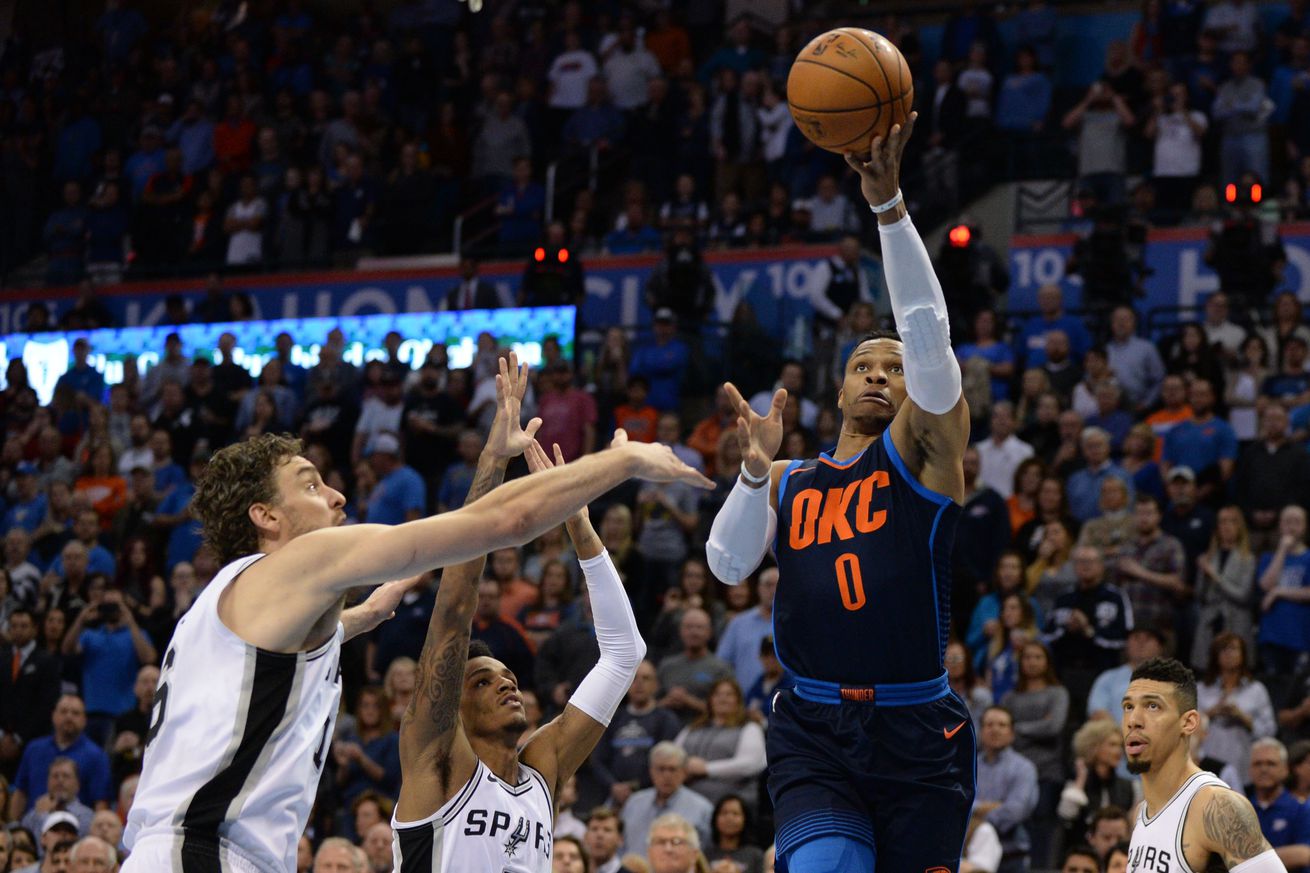 San Antonio’s backups almost pulled out a win as most of the Spurs stars sat.

The Spurs were without their best players against the Thunder, with LaMarcus Aldridge, Kawhi Leonard, Tony Parker and Rudy Gay announced to be out, and Manu Ginobili taking a night off. But a group of backups, led by Dejounte Murray and Davis Bertans fought back and almost pulled out a win, with both Bertans and Brandon Paul having chances to tie the game as time ran out, as they got great looks that just missed. The Spurs also got solid contributions from Derrick White and Joffrey Lauvergne, along with Brandon Paul. It was a great confidence builder for the Spurs bench players and a reason for concern for the Thunder, who once again blew a lead late and almost lost the game.

The bad news of the night was an ugly looking injury for Kyle Anderson at the end of the third quarter which was reported as a sprained knee. Hopefully, he will be able to return soon for the Spurs, since he’s been a key contributor this year for the Silver and Black.

The Spurs starting lineup of Dejounte Murray, Pau Gasol, Brandon Paul, Kyle Anderson and Danny Green had trouble scoring to start the game, and the Thunder rushed out to a quick 6-0 lead with Stephen Adams doing most of the damage. Finally Paul broke the drought with a furious dunk to put the Spurs on the board. But Westbrook and Adams extended the lead to 10-2 and Pop needed a timeout for the Silver and Black. The Spurs stepped up the defense, taking away the easy baskets in the paint for the Thunder. But the Spurs bench wasn’t as successful stopping them, as Jerami Grant dunked to put the Thunder up 25-18 after one period.

The Spurs forced a turnover to start the second quarter, and Davis Bertans layed it in on the fast break, beating everyone else down the floor. Davis showed he has game on the defensive end, too, and prevented a score with blocks of Adams and Paul George on consecutive possessions. Dejounte Murray showed his grit by chasing down Raymond Felton and denying a breakaway dunk by using his length. The Spurs’ cold shooting kept them from closing the gap, but their tenacious defense kept the Thunder from extending the lead. But Westbrook took over for the Thunder and pushed the lead to 12 for the Thunder as he called his own number again and again. The Spurs inability to secure rebounds hurt them late as Jerami Grant hit a three point shot as time ran out. The Thunder led 54-43 at the half.

The Spurs were careless with the ball to begin the second half, but the Thunder couldn’t take advantage in the first few minutes. But they finally got untracked and built a 16 point lead with Westbrook leading the way. Carmelo Anthony finally was able to see the ball and put it in the basket to extend the lead for the Thunder. Derrick White came back into the game and had some impact, discombobulating the Thunder offense with his harassment of Westbrook, both before and after the whistle.

The rookie with the block on the MVP pic.twitter.com/6nWXuI9k5T

The Spurs defensive intensity helped them close the gap as they went on a run late on the quarter as they closed the gap to four points. Kyle Anderson got hurt with a minute left and the Thunder foolishly chose Joffrey Lauvergne to take his free throws, and he hit both of them. A late deep shot by Bertans was the final score of the quarter as the Thunder led 76-73 going into the final period.

Lauvergne took on three players in the paint and scored to cut the lead to just a point to start the fourth. Unfortunately, he dislocated a finger on the play and had to leave the court. But after an adjustment from Will Sevening, he came right back into the game, showing his toughness. Bertans hit a midrange jumper to give the Spurs their first lead in the game at 77-76. After an exchange of baskets, Westbrook slipped and fell awkwardly. The Thunder called timeout, with the Spurs up by a point and just over 8 minutes left. The young guys on the court lost a little composure and turnovers let OKC recover the lead with an 9-0 run to lead 87-79 with 4 minutes left. But an 8-3 run from the Spurs brought them back to within a basket. Bertans had a good enough look to tie the game with 13 seconds left, but it missed badly. The Spurs had yet another chance to win as they stole the ball, and Brandon Paul got a great look that missed.

I know you didn’t pay to see these guys, but they showed up anyway.

The Spurs are on a stretch of five games in seven nights, the next one in San Antonio on Monday at 7:30 pm against the Detroit Pistons. See you in the game thread.