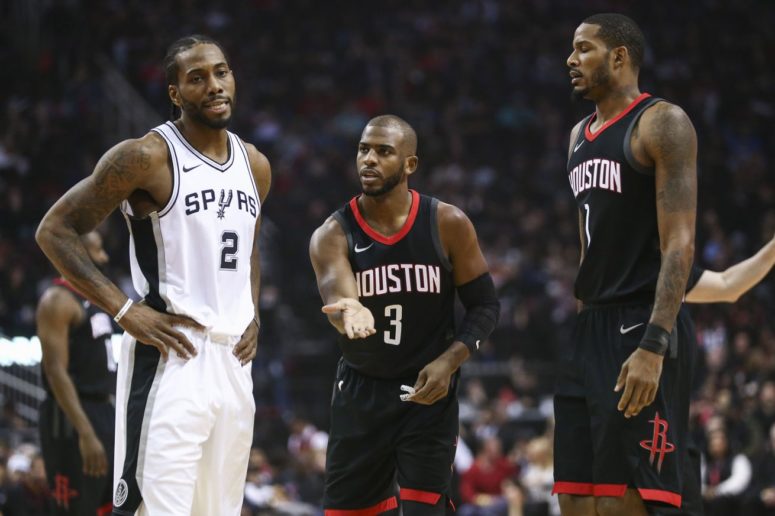 Chris Paul’s wizardry with the ball kept the Spurs from getting back into the game after a sloppy start.

Kawhi Leonard looked good in his second game back, but the rest of the Spurs had a tough time against the Rockets as their superior guard play overwhelmed the Silver and Black in the first meeting between the clubs this year. Chris Paul got whatever he wanted all game long, and James Harden was able to get to the free throw line and get plenty of points whenever the Rockets needed them. In the final quarter, a young Spurs lineup showed some scoring punch as they cut into the lead late, but it was too little, too late as the Rockets won 124-109.

Trevor Ariza scored the first basket of the game, a deep three to put the Rockets on the board first, and Kawhi scored a jumper to bring the Spurs back. The Rockets built a 9-2 lead with three-point shots and free throws, but Danny Green’s layup and a Kawhi Leonard steal brought the Silver and Black back. Chris Paul’s three-point shot put the Rox up 12-8 early, as the Spurs traded 2 point shots for triples. Kawhi Leonard went to the bench after 5 minutes, and the Spurs turned over the ball and committed too many fouls as the Rockets added to the lead to extend it to double digits. Manu Ginobili’s layup plus the foul helped to limit the damage, but the Spurs turnovers continued to hurt them as the Rockets lead swelled to 31-16 on a P.J. Tucker triple, and that’s how the first period ended.

The second quarter started with more of the same, as the Spurs turned over the ball and the Rockets turned the miscues into points, doubling them up at 36-18 early. It got worse as the Rockets went on a 13-0 run to lead 51-23. Finally, led by Kawhi, the Spurs started to show signs of life late in the quarter as they cut the lead to 17 with just under 2 minutes left. James Harden and Rudy Gay exchanged triples, and the half ended with the Rockets up 60-43.

The Spurs started the second half with Kawhi on the bench and traded baskets with the Rockets to start the quarter. But then, Chris Paul began to feed the ball to Clint Capela for easy baskets to push the Rockets lead back up to 26. halfway through the quarter. Brandon Paul, Patty Mills and Bryn Forbes all hit triples to help cut into the lead, but Harden continued to get free throws to keep the Rockets’ lead from shrinking. The Spurs made a mini-run, but it was blunted with a Chris Paul 4-point play. A poorly handled inbound pass to Dejounte Murray gave Paul another easy three point shot and the Rockets led 92-72 after three.

Gregg Popovich started the fourth with a lineup of young players with Davis Bertans, Joffrey Lauvergne, Brandon Paul, Bryn Forbes and Dejounte Murray. They provided more energy, but on defense, Chris Paul was able to exploit their inexperience and score easily. But finally the Spurs began to play some defense and get turnovers and they cut the lead to 14 with a Bertans breakaway dunk halfway through the quarter. The Rockets recovered their composure and began to turn over the young Spurs, pushing the lead back to 20. With 3 minutes left, Harden and Paul took a seat as garbage time commenced, and the Rockets won 124-109.

Most people think of Gary Numan as an 80s guy, but he’s still making music. Great music, in fact.

The Spurs now have a 19-10 record and are third in the Western Conference. The Mavs come to the AT&T Center tomorrow at 7:30 for their second matchup with the Spurs this week. If you’re at the game, be sure and give Salah Mejri the appropriate welcome. Kawhi will be resting, but Patty Mills will be ready to take on the big guy.