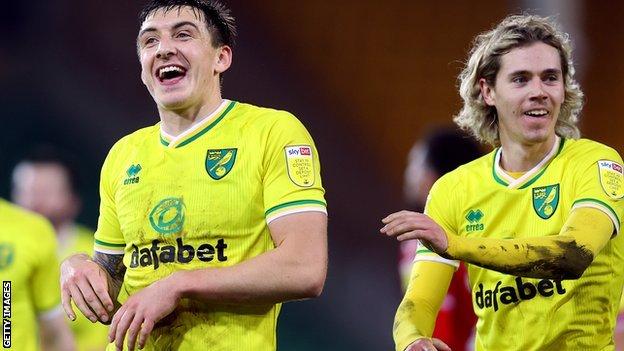 Jordan Hugill scored twice as Norwich City extended their lead at the top of the Championship with a comfortable win over Bristol City.

The hosts had a number of opportunities to open the scoring before Hugill eventually headed them into the lead after 36 minutes from Todd Cantwell’s measured cross.

Hugill bundled in a second to wrap up the win when Bristol City defender Tommy Rowe was down in the area.

The Canaries are now seven points clear of second-placed Swansea and 10 points ahead of third-placed Watford, although they have played a game more than both.

Ominously for the rest of the division, Daniel Farke’s men have five more points than they had at this stage two years ago when they won the league by five points.

Only great defending from Tomas Kalas and a superb save by Daniel Bentley from Kenny McLean’s long-range shot stopped them going in front prior to Hugill’s header.

Injury-hit Bristol City improved after the break but struggled to create any clear-cut chances against the dominant hosts.

Hugill, in for injured leading scorer Teemu Pukki, scored his fourth of the season from just a couple of feet after Max Aarons’ low ball across the face of goal bounced off Kalas.

The visitors had some cause for complaint as Rowe was down in the area after the initial ball into the box but referee James Linington deemed it not to be a head injury and allowed play to continue.