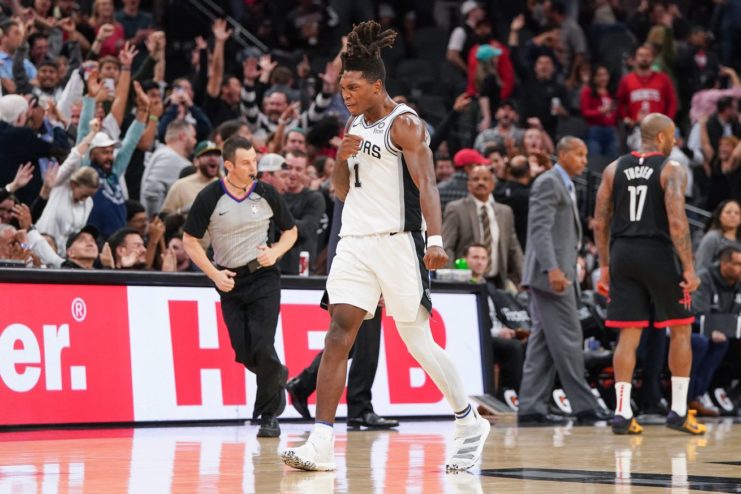 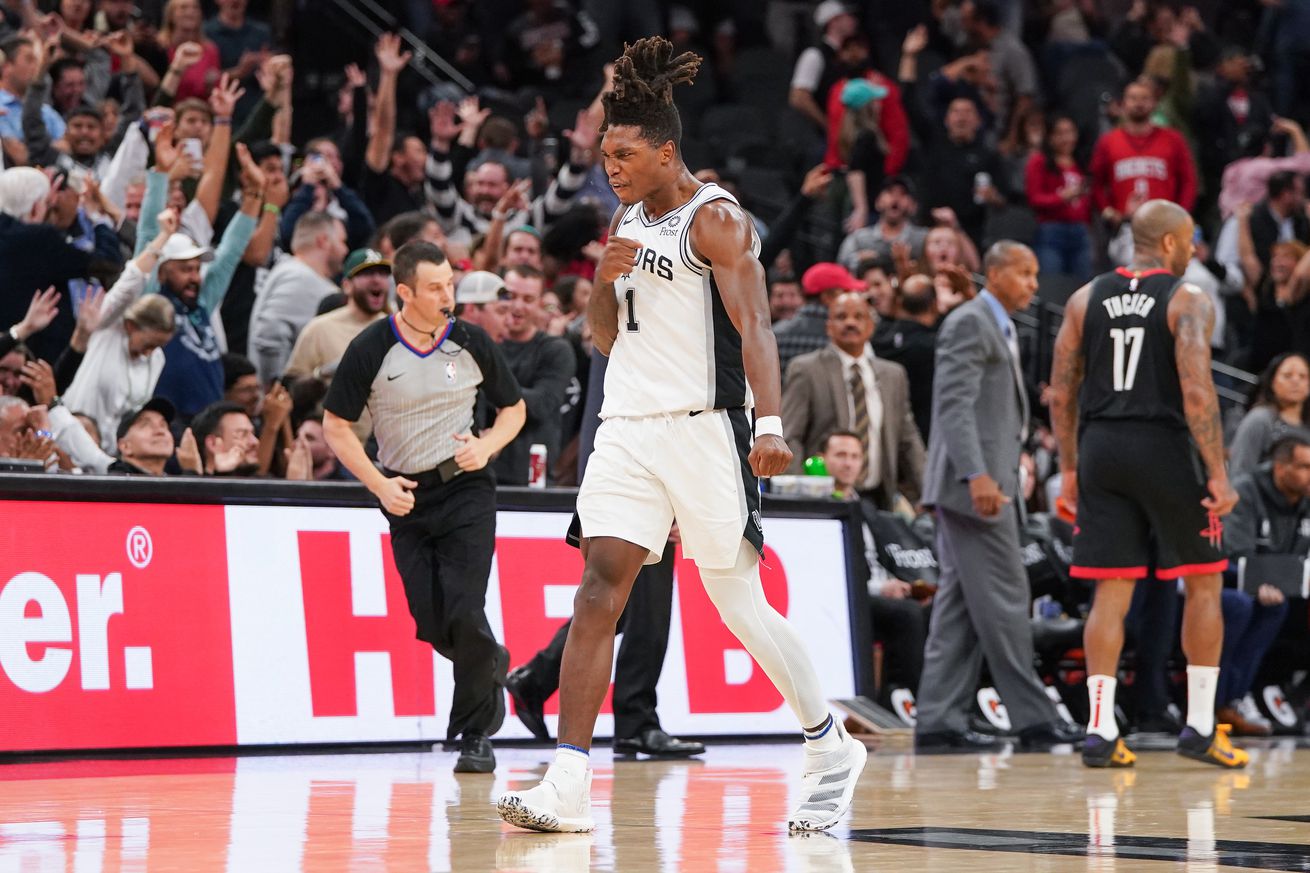 The sophomore wing caught fire in the fourth quarter to lead San Antonio to a thrilling comeback win.

In what will definitely be one of the best games of the entire NBA season, the Spurs came back from a 16-point fourth-quarter deficit to beat the Rockets 135-133 in double overtime. Lonnie Walker IV was largely responsible for the improbable comeback by scoring a career-high 28 points, including 19 in the final period of regulation.

For three quarters, there was nothing unusual about this game. San Antonio had taken advantage of the high variance style the Rockets play and from the few minutes James Harden rested to keep it close in the first half, but couldn’t sustain their level in the third period. Up until that point the Spurs had played well enough to make up for their awful effort in Detroit from two days prior and could feel proud about keeping up with one of the best teams in the West for long stretches, but seemed on their way to their 15th loss of the season. James Harden was simply too difficult a riddle to solve on defense and the lack of prolific three-point shooting made a comeback unlikely against an opponent that typically has no problem getting points on the board.

But Lonnie Walker IV had other plans.

Walker replaced Marco Belinelli in the rotation for the first time against Houston and and looked utterly composed. During the first three quarters he did what he could guarding Harden and logged five points and three rebounds in what was a solid but unspectacular performance. What came next was a shock to everyone, except for maybe Lonnie himself.

Walker went supernova in the fourth quarter, scoring 19 of his 28 points in the period and spearheading a comeback that sent the game to overtime. He did it all, from getting steals that triggered fastbreaks to hitting timely long balls, as all Spurs fandom watched in awe and the Rockets shook their head in confusion. The entire team had a hand in erasing Houston’s lead, either through defensive playmaking or crucial buckets, but there is no doubt that without Walker’s specific brand of energetic, confident play the Rockets would have prevailed in regulation. He had unparalleled impact on the game.

There were no heroics for Lonnie in the chaotic overtime periods, despite kicking things off with a three-pointer, as both teams looked exhausted and nervous and turned to their stars for answers. Harden and DeMar DeRozan tried to carry the offenses, with limited success, in two helter-skelter overtimes that featured the ups and downs that can be expected from games in which players are on the court for up to 50 minutes. The Spurs almost lost it when DeRozan missed a free throw to tie the game at 132 with 30 seconds to go, but he had his redemption when he made both from the line with three seconds left to give the Spurs the lead that secured the win.

It’s impossible to tell at this point if this game means anything in the grand scheme of things. Walker has to have secured a rotation spot after this performance, but it’s unlikely he’ll have many more games like Tuesday’s for the rest of his sophomore year. San Antonio is still 8-14 for the season and currently out of the playoffs, so no one would be surprised to see them drop the next two at home.

But none of that matters right now. For the first time in a while, the Spurs were fun to watch and we got to see a breakout performance from one of the young potential cornerstones. Let’s enjoy this moment and worry about the rest later.

This is the craziest “missed” dunk I’ve ever seen. Crazy, because James Harden didn’t miss it. Refs missed the call. Rockets lost in OT. pic.twitter.com/uNkD5ez32Z

Considering it was such a close game, it’s not surprising to hear that the Rockets will reportedly file an official complaint if the league doesn’t take action.

A Rockets source is optimistic that the NBA office will take action regarding James Harden’s dunk that didn’t count, either awarding the win to Houston or ordering that the final 7:50 be replayed because the Rockets outscored the Spurs in regulation. The Rockets believe a…

Next game: Vs. Kings on Friday

The Spurs will get two days off to rest their tired legs and could hopefully have LaMarcus Aldridge back to host the Kings.