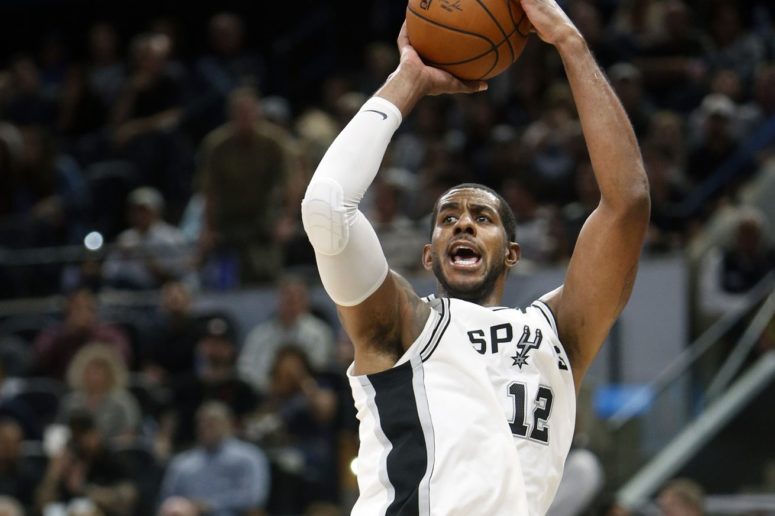 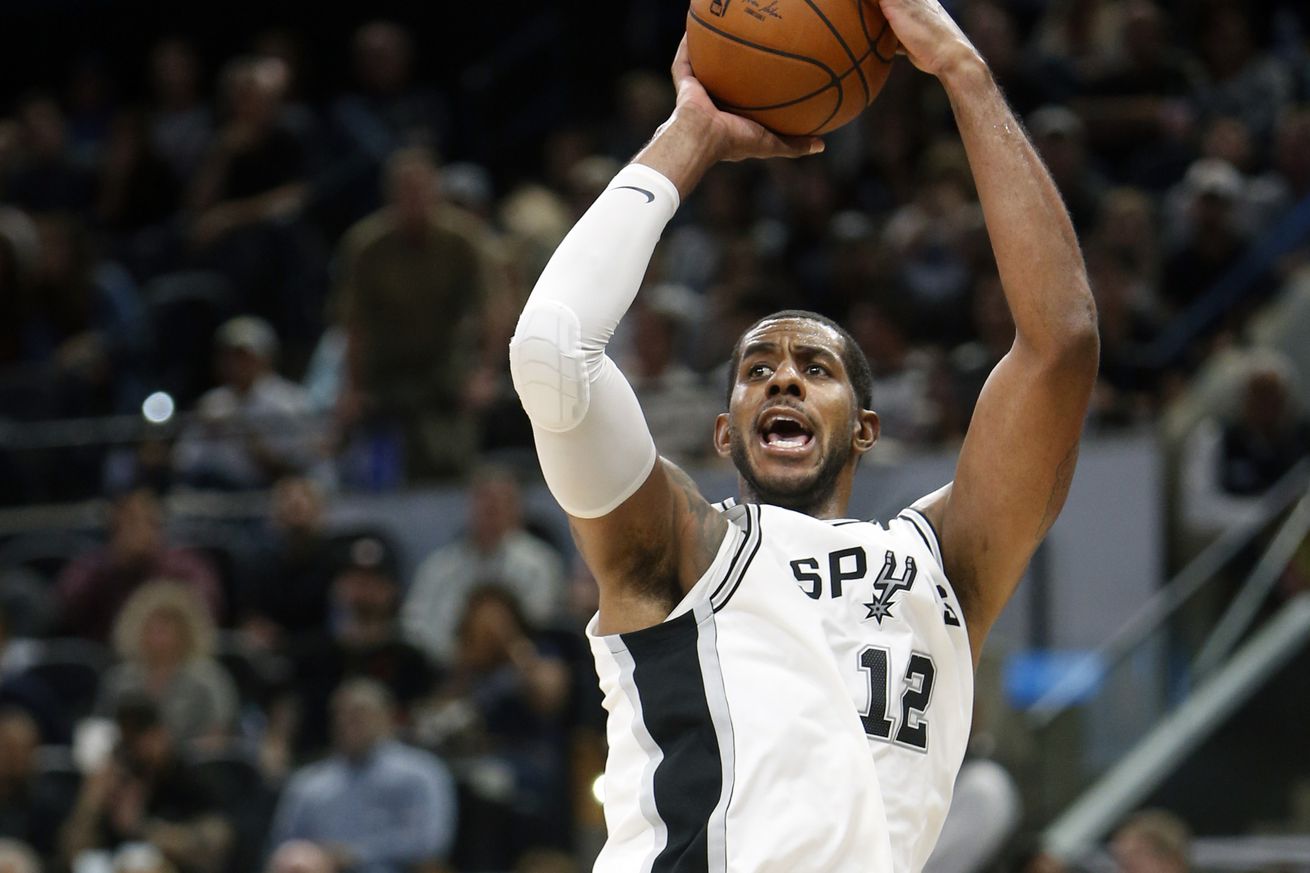 A trilogy isn’t over after the second movie.

When LaMarcus Aldridge is on fire, there’s a violence to his game.

He has so many different ways of scoring, it’s like he’s a fighter in the Bloodsport tournament who can beat you any number of ways. He’s not limited to one style. He smokes people with his patented turnaround jumper, his pick and pops, rolls to the baskets, thunderous jams and this year he’s rediscovered his three point shot. He’s merciless when he’s in “the zone.”

He smolders. He walks across coals unfazed. It’s so determined and repetitive it’s somewhat uncomfortable to watch, like when a defense just can’t stop the run.

I tend to love players who beat teams I root against. I was a Baron Davis Stan for years following his performance against the Mavericks in the 2008 first round. I have always liked LaMarcus Aldridge because he went to the University of Texas, but I started to love him when he destroyed the Rockets in 2014. The Spurs got him to be that guy: The big man who can turn vicious. I danced around my in-laws’ living room after reading his announcement to join the Spurs. The Spurs first ever true big free agent splash. He and Kawhi Leonard together with The Big 3? Yes, please.

In Games 1 and 2 of the 2016 Western Conference Semi-Finals against the Oklahoma City Thunder, Aldridge was unconscious, averaging almost 40 through two games. I was at Game 2 of that series and witnessed Aldridge surgically dissect the trio of Thunder big men at the time, Enes Kanter, Steven Adams and Serge Ibaka. At one point during his onslaught, the rage that LMA seemed to be feeling overtook me as well and I shoved my friend sitting next to me, spilling his beer. I yelled “He is going IN right now!” I still have no idea what that means. LaMarcus seemed angry…therefore, I was angry. I was certain during that game that he was the player I thought the Spurs were getting when he announced his signing with the Spurs in July of 2015.

When he is hot, Aldridge is a predator. Though the “when” had become the problem for Aldridge during his time on the Spurs.

Those hot moments happened less frequently during the 2017 season. Too infrequently for Spurs fans, the team and Aldridge himself. Reports came out in the summer he was being shopped by the Spurs, and Aldridge was reportedly happy to receive a ticket out of town.

Aldridge seemed to be two players. I remember reading a tweet once that Aldridge either makes “all the shots or none of the shots.” The Spurs are so used to guys like Tim Duncan, Kawhi Leonard and Tony Parker, who in their primes were so consistently great, so it isn’t surprising that Aldridge frustrated fans.

With Richard Jefferson, the Spurs other maligned “big” signing of the last 10 years, there were never flashes. Jefferson just never showed up and the Spurs promptly showed him the exit. Alridge’s identity shuffling between unstoppable force and blasé big body made it worse. He had moments like last year’s Game 6 in Houston where he bludgeoned the Rockets with 34 points, then he had games where he seemed to pull off the perfect disappearing act. Though much of the criticism against his performance in the Warriors series was undeserved (as Aldridge was lacking Kawhi Leonard and Tony Parker) Pop deemed his play too soft for the moment and that seemed to be the end.

Players who are capable of such blistering outputs can’t go to sleep as often as he seemed to. LaMarcus didn’t seem to be “pounding the rock” & Pop wasn’t able to consistently guide his big man’s hand to the chisel. The Spurs had not been able to draw the “when” out of him enough and Aldridge had not been able to adapt to the Spurs way.

If you’d been in a coma and said your first wish was to watch the Spurs and you saw LaMarcus’s 41 point outpouring against Memphis on Wednesday night in a vacuum, you would say, “that’s great…and he does that every night?”

The “when he’s hot” is now a nightly expectation. But, it’s not just an expectation of empty stats. It’s a mindset and continual aggression he’s demonstrated.

Gotta love the way LMA puts his head down and sprints to the rack as soon as his man leaves his feet. £ers, this is aggression. pic.twitter.com/vRZJOOLEC9

His 41 point sizzler immediately followed a 33 point performance against Dallas and came in a season when he’s averaging 23 points and shooting 52% from the field and 36% from long range. Sure, he’s gotten to this level with Kawhi Leonard in rehab. But, when you watch him play, you see that guy who the Spurs only had glimpses of and always desperately wanted LaMarcus to be.

This performance against Memphis was fitting. It was the Grizzlies’ first game since firing Coach David Fizdale after a falling out with superstar Marc Gasol. The Spurs and Aldridge probably weren’t in too different a situation this summer. Fizdale to J.B. Bickerstaff is the Grizzlies’ 13th coaching change in the 22 years the Spurs have been led by Coach Pop.

Last year in the playoffs against the Spurs, Fizdale busted out his famous “take that for data” rant, putting his wallet on the line for his players to get calls from the officials. But in seven short months that rapport with his team had disappeared. It shows the tightrope that organizations, coaches and players walk on in the NBA — expect for the Spurs. Honestly, what organization besides San Antonio could come back from the depths to which the Spurs and Aldridge reportedly descended to after last season?

Windows in the NBA are fragile, they break and close easily. Especially for small market teams. With Tim Duncan gone and Manu Ginobili and Tony Parker almost done, the Spurs have to be more careful as well. The Spurs brought back Aldridge because they didn’t want Kawhi to go through his prime without a running mate and Aldridge was their best option. But, the reason the Spurs have gotten the best version of Aldridge is because of who they are as team and their culture.

The notion that Pop treats all his players the same doesn’t tell the whole story. Pop coaches his players the way that each one of them needs to be coached. He rips into Danny Green and Tony Parker because he knows how they’re wired. Kawhi doesn’t always seem to get the same kind of treatment. With LaMarcus, I think Pop took him aside and showed him a vision of who he thought LaMarcus could be. Credit LaMarcus for buying in. Good thing…because they are one another’s best chance.

1) As Aldridge was unloading on the Grizzlies, Sean Elliot couldn’t contain himself and boasted “whoever put up that billboard this summer, please stand up and take a bow.” Bill Land just laughed and responded with “put up another one!” I think its every Spurs fans duty to put up an Aldridge billboard.

2) I think this was Rudy Gay’s best game as a Spur. Not because of scoring output, but because of what all he put on display. From defense to initiating fast breaks to turning alley oops into assists, he is bought in.

What would you call this play: alley-alley-oop? alley-oop-opp? volley-oop. No matter the name, it’s Pau to Rudy to LMA for two. pic.twitter.com/uzKi0v8F2e

Patty and LMA playing the two man game, until Mills gets an open shot … that he passes up to take advantage of Manu’s perfectly timed cut. #StillManu pic.twitter.com/DhPp1GX6yJ

Second time this game Manu has cut out of nowhere to receive the pass and lay it in. #StillManu pic.twitter.com/IOak1W2Pvq

I Wish for: This rejuvenated LaMarcus Alridge to be LeBron James bait this summer. Come on LeBron, come play with Kawhi, LMA and your buddy Dejounte.

Shoutout to @SheaSerrano who hit the world with the greatest LaMarcus Aldridge reverse jinx ever.

(All without their best player)

71% shooting for a season-high 41 … @aldridge_12 had himself a night! pic.twitter.com/VIUc1hrarI