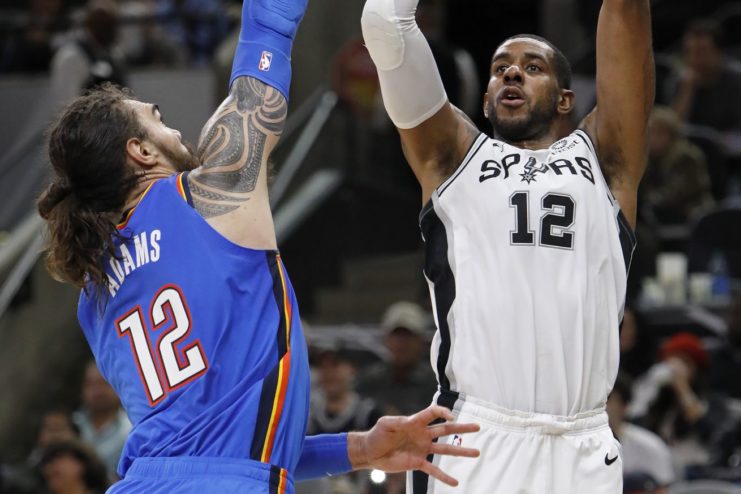 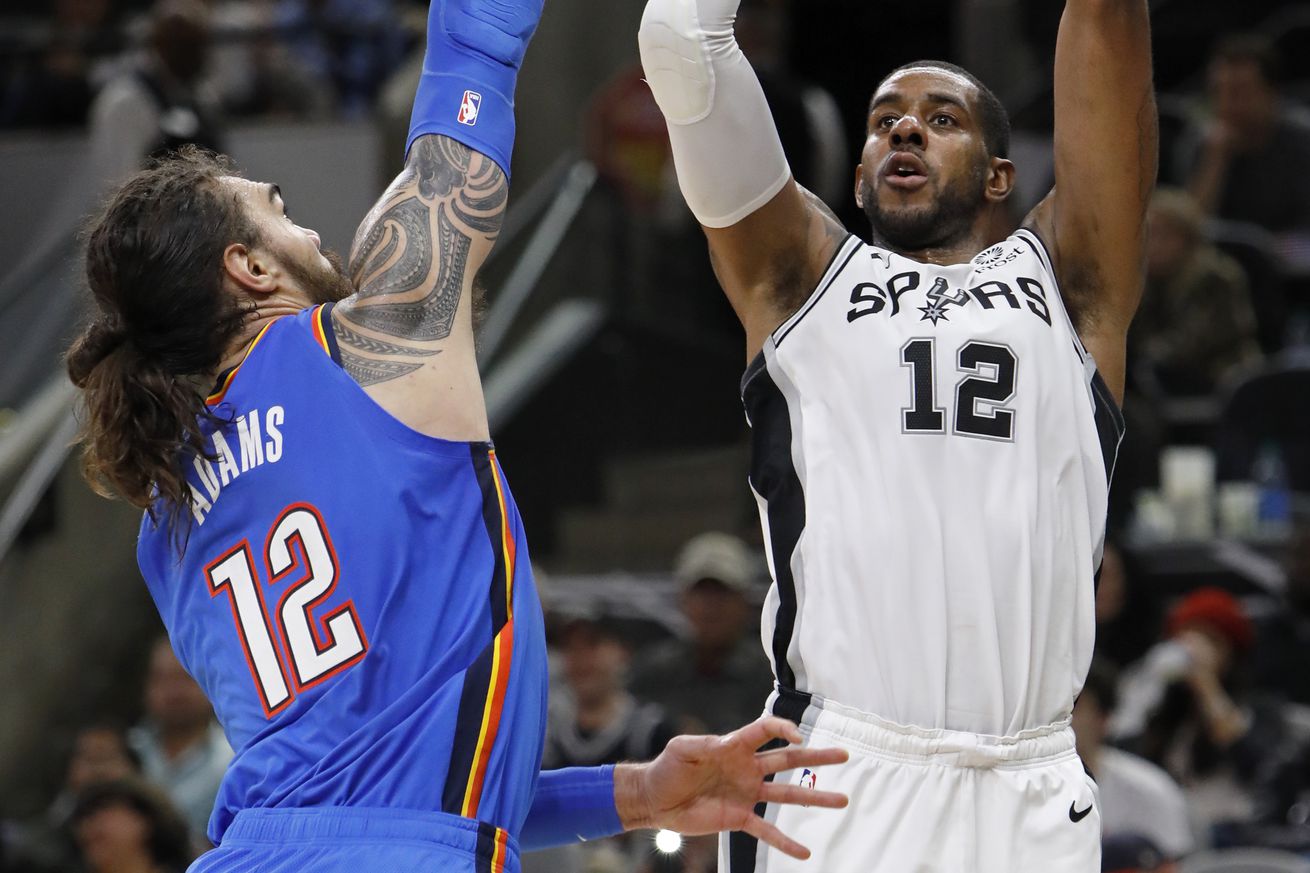 This kind of performance against OKC is becoming something of a habit.

For as little as this Thunder squad resembles the last one that visited the AT&T Center, the result was no different, nor has it been stretching back to the Spurs’ last home loss to an Oklahoma City team way back in the 2016 playoffs. With their 121-112 victory, the Spurs have now won 6 straight home games over the Thunder.

Like both of their contests in San Antonio last season, LaMarcus Aldridge led the way for the Silver and Black. With a nearly note-for-note recital of his 56 point masterpiece from the first of those games, LaMarcus turned just about everything he touched into buckets. His 39 points on a ruthlessly efficient 19 of 23 from the field eviscerated a Thunder club that had entered the night with the league’s 2nd best defense. It didn’t matter how they tried to defend him nor with whom. LaMarcus had a quick trigger all night and once he saw a couple go in, the defense didn’t really exist for him anymore.

The Thunder’s top three scorers, on the other hand, weren’t even on the team last year. Danillo Galinari paced the visitors with 27 points, while Shai Gilgeous-Alexander poured in 21 of his own and Chris Paul added 19. Despite the personnel turnover, this version of the team is as competitive as ever, with much of the same length and athleticism that has given the Spurs trouble for years.

With Steven Adams still anchoring the middle on both ends of the court and athletes all over the floor, it’s no wonder the team’s defense has been stout to begin the season. The key difference in this matchup now, if there is one, is that the dynamic game-changing guard plays for the good guys now.

The return of Dejounte Murray has brought back some of the joyous chaos that used to infect Spurs’ games on a regular basis. His nightly one-man mini runs, which came late in the 2nd and early in the 3rd quarter of this game, provide a spark of energy that keeps the team from falling flat.

His charge, for much of the evening, was checking a player who has quite literally single-handedly ended a Spurs’ playoff run. With Paul now in his 15th season, he plays with relentless guile, constantly searching for opportunities to exploit but no longer able to dictate terms on his own. And though he landed some punches, including a fadeaway rainbow over Rudy Gay as time expired to draw within 3 at the end of the 1st quarter, the Spurs’ youngster walked away the clear winner of this matchup, and not just because he hit the President of the NBPA with a slick up and under.

Murray nearly logged his first triple double on the night, coming just 2 rebounds shy of the mark in a season-high 26 minutes of playing time. He added 17 points and a new career high of 10 assists to those 8 boards, thanks in large part to the big fella who couldn’t miss. 8 of his dimes went to LaMarcus, and though a couple were great setups from the young point guard, most were Dejounte making the simple read and hitting LaMarcus as he popped open.

San Antonio’s other star, DeMar DeRozan handed out 9 assists of his own to go with 16 points on just 13 shots. Just like last year, DeMar picked his spots, and there was no need for him or anyone else to force anything with fire coming out of Aldridge’s fingertips.

When the Spurs are hitting like this, the game looks easy. They made 54 of their 90 shots overall, and in a dramatic turnaround from the first 7 games of the season, 9 of their 20 threes. Coming as it did against what has been a solid defensive team, their scoring output is very encouraging.

The Spurs continued to struggle in their own end of the court. The Thunder, who were averaging 103.5 points per 100 possessions entering the game, put up 112 points in a 97 possession game. That’s not a good sign for what might happen when the Spurs go up against high scoring teams.

Trey Lyles continues to make 2 or 3 basketball plays that are the equivalent of found money every game. He just happens to be where the loose ball bounces or where the carom falls way too often for it to be chance, and yet, most of the time he’s allowed to just waltz right in.

It’s got to be infuriating for the other team. Regardless, as long as he’s making plays like these, he’ll continue to be value added.