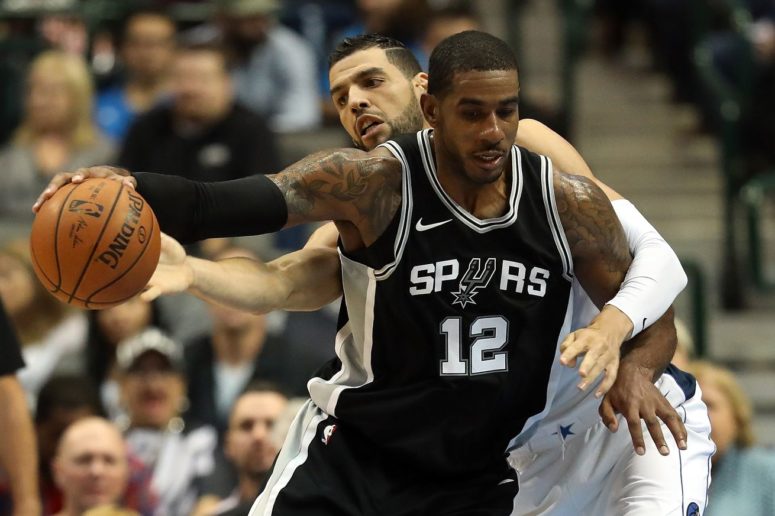 This one felt like an old fashioned rivalry game, complete with some vintage Dirk and Manu and a little scuffle.

The San Antonio Spurs and Dallas Mavericks may be headed in completely different directions right now, but the rivalry still burns along IH-35. It was a chippy, defensive slug-fest that featured some spurts of vintage of Dirk Nowitzki, J.J. Barea (a.k.a. “The Pest”) being his floppy, unstoppable self, and two of the smartest coaches in the league going head-to-head.

Rick Carlisle had his players well versed on where Spurs passing lanes are, and it showed early as the Spurs committed five turnovers in the first quarter that mostly consisted of Mavs players easily intercepting passes. Even Pau Gasol and LaMarcus Aldridge had trouble getting their usually automatic high-low game going.

As a result the Spurs offense was stagnant early on, but fortunately so were the Mavs. Both teams entered the second quarter on fire, with Nowitzki and Patty Mills trading hay-makers before things slowed back down. However, it’s not a Spurs-Mavs rivalry game until some chippiness happens, and it was provided late in the second quarter.

Mavs back-up center Salah Mejri – infamous for this humorous incident – wrapped up Aldridge and attempted to throw him to the ground as he tried to establish position in the paint (good luck with that), earning himself a personal foul and Aldridge a technical for retaliating with a little shove. That was a mistake as it lit a fire under an already hot Aldridge.

The Spurs led 44-39 at the break, and in an odd twist, Manu Ginobili didn’t enter until the second half (was this Pop’s way of playing him for both games of a back-to-back?). He wasn’t rusty at all with 13 huge points on momentum-swinging plays. The Spurs built the lead up to 11 multiple times before Dallas came storming back on a 9-0 run to close the third quarter and get within two.

Aldridge scored 13 points in a high-scoring fourth quarter, and it was Manu who iced the game for good both from the line and with a driving layup over Nowitzki with 32 seconds left to make it a three possession game. It was quite the fitting end to an old fashioned rivalry that is just barely hanging on nowadays, and the Spurs won 97-91 to improve to 9-5 for the season.

The Mavs, now 2-13, played hard but look destined for a top 3 pick in the lottery next summer, which should be a good thing considering how deep this draft will be. They have some very good young pieces like Dennis Smith Jr. and Harrison Barnes to build around, but as it is today even a Spurs team missing two starters was too much for them to overcome.

Aldridge was already having a quietly good night, taking advantage of mismatches down low and dealing with double-teams well, but he only got better once Mejri made him mad. It’s the second time Aldridge has dominated after some chippy play goaded him into a technical (the previous was against Serge Ibaka and Toronto), and the opponent has come to regret it both times.

Mills had a season-high 19 points, and while most of it came in two little spurts, they were exactly when the Spurs needed him most: as the Mavs got hot to start the second quarter, and at the start of the fourth quarter after Dallas had closed the third quarter on a 9-0 run to get within two.

Not to keep harping on this, but I didn’t agree with Mejri coming out of that little skirmish with nothing more than a personal foul while Aldridge got T’d up. This wasn’t a simple case of the retaliator getting caught; the refs saw enough to call a foul in the first place, and it was more than two players fighting for position. Mejri literally wrapped his arms around Aldridge and tried to throw him down for no reason. It just seems odd that Mejri got off with no technical or even reviewed for a flagrant considering he was the obvious instigator and was not making anything near a basketball play. Pop appeared befuddled at the refs’ decision as well.

Fantastic! Excited for the first of our 4 meetings in 32 days supposedly? Is that right? https://t.co/Rw8upUVLTp

Correct! We’re done with each other before Christmas/New Year’s rolls around. Whoever made the schedule hates us. https://t.co/YOoQwFZxZL

The Spurs return to action tonight at the Target Center to take on the Minnesota Timberwolves at 7pm.