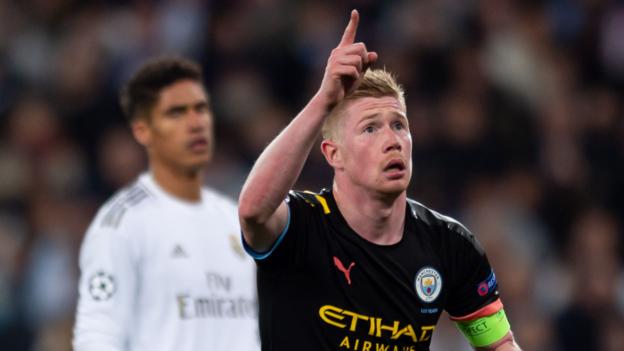 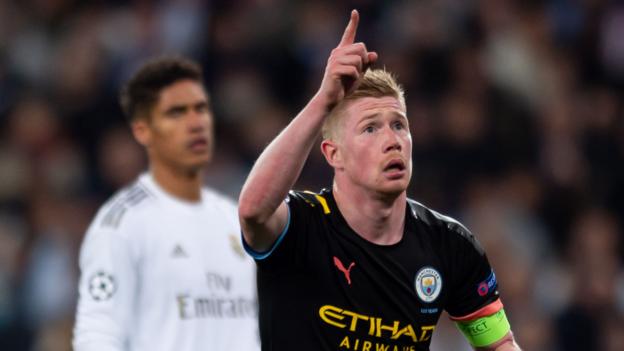 Midfielder Kevin de Bruyne has reportedly said he would have to consider his Manchester City future if their two-year European ban is upheld.

In February, City were found to have committed “serious breaches” of Uefa’s club licensing and financial fair play regulations.

City have taken their appeal to the Court of Arbitration for Sport.

“Once the decision is made, I will review everything,” De Bruyne, 28, told Belgian newspaper Het Laatste Nieuws.

“Two years would be long – but in the case of one year I might see. I’m just waiting. The club told us they’re going to appeal and they’re almost 100% sure they’re right.

“That’s why I’m waiting to see what will happen. I trust my team.”

Belgium international De Bruyne joined City in August 2015 for £55m from German side Wolfsburg – a club record at the time.

He has helped City win the Premier League in the past two seasons, although they have not advanced further than the semi-finals of the Champions League.

When football was halted because of the coronavirus pandemic in March, City were second in the top flight, 25 points behind leaders Liverpool, but in a good position to reach the quarter-finals of the Champions League after winning 2-1 at Real Madrid in the first leg of their last-16 tie.

De Bruyne said he expected the campaign to be completed.

“My feeling is we may be able to train again within two weeks,” he added.

“The financial aspect is far too important in the Premier League. If the season is not finished, it will cause serious problems.”

Asked about comments from his City team-mate Sergio Aguero, who said some players were scared to return because of the threat of the virus, De Bruyne said: “I don’t think people are really afraid for themselves, but for their family. That is mainly the problem for many people.”