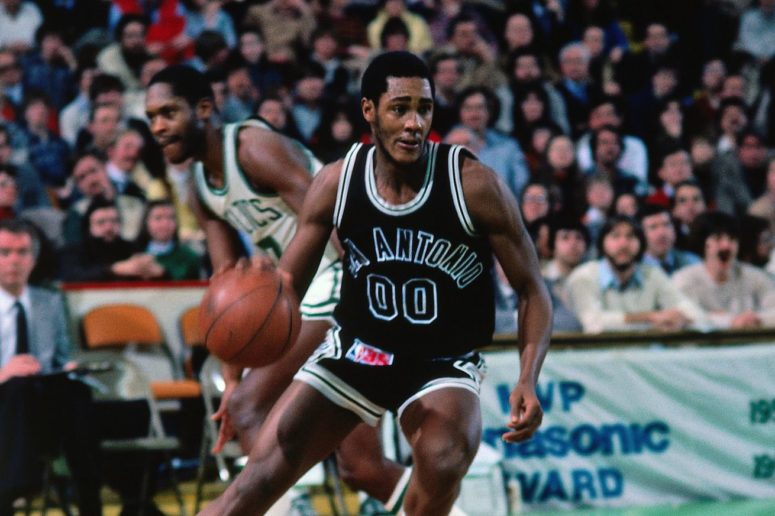 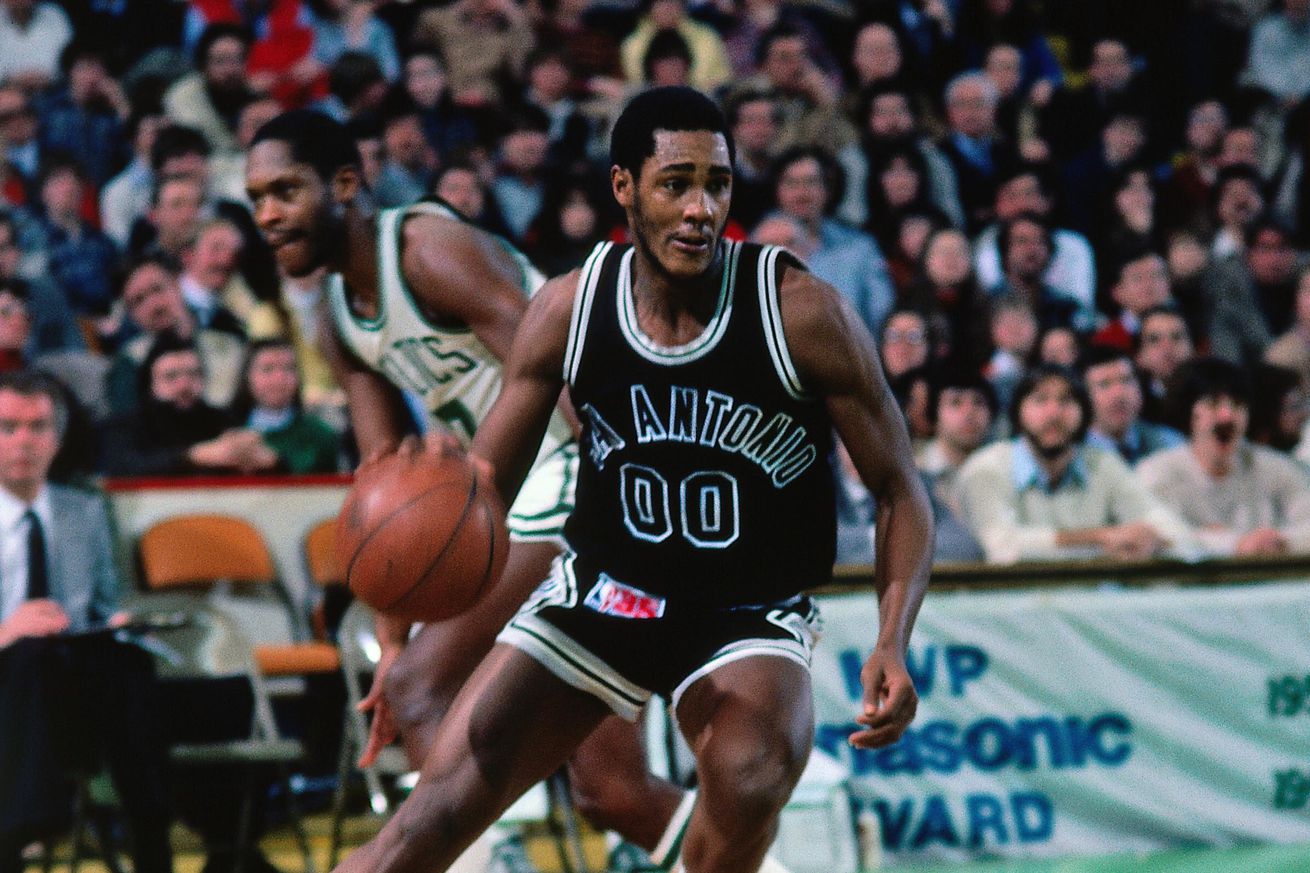 Meet the Spur who carried the team through its murkiest period.

What makes a player worthy of having his number retired? There are obvious metrics and arguable stylistic opinions. Judging players during seasons of celebration is an enjoyable exercise for all involved. But what can be said of a player who shined when the lights were dim? A player who did his damage when no one was looking? A man who literally fought for his life and came back to finish what he started?

This is the making of a phenomenon who paired exceptionality with modesty in truly Spursian fashion, before that phrase even meant anything. For his gift, today Johnny Moore is

HANGING IN THE RAFTERS.

The 3rd member of the Spurs to have his number retired is perhaps the most elusive. For one, Johnny Moore played during the strangest decade in Spurs history. His first five years with the Spurs had him teamed with George Gervin, whose long and storied career may have overshadowed Moore’s own greatness.

Soon after Gervin’s departure, the Spurs entered their dark period in which they tallied a record of 115–213 during four back-to-back losing seasons beginning in 1985 and running through the end of 1989 — which would be the last season before a naval officer named David Robinson donned the silver and black.

Moore’s basketball career began and ended with #00. At the University of Texas, Moore started in every game he played his entire career wearing that unique double zero. To this day his total 714 assists remains the record for the Longhorns. In 1979 he was drafted 43rd overall by the newly crowned champion Seattle SuperSonics but had his draft rights traded to the Spurs the following day.

While playing for 7 different Spurs head coaches, Moore had to prove himself time and again. For starters, he was fired during his rookie season by Doug Moe, but returned to the Spurs in 1981, suited up for training camp, got signed back to the Spurs, and then lead the team in both assists and steals while coming off the bench.

He turned the corner in ’81-’82 by leading the league with his 762 assists again as a reserve.

Moore’s style represented the ideal of unselfishness that would become evolutionary in the dynamic of a Spurs dynasty. The flowering of the Spurs “beautiful game” was rooted in Moore’s style. His command of the floor while feeding the league’s most prolific scorer set the stage for the following phase of Spurs superstars. But Moore was more than a facilitator; he could also take over the game. With his inimitable dribble and swagger, Moore’s teaming with Alvin Robertson created one of the Spurs best-ever backcourts. Together, the “Twin Terrors” shredded defenses night after night.

With Moore as the starting point guard, the Spurs finished their 1982-1983 campaign 1st place in the Midwest Division. In their playoff series against Denver, Nuggets coach Doug Moe targeted Gervin leaving Moore to take over. Moore responded by scoring 39 points in one game and dishing out 20 assists in another. The Spurs beat the Nuggets in the series 4-1. In the next round against the Lakers, at home with a chance to tie the series at 2-all, Moore had the following gem.

But the Spurs fell to the Lakers in 6, signalling the end to Moore’s honeymoon with San Antonio.

The following season saw the Spurs record their first-ever losing season. They broke even in 1984-1985, but had another losing tour to end George Gervin’s run — and winning seasons altogether until the end of the decade.

I was fortunate enough to watch Moore play. It was one of those nights I’ll never forget. I remember it was a Spurs/Nuggets game because my dad pointed out Doug Moe and mentioned he had once coached the Spurs.

Staying up past bedtime was enough reason to rejoice, but this night had an added bonus. We were going to stay after the game and try and get some of the players’ autographs. So with pen and paper in hand, we watched the game. Afterward, waiting around to meet the players, no ushers rushed us out. It felt like we belonged there.

My dad pointed out the players as they made their way out of the locker room and back into the arena where droves of fans were moving about. I got 15 or so scribbled, unreadable signatures on my paper. And then I saw him.

Johnny Moore was the one Spur who had a full crowd around him. Head and shoulders above the crowd, he was smiling and visiting with everyone. There was no sense of him being in a hurry, and he waited patiently while each and every fan got a chance to shake his hand, get a photo, or request an autograph.

His was the only autograph that was legible. And he stylized it too. He put quotation marks around the two os on Moore. I got it. It made sense. The #00 was part of his name, a part of him. I left HemisFair feeling like I was in on it; I had privileged knowledge.

Unfortunately, Moore’s career took an abrupt turn. In December 1985, he contracted a rare form of meningitis called coccidioidomycosis, or Desert Fever, which produces headaches and nausea. After surgery, which was pretty invasive at that time, Moore lost 30 pounds and missed the rest of the season.

The following season, Moore exceeded expectations and played 55 games, but he did not return to his previous form. Moore played 4 games the next season and on November 19, 1987, the Spurs waived him. He joined the New Jersey Nets for 12 days that December and played one game, his only NBA game not in a Spurs uniform, but still in his trademark #00.

After spending a year playing in Mexico, Moore re-joined the Spurs for the 1989-1990 season. Along with David Robinson, Sean Elliott, and Terry Cummings, Moore contributed to the second greatest single season turnaround in NBA history. At the end of the season, Moore retired.

After Moore, the number 00 was worn in 39 games by 2 other players. Neither William Bedford or Julius Nwosu made a significant contribution during their short time in San Antonio.

On March 20, 1998, the Spurs retired #00. Hanging proudly in the Alamodome along with James Silas and George Gervin, Moore received the validation he had struggled for. Shortly after, Moore joined the Spurs in community relations where he served until 2003. As an avid golfer, Johnny participated in many a Spurs golf invitational.

Since 2004, Moore has continued to share his basketball acumen as a head coach for a variety of leagues. He started with the semi-professional ABA Fresno Heatwave and continued coaching stints with Laredo Swarm, South Texas Stingrays, Corpus Christi Clutch, San Marcos Slam, and the Metzger Middle School Mustangs. He is currently the head coach for the Universal City Seraphim in the ABA.

During his NBA career, Moore scored 4,890 career points, collected 1,548 rebounds, and dished out 3,865 assists. He was the NBA assist leader in 1982. He is one of 19 players in NBA history to record 10 or more steals in a game. At the time of his retirement, he was the Spurs’ all-time assists leader. Only Avery Johnson, Tony Parker, and Tim Duncan have surpassed him over the last 25 years.

Johnny Moore’s career with the Spurs was laden with emotions than span the entire spectrum. His years with the franchise, both on and off the court, made him an invaluable member of the Spurs. Moore’s character during the 80s carried the franchise through the doldrums and toward heights from which we have yet to see a decline. His role in Spurs history is cemented, his jersey hangs high with the greatest Spurs to ever play — exactly where it belongs.