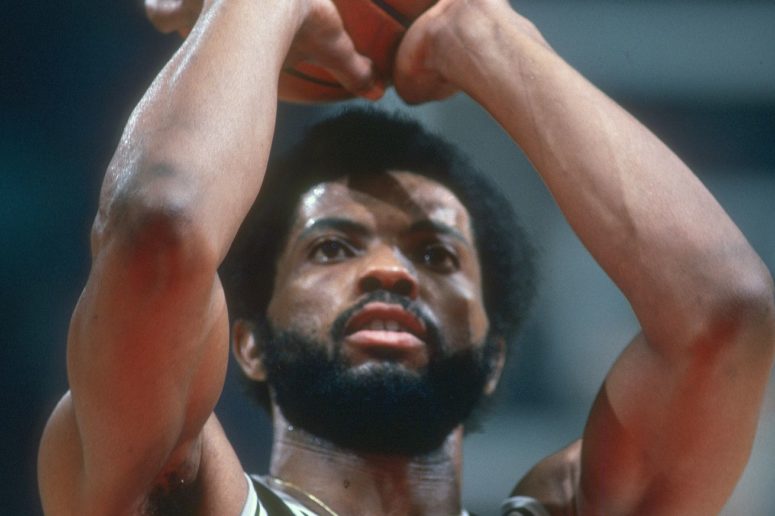 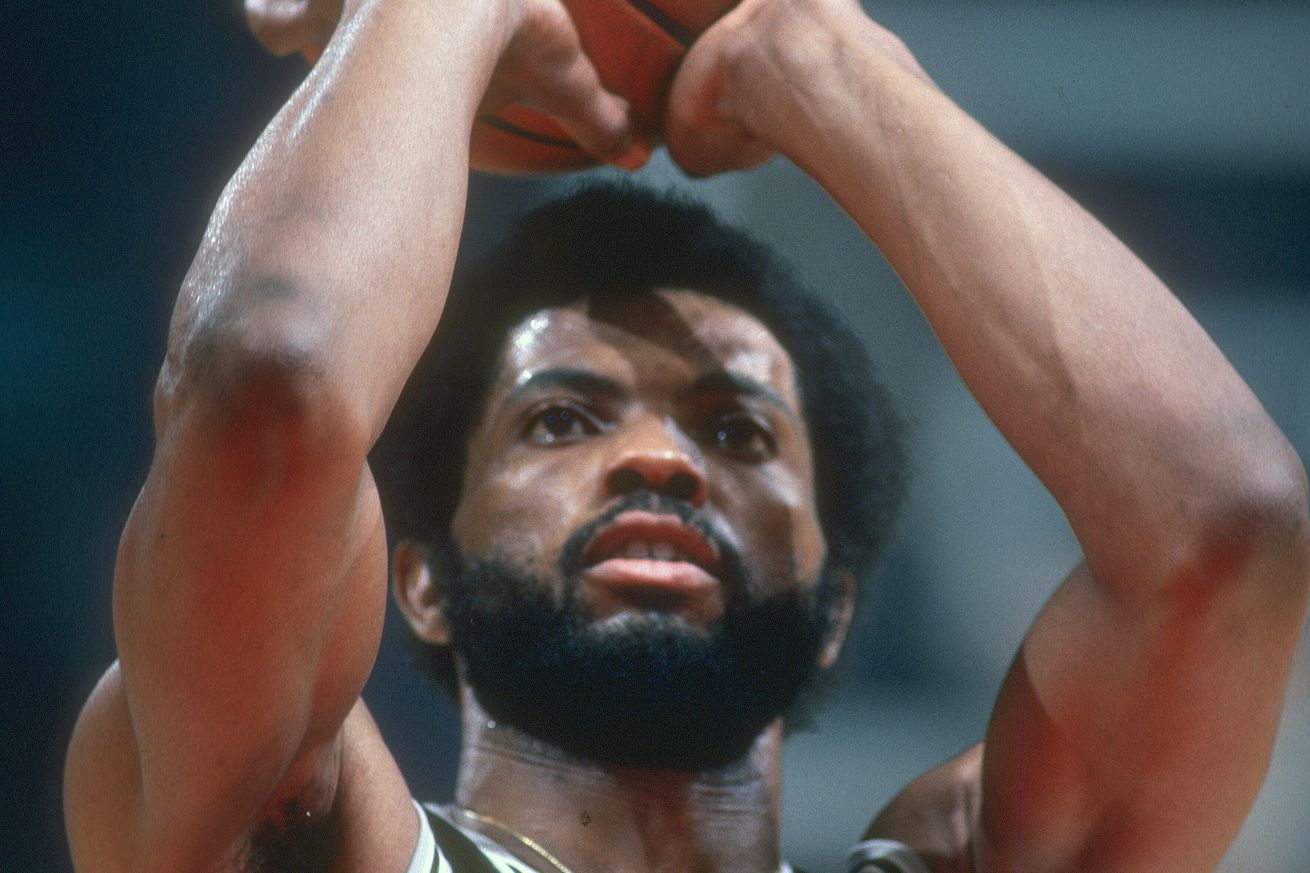 The first in a series focused on all of the jerseys the San Antonio Spurs have retired — starting with #13.

The tradition of retiring a number in the sporting world is the equivalent of lifetime achievement award. The ritual can be traced back to 1934. Cities celebrate their own by adorning their coliseum with the player’s jersey to hang for all to see. Year after year, fans old and new see the history of their team’s greatness cataloged through the addition of new members as their leading players complete their careers on court and head toward immortality.

In this series, we will discuss the numbers that have been retired by the Spurs. To date, there have been eight men whose impact on the culture of San Antonio has become so permanent that their personality and style of play is part of the Spurs lexicon. Each player is deserving for more than statistics, a game winning shot, or a championship. Each set a fingerprint on San Antonio and said “this is my home town, no matter where I was born”. These are the numbers that swell in the heart of a true Spurs fan. No matter who else wore that number, the jersey in the rafters belongs to the legend who hung it there.

On Tuesday, February 28, 1984, most of the country watched as Michael Jackson received eight Grammy awards for Thriller, the greatest selling album of all time. But far off, in a what has often been considered a remote corner of the universe, in the midst of a tragic season, a dedicated crowd of 7,583 die-hards gathered at HemisFair Arena to celebrate a greatest of their own.

If you are too young to remember the legendary HemisFair Arena, let me paint you a picture. Before the AT&T Center, there was the Alamodome. When adorned with an enormous blue curtain, this football stadium became a makeshift basketball court. Despite its massiveness, the Alamodome never felt as huge as HemisFair. For a ten-year-old Spurs fan, HemisFair was the largest room I’d ever seen.

And in 1984, during their first-ever losing season, that huge room could look so empty. But the energy of HemisFair never felt empty. Down on the floor, there were the Baseline Bums, dancing and cheering (no matter the state of the game). Scattered throughout the arena, groups of fans were peppered among the 16,057 seats. Parents introducing their children to the highest-level of local entertainment; eating hot dogs, sharing boxes of popcorn. Co-workers celebrating a night out. Season ticket holders standing tall. And way up high — almost touching the ceiling — in the seats set aside special, single rows of young, uniformed military officers sipped beer from clear plastic cups- their presence a representation of San Antonio itself. Their enthusiasm barreling down. Their gratitude ever-present. No Jumbotron to better see the highlights and replays. But they were enthusiastic all the same. If you went to get a snack you could walk the entire perimeter of HemisFair and not bump into anyone. This was the calm before the storm we now know today. This is how the Spurs became the SPURS!

And so on that winter night at halftime of a losing game, a more than half-empty arena scattered with family and friends, Baseline Bums and military members, San Antonians and the bud of what has become Spurs Nation, one man took center stage to be honored. That man was James Silas, number 13- the only Spur to ever don the number, in fact. His lone jersey would hang for almost three years before another would be added. Who was James Silas? Television footage of ABA games was non-existent and video footage today is in limited supply. Statistics tell you he was a dynamic point guard, but it is the oral history of his coaches and teammates that speak to who “The Snake” really was.

When the flailing Dallas Chaparrals made their move down I-35 to San Antonio, James Silas was with them. But that was not the beginning of his journey, or the end.

Silas grew up in Tallulah, Louisiana, a town with a population under 10,000. Some 540 miles from San Antonio, it would be a jagged roadmap that would bring the Spurs their first Superstar.

After graduating from McCall High School, young Silas left the remote Tallulah for Nacogdoches, Texas as a underclassman at Stephen F. Austin where he would play basketball all four years. In that time, he would be names to the NAIA All-American twice as well as leading his team to a 29-1 record his senior year.

Silas was originally drafted in 1972 by the NBA Houston Rockets but had been waived before the season began. “I felt like they knew they were going to cut me all along. But they waited until before the first regular season game. By that time, most of the rosters were stable. They should’ve let me go earlier to get on with someone else.” (http://www.remembertheaba.com/ABAArticles/PattisonArticleSilas.html)

With the 1972 season ready to begin, Silas was invited to come to Dallas by Babe McCarthy. Silas then joined the Dallas Chaparrals in their 1972 campaign and found success being named to the ABA All-Rookie team. The Dallas Chaparrals had struggled to gain a solid following in the ABA, and one year later were leased to Red McCombs and Angelo Drossos for $1, with an option to buy. On October 10, 1973, the San Antonio Spurs were born.

Upon landing in San Antonio, Silas found his stride in a Spurs uniform. His consistency as a Spur led him to back-to-back All Star appearances in 1975 and 1976 as well as being named to the All ABA Second Team (1975) and All ABA First Team (1976) in the same span of time. His nickname “The Late Mr. Silas” referred to his ability to take over the game in the fourth quarter and lead the team to victory.

Injuries plagued Silas’ legacy in the record books as his legendary 1975-76 season came to and abrupt end in Game 1 of the playoff semifinals when he broke his ankle. In addition, Silas wasn’t able to suit up in at the start of the 1976 season as he suffered torn cartilage in his knee when he collided during a preseason game. That injury and the two surgeries that followed would severely limit his playing over the next two seasons. Even after his return, #13 never fully recovered to his full-speed dominance. “Captain Late” continued to compete, but The Spurs could not get to the Finals in the NBA. In 1981, they suffered a Game 7 loss to the very same Houston Rockets that originally drafted Silas.

On June 17, 1981, The New York Times reported that the San Antonio Spurs had traded James Silas to the Cleveland Cavaliers for cash and a second round draft pick. Five days later, Silas would respond by calling the Spurs “greedy” and referring to the management as “jerks”. James would retire after only one more year in the NBA with exemplary yearly statistics including being in the top 10 for free throw percentage (85.5% career) in six of his ten seasons.

Accolades would follow including his selection to the Spurs’ All-Decade Team. And then of course, the announcement that James Silas would be the first Spur in history to have his number retired.

In spite of his greatness, Silas has taken offense that his ABA and NBA careers have been more or less separated, lowering his statistics and therefore stature in the longevity of the sport. For example, the NBA recognizes his 5,060 points, but his ABA/NBA total is 11,038. As a result, he has been overlooked by the NBA Hall of Fame while simultaneously being listed as one of the 30 players named to the ABA All-Time Team that commemorated the 30th anniversary of the ABA.

The NBA is taking full advantage of the ABA …they don’t include the true background and statistics (in the record books). This is very unjust and it’s very unfair. (W)hen I scored my 10,000th point they gave me a ball to recognize that I had scored 10,000 points for this franchise. If the franchise still exists, I don’t see how they can not acknowledge it in the stats…
20secondtimeout

Teammate Joe Hamilton shared how Silas would mentor him, staying after practice to play one-on-one; then staying even later to discuss the one-on-one. And that is where the Spurs tradition of mentorship began. Before Robinson handed it to Timmy, before Timmy handed it to Kawhi, James Silas was sharing his expertise with the next generation of Spurs players. And that is why James Silas will live in Spurs history forever. He played his heart out, night after night. He was a game changer. He left it all out on the court. And he shared his gift with those fortunate enough to be in his presence.

Silas continues to share his expanded basketball knowledge. In addition to the basketball youth clinics held by James and his son Xavier, Silas was integral in bringing the Midnight Basketball Program to Austin, his current home.

Despite Silas’ fiery opinions, the Spurs deemed his level of play worthy of retiring his number. James Silas: the one, the only. #13.

He once said the kind of thing every fan wants to hear about his home town, “I love San Antonio because San Antonio made me what I am today. A lot of my heart is still here. I have lots of friends in this city that are like family.”

NEXT UP- VOLUME 2: GEORGE “THE ICEMAN” GERVIN