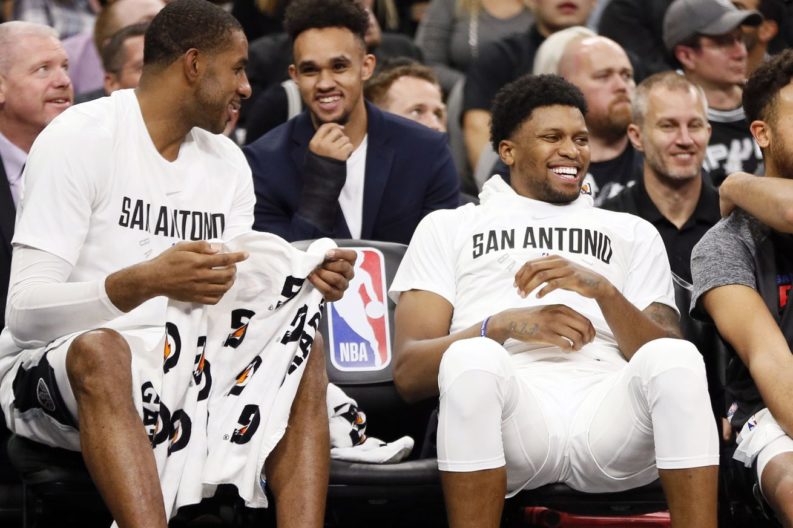 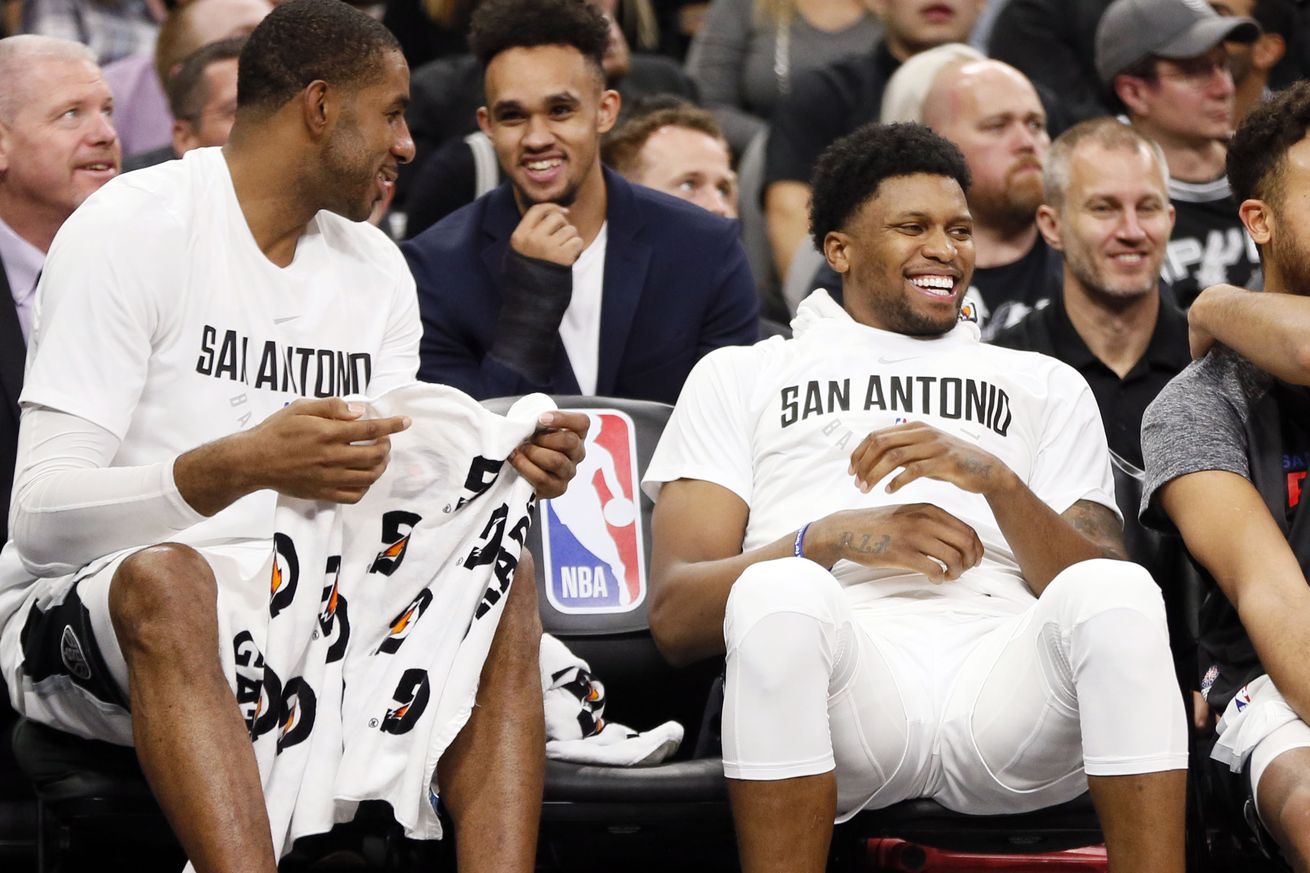 Spurs experts weigh in on the rest of the season.

Well if you thought All-Star Break was when we all go on vacation, you’d be only half right. For this week’s Round Table, the staff of Jesus Gomez, Marilyn Dubinski, Mark Barrington, Bruno Passos, and editor-in-chief J. R. Wilco are chiming in from 5 different locations. They may be separated by land, but are all here for the same purpose: to decipher what will become of our beloved Spurs over these last 7 weeks. Will the injury bug finally pull up his stakes and head out of the Alamo City? How will that impact San Antonio’s record? What did we learn from the 2018 All-Star Weekend? And what exactly is Tim Duncan up to?

Rudy Gay and LaMarcus Aldridge are rumored to be returning to action after the break. If Kawhi Leonard comes back, too. Will we get to see the Spurs at full strength on Friday?

Jesus Gomez: Maybe? I expect Aldridge and Gay to be available. Who knows what’s going on with Kawhi at this point. But the good thing about there being no timeline for his return is that it allows for optimism. He’s been out for over a month. He might be ready to play. Or not. Until he’s ruled out, however, I’m going to choose to live in a universe in which Kawhi returns on Friday.

Marilyn Dubinski: I doubt it. All signs indicate that Aldridge will be back by then, and the last we heard about Rudy (which was admittedly a few weeks ago) was he’d return when the ASB was over, but I’ve seen nothing indicating Kawhi will be back that soon. If the Spurs are back at full strength on Friday it will be the biggest shock of this season and show truly how amazing PATFO is at keeping secrets. If I had to put money on the soonest possible date they’ll be at full strength it would be the next home game on Feb. 28, but even that feels too good to be true since we’ve heard nothing about Kawhi’s timeline.

Mark Barrington: Greetings from Cabo San Lucas, where I am posting this from a coffee shop on my phone. I would love to see Kawhi back on Friday, although I won’t be able to watch until Monday.

Bruno Passos: Bet on health? In this confounded season? For the time being I don’t know if I’ll be holding my breath.

J. R. Wilco: I’m not falling for anything. I’ll believe the Spurs are healthy when everyone plays in a game. Not when they leave the injury report. Not when they’re announced. When they actually all play. Until then, my default mode is dubious.

Gomez: I’m embarrassed to say I missed it. I don’t even have a cool excuse, like Mark. The opportunity to hang out with some old friends came up and I took it. That’s how little I cared about the event. In my defense, I didn’t know I’d be missing the best All-Star game in years, according to several accounts. Something clearly worked about the new approach. Hopefully it’ll carry over to next year, when I’ll definitely tune in.

Dubinski: There was a semblance of defense being played! It was still a high-scoring game, but remember these are the best players in the world, and in basketball nowadays that also includes being able to score more than most. I think the good part about the new format is it made the captains want to “draft” a good team and prove their scouting skills over their counterpart. If nothing else it added some competitive spirit back to the game that had been lacking in recent years.

Barrington: Sorry. On a boat. Didn’t see it.

Passos: I heard the national anthem was something else but, alas, I was also unable to tune in. The NBA never sleeps, but I felt like All-Star weekend was as good a chance as any to recharge before the home stretch of the regular season.

Wilco: It was a fun game to watch. It had runs and flow and back-and-forth. Team Steph had the lead through nearly the whole game and Team LeBron came back from big deficits time and again, finally got the lead late and played good defense to pull out the win. They even overcame a horrible call (how can instant replay manage to both take forever and also screw up a possession call inside the last two minutes?) to do so. I’m proud that my oldest daughter watched the entire second half with me. The ASG might be back, y’all.

If everyone’s healthy, the Spurs will be one of the deepest teams in the league. How big of an impact will the bench to have during these last 23 games?

Gomez: The most used bench unit could include Parker, Ginobili, Gay and Gasol. Those four with any decent fifth guy could have made the playoffs three years ago. Now I’m not so sure they can consistently change games for the Spurs. The talent is there for them to make a positive impact, and so is the experience. All of those guys can create their own shots. Kyle Anderson should be deployed when more length and defense is required. They should be good, in theory, but I worry about the lack of athleticism a bit. How spry Gay looks when he returns will be a big factor.

Dubinski: It’s the Spurs so you would assume so, but it’s hard to say since we don’t know who that will include. Is Davis Bertans now permanently starting in place of Pau Gasol? How will Gay and Kyle Anderson’s minutes get figured out when/if Kawhi returns? Will players like Anderson and Forbes, who have performed admirably and beyond expectations, get pushed back into the third unit? Gay will certainly add a level of scoring the Spurs bench has been lacking when Patty Mills or Manu Ginobili aren’t on fire, so hopefully it will also push them back to being that group that blows games open and produces wins, not one that just treads water until the starters return.

Barrington: They’ve already had most of their impact by keeping the Spurs afloat while they were missing key players. They gathered tons of valuable experience during the season, but in the playoffs the bench just has less impact.

Passos: If everyone were healthy, all my preseason expectations for this team and its bench would be back in play. There’s enough depth and versatility on this roster to give any team trouble, and I imagine the Spurs’ point differential would creep back towards the league’s elite.

Wilco: If the reserves aren’t starting games, then they should be quite productive. It’s hard for me to buy into the team’s postseason chances without Kawhi (or even believe that they have any) but if The Cornrowed One returns by early March, I’ll be doing some serious recalibrations.

Will the Spurs win 50 games this season?

Gomez: It’s going to be tough. They should be able to do it if they are healthy. The next stretch is key. After a couple away games, they’ll have a a three-game, six day stint at home to get ready for the brutal Warriors–Thunder–Rockets trifecta that awaits. The schedule remains tough throughout, but they should have everyone back and clicking by the second half of March. If they can escape the next 10 with a positive record, 50 wins should be attainable.

Dubinski: 95 percent of the time, asking the Spurs to go 15-8 over a stretch of games is far from too much to ask. This season feels different. They haven’t been playing at a winning pace since late December (they are 10-13 since Dec. 28), and this year’s schedule is extremely back-loaded. If you include the 9th and 10th seeded Clippers and Jazz, who both have winning records, 18 of the Spurs’ 23 remaining games are against currently playoff-bound teams or ones that are very much still in the hunt. There’s nowhere close to 15 guaranteed wins waiting for them, so the Spurs will have to both get healthy and improve their production on the court dramatically if they want to keep their 50-win streak alive.

Barrington: It’s going to be close. If Kawhi returns sooner rather than later, yes. Otherwise, probably not.

Passos: I’ll guess a bit under at this point — maybe 48 — although a return to full strength would make me much more optimistic.

Wilco: Not without Kawhi and a bit of luck. Okay, a lot of luck.

Tim Duncan used his celebrity to help with Hurricane Harvey relief a few months ago. This week, Duncan endorsed Nico LaHood in his re-election bid for Bexar County District Attorney. Are we seeing a new side of the typically private Duncan? Do you expect him to be in the public eye more now that he’s retired?

Gomez: It’s tough to say. We are talking about helping out his home nation and a friend. I’m not surprised he stepped up in those situations. Hopefully he’ll open up more, because he’s a fun, smart guy to listen to. I still remember that interview he gave Richard Jefferson and Channing Frye on their podcast. It was great. I don’t expect him to seek the spotlight now that he’s retired — this is Tim Duncan we are talking about. But I hope he won’t shy away from it as much as he did when he was a player.

Dubinski: I don’t consider endorsing a candidate as being in the same category as hurricane relief for his home nation, which was in dire need and wallowing in the shadows of larger populations like Houston and Puerto Rico. We’ve seen Duncan endorse candidates in the past — maybe not through a video, but he and LaHood are friends of 20+ years — so it’s not that new for him. Overall I think he will still keep to himself unless he feels he has a personal commitment to something (or someone).

Barrington: Tim’s comfort zone is expanding. He is becoming a leader in his community as much as he was a leader on the court. Tim for president!

Passos: I think being out of the spotlight allows him to selectively control how he manages his celebrity and the type of influence he can have. I’m not sure we’ll be seeing it go too far beyond this, but it’s still very cool to see him elevate (and leverage) his profile for things that matter to him.

Wilco: I’m with Mark. It seems Tim is stretching himself as a person and growing more comfortable that it’s not a bad thing to use his influence when there’s something he feels strongly about. I’m excited to see where he goes from here.

If you have a question you would like posed to our esteemed panel, please post it in the comments section below.