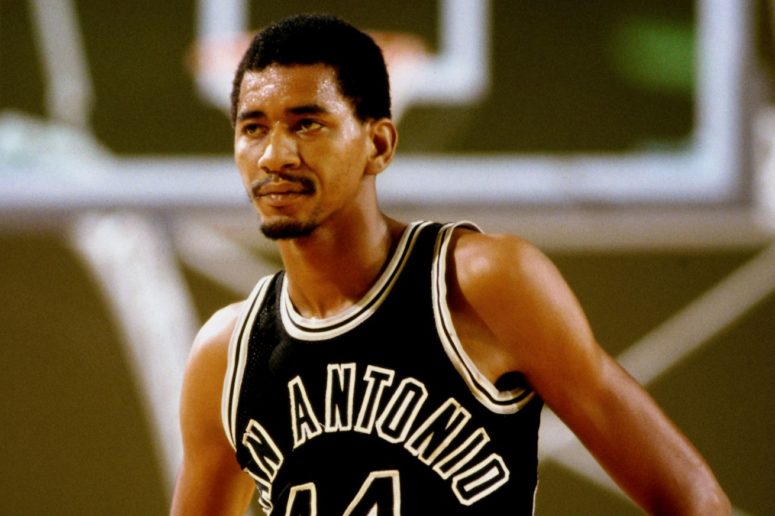 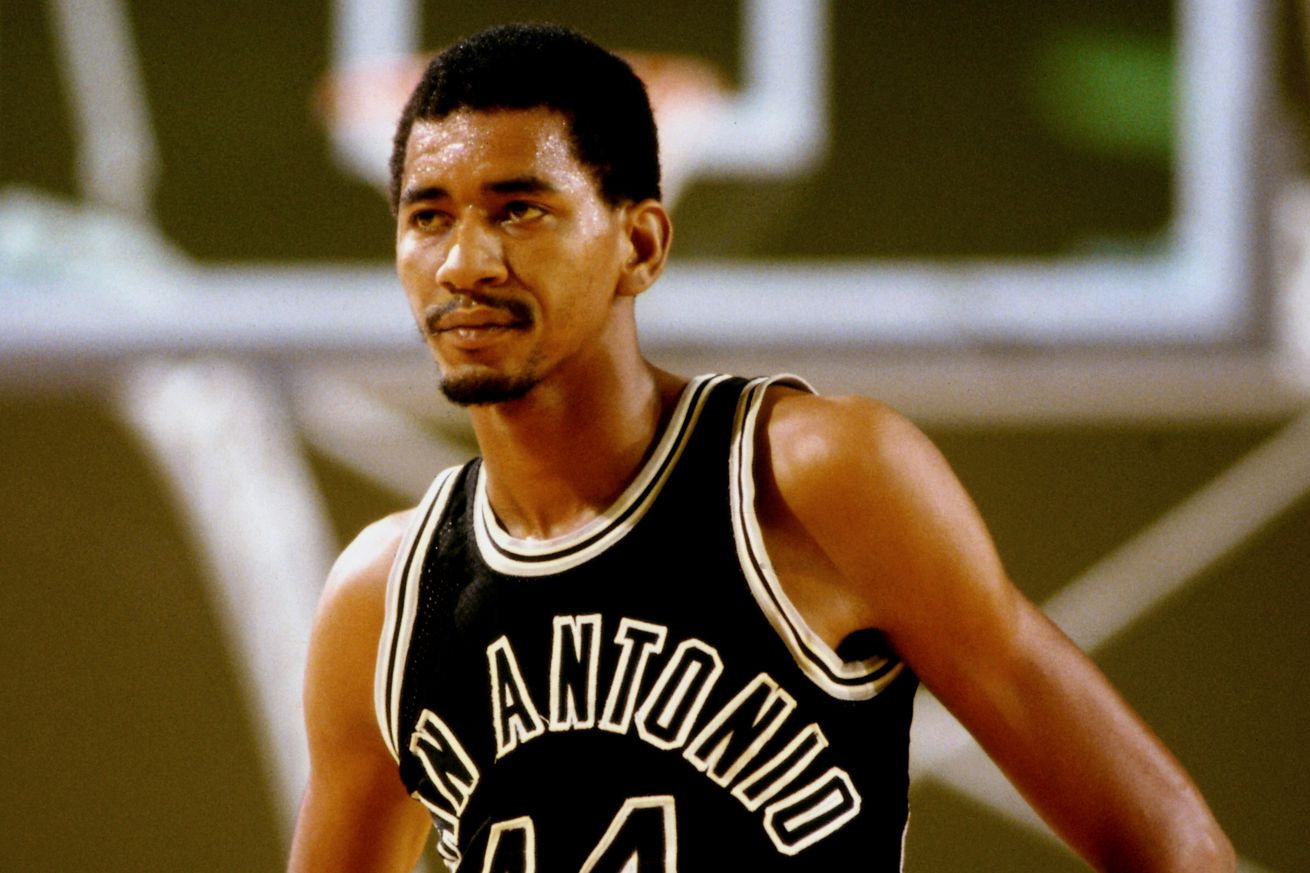 The Second Spur to have his number retired was the first to Pound the Rock.

It’s not just a name. It’s an attitude. It’s a style. It’s a design so unique that it only describes one man.

George Gervin. #44. The second Spur to have his number retired. No other Spur has worn the number and no other Spur will, because #44 is

Hanging from the Rafters

No other player to grace the ABA or NBA was smoother than The Iceman. On the court, he looked like he was floating. He had an elegance unparalleled in his time or after.

His greatness transcended his statistics, but the numbers are impressive all the same. Of his 14 seasons, 4 of which he played in the ABA, he appeared in 12 All-Star games and took home the All-Star MVP honors in 1980. He was the league scoring champion 4 times from 1978 to 1982 and consistently ranked as a Top 10 player in a variety of metrics. Year after year he was among the leaders in points, free throws, field goals, usage percentage — the list goes on. His points per game average was good enough to rank as the 9th best all time in the NBA.

On April 9, 1978, The Iceman and the Denver Nugget’s David Thompson were neck and neck for the season’s scoring title. In his final game, Thompson scored 73 points and would take the title unless Gervin could score at least 59. Before the Spurs’ game Doug Moe is said to have told the team to feed Iceman the ball until he had those 59 points. After missing his first six shots, Gervin tried to call it off only to have Moe overrule him, even pulling Larry Kenon for not feeding George the ball.

Not only did #44 secure the scoring crown with 63 points that night, he dropped 33 points in a single quarter, the most ever without the benefit of the 3-point shot. But despite all of the accolades, Gervin never ended a year with a Championship ring or an MVP award.

No one can deny George Gervin’s effectiveness. He had a seven-year run where he averaged no less than 25.9 points a game. In those years, the Spurs were competitive, but they never competed in the Finals: ABA or NBA. In hindsight, it might seem as if there was something missing — some element of player or team that wasn’t all it needed to be.

It’s hard to think of Iceman’s game apart from the finger roll.

A shot so difficult to defend when executed correctly, yet so hard to perfect. His speed and agility, his ability to move without the ball, and his penchant for stopping on a dime to elevate into his jump shot made Ice a superior offensive weapon.

He would rise above the defense, sometimes from as far back as the free throw line, and roll the ball into the hoop. He danced on the hardwood and would shake defenders before releasing a one-handed jump shot from 18 feet out. But there’s so much more to Gervin’s game than effectiveness. He didn’t just score, he made it look easy.

Gervin’s game seems perfectly suited for slow motion. There’s something about his movement and scoring that both demands to be savored, while still appearing so effortless. But it’s the deceptive effortlessness that needs to be looked past — absorbed and appreciated, but seen beyond — toward a truth so easily missed.

Nothing that looks so effortless comes without a lot of effort going into it.

As a child, I witnessed only a handful of games during the Gervin era. Rediscovering his game through the internet has been a crash course in technique. It’s easy to watch Gervin and feel like there’s a level of inherent talent to his game. As if his jumper was so smooth because he was born with it. Or a finger roll so feathery and accurate had to have been his birthright. But that belies the work it takes to make a motion so natural-looking.

Gervin worked on his game. The things he did, and the way he moved, they’re so eye-catching and impressive because of how unexpected and effective they were — but they weren’t simply parts of Gervin, no more than any supreme talent becomes elite without practice. He worked hard, repeating those skills we marvel at, and built his game until it became the masterpiece we know.

As any PtR reader knows:

Look at a stonecutter hammering away at his rock perhaps a hundred times without as much as a crack showing in it. Yet at the hundred and first blow it will split in two, and I know it was not that blow t hat did it, but all that had gone before.

Although that Jacob Riis quote became associated with the Spurs during the Era of Pop, you could argue it was already a part of San Antonio’s DNA. When did that first blow take place? When did the hammer first strike the rock? It was the moment a skinny Michigander — who had struggled to find his game in high school, had been kicked off his college team for fighting, had invitations for national teams revoked, was traded in a Virginia Squires fire sale and become a Spur.

Gervin was the first blow to the rock. Everything that has evolved in the history of the Spurs rolled right off the prestidigitatious fingertips of The Iceman like yet another effortless finger roll or polished jumper. James Silas had his number retired first, but Gervin was the first who truly wielded the hammer.

In the history of sport, yesteryear’s heroes were meant to bested. Records are broken and a lifetime of arguments form in bars, stadiums, and online for all to join. A young, ambitious player sees the bar set by those before and makes it his goal to surpass it. George Gervin didn’t have the bar. He was the bar. He didn’t set it and move on, he continued to better himself.

The excellence that transformed Gervin into “The Iceman” may have also been his Achilles heel. He was the game-changer, the playmaker, and the leader. But at the same time, he did not depend on his fellow Spurs to help him deliver wins. That teamwork element that’s been an essential part of every Spurs championship may not have been available to Gervin the way it was for David Robinson and Tim Duncan.

Perhaps Gervin’s approach stemmed from having 8 coaches during his tenure as a Spur. As an individual, he thrived; but with that many adjustments, it would be understandable that the best player on the team would carry the majority of the load himself. With so many coaches and personalities, it’s no wonder Gervin only stayed true to his game. Every Spurs fan knows that the authority Pop has brought to the franchise played just as big a role in the 5 championships as finding and shaping the great players that contributed to those titles.

Gervin’s outgoing play made him one of the greats. He said he played basketball to entertain the fans. His individual records are astounding. His outspoken nature propelled him into the limelight and made him a national star — in San Antonio.

Even after his basketball career ended, he has remained a prominent member of the San Antonio community. From motivational speaking engagements and commercials for local vendors, to his own George Gervin Youth Center and George Gervin Academy, Ice has cultivated a culture geared toward supporting at-risk youth and increasing family dynamics.

He didn’t have all of the Spursiness that the franchise would eventually be known for, that came later. But he had enough to hone his attack until it was deadly, and decidedly his. He had enough to play for something beyond himself, for the fans.

His play was dazzling. His personality infectious. His jersey flies proudly for all to see. You could take a silhouette of him in motion and it wouldn’t be mistaken for anyone else from his time. Or any time. That’s the stuff an icon is made of. That’s the role of a progenitor, a true original. That’s what it means to be #44 for the San Antonio Spurs.