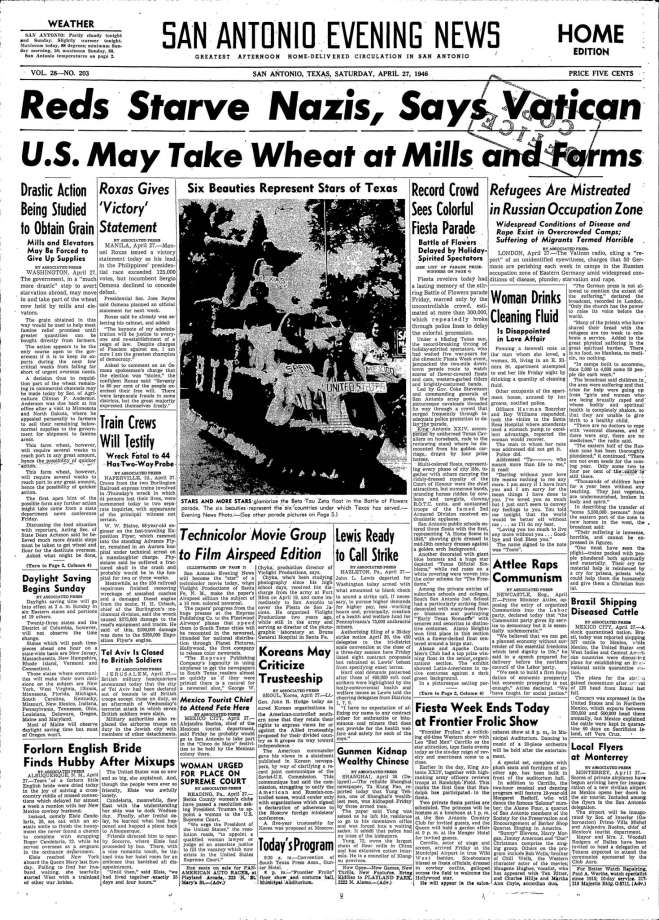 San Antonio’s seven-month wait for Fiesta falls short of the five years the party was put on hold during World War II.

Fiesta 2020, originally scheduled for April 16-26, will now take place Nov. 5-15. The March 13 decision to hold off on the event due to the coronavirus pandemic was the first postponement in a history dating back to 1891. Previous global events and emergencies, like both World Wars, canceled celebrations altogether.

READ MORE: The latest news and features about coronavirus in San Antonio

While anxious, some San Antonians are optimistic that the fall scene will be an unbridled party residents and visitors will flock to after being cooped up. Record shows San Antonio’s party predecessors did in April 1946, when the city was able to Fiesta after years of war.

The April 27, 1946 edition of the San Antonio Evening News reported a “climatic” scene of the first parade in a while. The “record” and “uncontrollable” crowd at the Battle of Flowers Parade which “repeatedly broke through police lines.” The article estimated more than 300,000 people showed up to watch the parade under a “blazing Texas sun.”

Fast forward to current times, the Battle of Flowers Parade, which is the founding event for Fiesta, attracts more than 550,000 people, according to the Fiesta Association’s website. The rescheduled date for this year is Nov. 13. Fiesta fans like business owner Garrett Heath believes history will repeat itself and the postponed party will be similar to 1946.