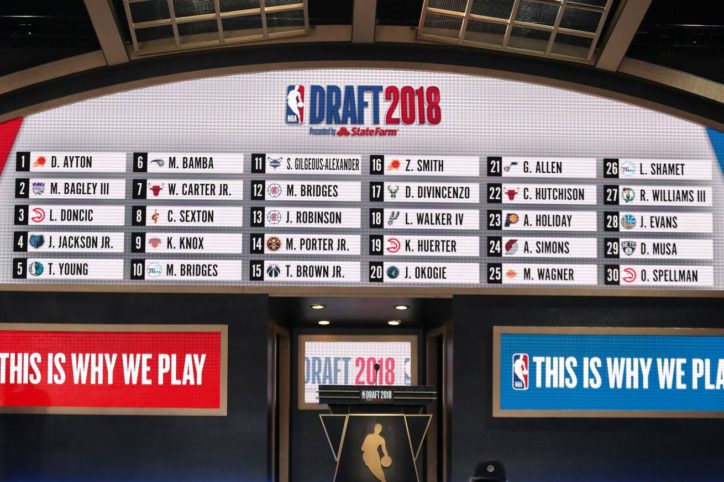 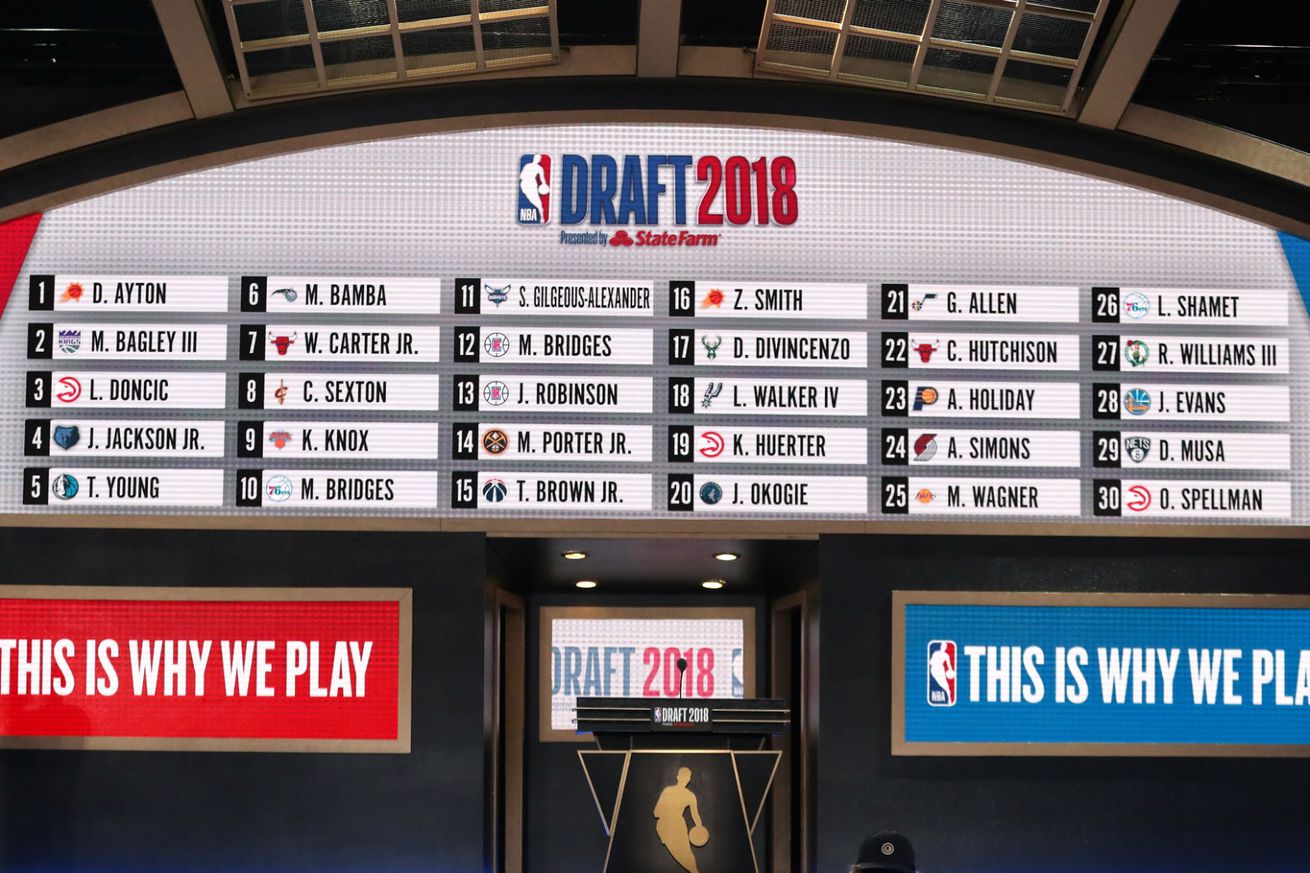 There are plenty of ways the draft could go.

The lead up to the NBA draft is always a wild ride, but this year could be even crazier than usual. Just consider everything that has happened in the last few days, the rumors that have come out, and some of the crazy facts about this draft that is already making it more interesting that most years.

The volatility of the draft makes it nearly impossible to put together an accurate mock draft. One unexpected pick or trade can change the entire landscape. Even with all of these unknowns, I have tried to piece information together to build some sort of framework around Thursday’s draft. Hey, one can dream right?

The top 10 could be eventful, but should also be predictable

Zion Williamson, Ja Morant, and R.J. Barrett will almost certainly be the first three players drafted on Thursday, in that order.

The Pelicans should want to trade down here. They have plenty of good selections at four, but it makes more sense for them to trade down for the number 8 and 10 picks from the Hawks. The Hawks are smitten on Jarrett Culver, so they would likely be willing to pay the heavy price for him. Davis is now in Los Angeles, and Julius Randle has declined his player option and is now an unrestricted free agent. The Pelicans should be looking to draft a big to pair with Williamson, preferably of the stretch nature. Drafting one at 4th would be a significant reach, so they might as well take advantage of teams’ willingness to trade up.

Picks 5 through 8 will almost certainly be De’Andre Hunter, Darius Garland, Coby White, and Cam Reddish (the exact order is unknown). That means the Pelicans will be able to pick whichever one of those players are still on the board at 8th. They can then pick the best big available at 10th, which is likely going to be either Jaxson Hayes or Goga Bitadze. I’d go Bitadze here for better floor spacing.

The Washington Wizards could pick one of the aforementioned bigs, but there seems to be a lot of signs pointing towards the Wizards drafting Sekou Doumbouya at 9th. The Wizards could throw a wrench in the entire draft if they put Bradley Beal on the trading block. Would Beal for Josh Hart, the number four pick, and the expiring contracts of Solomon Hill and E’Twaun Moore be enough to get a deal done? It seems like a win-win trade.

Ja Morant, Darius Garland, and Coby White will all be taken inside the top seven. After that, the next true point guard expected to be taken is Ty Jerome, who has a draft range of 20th or later. Nickeil Alexander-Walker is a solid combo guard who will likely be drafted in the teens by a team hoping to mold him into a point guard.

The Minnesota Timberwolves are a wild card in this draft

It had been reported for a while that the Timberwolves made a draft promise to Rui Hachimura, but recently their GM came out and said they don’t make draft promises. Hachimura seems like a good fit, but I could also see them going for someone like Alexander-Walker. They need to start building towards a future without Jeff Teague.

The Timberwolves have also reportedly put Andrew Wiggins on the trading block and have contacted every team about possible about trade up and trade down scenarios. I know most teams probably do their due diligence, but it really feels like the Timberwolves could go in any direction on Thursday.

The Hornets have worked out over 110 players this offseason. That’s a lot of workouts. Even so, I think they go with the best big available at 12th. Hornets GM Mitch Kupchak said in a recent interview that the team needs interior defense. One of Bitadze, Hayes, or P.J. Washington should be available when they are on the clock.

Players such as Nassir Little, Romeo Langford, Tyler Herro, Kevin Porter Jr., Keldon Johnson, and Alexander-Walker (if he has yet to be drafted) should all start coming off the board once the Miami Heat are on the clock. Little could also surprise some and be drafted earlier than this, but if not, he won’t last too long after the lottery. Picking at 13th, 15th and 16th (respectively), the Miami Heat, Detroit Pistons and Orlando Magic will likely take the highest wing player left on their respective boards.

The Celtics and Herro have been linked for a while. I think the prospects of losing both Al Horford and Kyrie Irving to free agency could shift their focus somewhat. They will likely look to trade all three of their first round picks to move up high enough to draft Garland. When that inevitably fails, they will have several options. They could stay the course and draft Herro at 14th, using their other two first round draft picks — 20th and 22nd — to fill bigger positions of need. They could draft Alenander-Walker if he’s still available and try to mold him into their point guard of the future. They could also look to find their Horford replacement — P.J. Washington would be an excellent pick here if he is still available. He can spread the floor, pass, rebound, and has solid defensive positioning.

With the Hawks potentially getting Culver in a trade with the Pelicans, they could take a flier on Bol Bol at 17th if no other team has yet to do so. Why not? The Hawks are shaping up to be an exciting team, and Bol would make them even more enjoyable to watch.

The Indiana Pacers could go any direction in the draft

I have no clue who the Indiana Pacers are targeting in Thursday’s draft. From what I’ve gathered they will likely be drafting the best player available. Because they are drafting at 18 th— right before the San Antonio Spurs — I have them selecting whoever happens to be at the top of my draft board at that point in the draft. We all know it’s going to happen, so why try and fight it? Just embrace the despair.

Spurs are finally on the clock at 19th

There are officially 21 players invited into the NBA draft green room on Thursday. That means at least two of those players will be available for the Spurs to draft at 19. While many of them are guaranteed to be gone at 19th, here are some names who could possibly, with varying probability, be available:

If I had to guess, I would say the players most likely to be available at 19th from this list are Johnson and Claxton. If one of Little, Bitadze, Hachimura, or Washington are still available at 19th, I expect the Spurs to give them a long look. Otherwise that list is pretty underwhelming, and I think the Spurs go with Luka Samanic or Grant Williams. Claxton or Mfiondu Kabengele could also be options if the Spurs go big at this spot.

As mentioned in my trade back article, I would also strongly consider calling the Philadelphia 76ers in an attempt to move back in the draft. This is especially true if Samanic or Grant Williams are the best options at 19th. One of those should still be available at 24th, and the Spurs could pick up an extra early second round draft pick (hello Jontay Porter). The 76ers seem keen on Matisse Thybulle, and they might fear that the Oklahoma City Thunder will take him at 21st, prompting their agreement to this trade.

I think in the end the Spurs play it safe and pick whomever is at the top of their draft board at 19th.

Celtics find their point guard at 20th or 22nd

Whether it’s Ty Jerome or Carsen Edwards, I expect the Celtics to draft a point guard here. I also expect them to draft a big with their other pick. I know they have made it pretty clear they don’t want to draft three rookies this season, but with their main veterans leaving in free agency, they may be having a change of heart. Their timeline seems to be shifting somewhat.

The Grizzlies seem open to trading their newfound draft pick, but if not, I expect them to select the highest wing who is available on their draft board to compliment Jaren Jackson Jr. and Ja Morant.

Not sure what happens in the picks before the Spurs are on the clock at 29, but there are a lot of exciting prospects in this range

I’ve been saying this for a while now, but outside the top couple picks in the draft, the end of the first through the beginning of the second round is the sweet spot. This is why I’ve been trying to send subliminal messages to PATFO to trade down from 19 or at least try and trade/buy/etc an early second round draft pick. Here’s some of the names to watch out for in this range:

While I certainly have my preferences (Okeke being my favorite from this list), I would trust PATFO with any of the names mentioned above. Horton-Tucker is a bit too much of a project for my liking, but I’m pretty high on most of these other names.

I hope the Spurs throw their name into the mix. They loved Jontay Porter last season. Other than injury concerns, he’s still the same player. He was never reliant upon athleticism, so concerns about losing athleticism need not apply.

The Spurs do not have a lot of open roster spots. They could certainly go the G-League or two-way contract route, but with two first round draft picks already on the books, I expect the Spurs to draft a player they can stash overseas. Some of the top international players who could be available are Deividas Sirvydis (if the Spurs are fortunate), Yovel Zoosman, and Vanja Marinkovic.

Even if the Spurs stay the course as one would expect, Thursday’s NBA draft should end up being an entertaining few hours of television. Though this could turn some heads, I would even be happy if the Spurs drafted Okeke at 19 and Porter at 29. They won’t need to worry about contributing in their rookie season — very few Spurs rookies do — so the Spurs could pay for their rehab and have them ready for the 2020-2021 season.

I’ve spent too much time worrying about what I think the Spurs should do in the draft. Now it’s time to let the cards fall as they may and trust that PATFO knows far more about who they should draft than I could ever imagine.

Everything we think know heading into what could be a wild 2019 NBA Draft
Source: Pounding The Rock