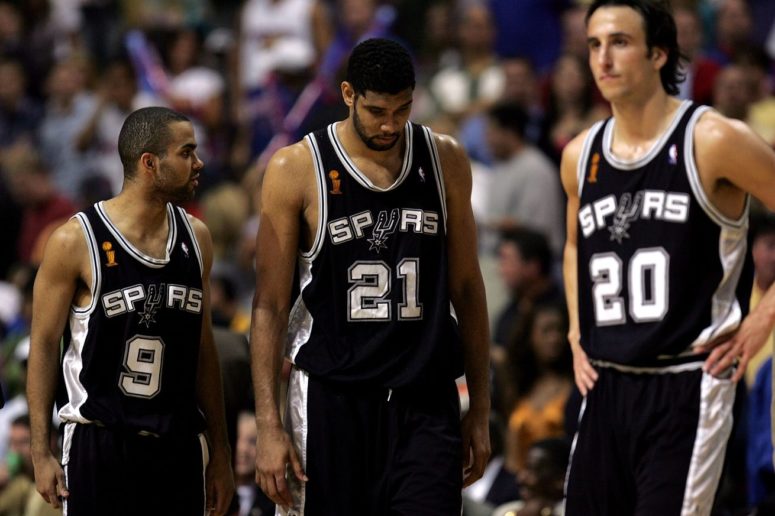 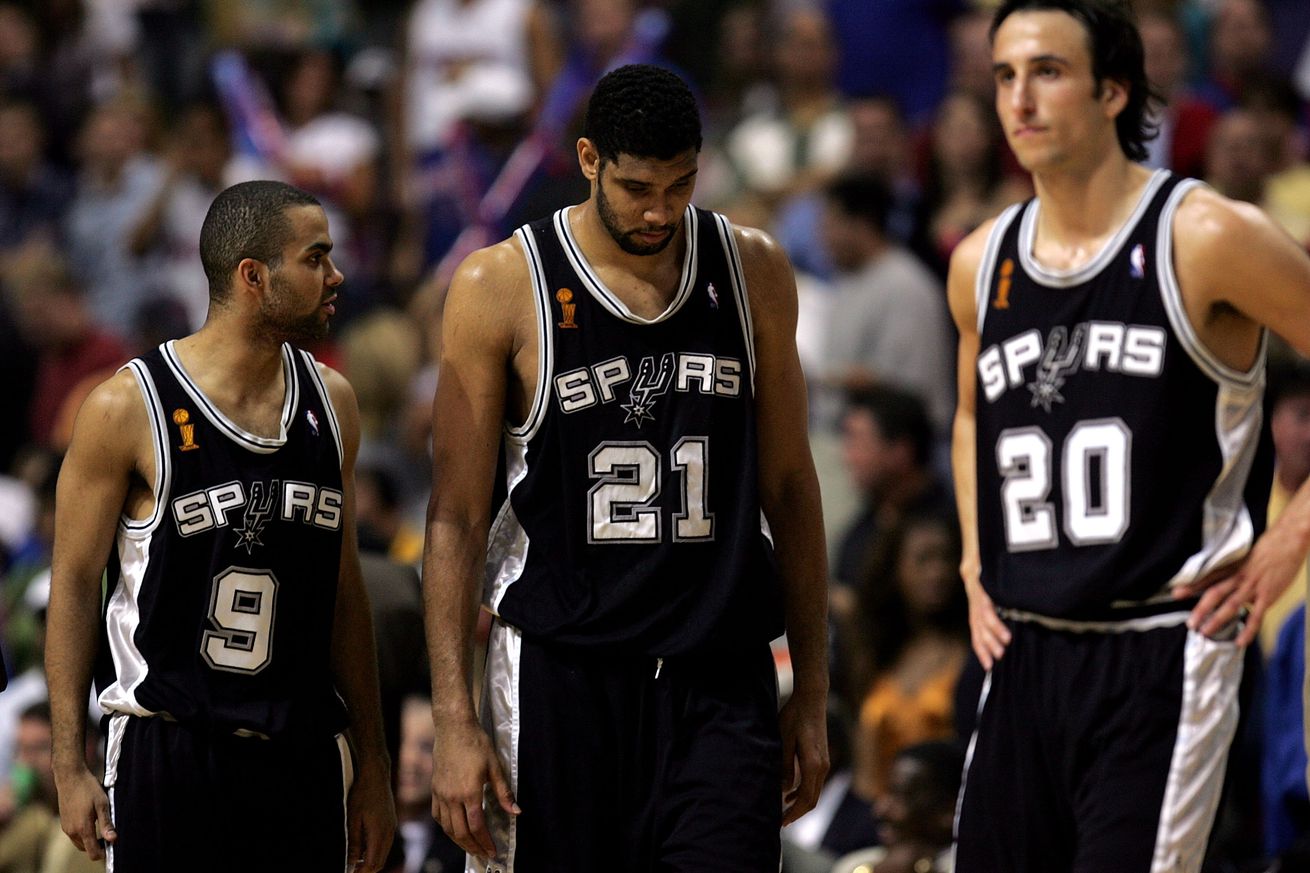 In the mid 2000s, the Spurs pivoted from a one-man show to ensemble, with Duncan remaining dominant while making room for two other All-Stars to produce.

Three is greater than one, and the Spurs, for all their success while prime Tim Duncan was their sole fulcrum, took another step forward with the ascent of Tony Parker and Manu Ginobili.

It took a few years, sure—Parker had been drafted in 2001 and Ginobili came over the following year, and both tested their coach’s patience early—but by the mid 2000s, it was clear Gregg Popovich had struck a balance on his roster, with his two international talents getting their own sets of keys to the offense. Such a shift also required the team’s incumbent megastar to adapt, and it’s probably been taken for granted how seamlessly Duncan made it all look.

It helps to view the Spurs offense of the early 2000s as a sort of singularity. Entire possessions would be dictated by Duncan receiving ball, more often on the left block, pivoting around his left foot to turn and face the hoop, letting it sway around his knees as he assessed the floor. Here, a dozen micro-calculations taking place each time, as he read the defense and acted, with his four teammates prepared to support as necessary.

A decade later, the Spurs were the antithesis of that: a basketball ecosystem as fluid as any the league has seen, with all five players reading and reacting and working in concert to generate the best quality shot possible.

The first step in that direction began as San Antonio evolved from a Big One to a Big Three. With more dynamic perimeter play, the floor opened up. Pick and rolls, predominantly a mechanism to either find Duncan in space or set up a post possession, became as much about the ball-handler as the roll man. Pocket passes and skip passes were more common. Lineups could be staggered more effectively, and Duncan’s minutes per game, which had hovered around the 39-40 range until the 2002-03 season, could now be managed better. The Spurs, slowly but surely, began their transition to a more egalitarian, free-flowing, beautiful game.

That’s not to say the early Big Three teams were a point-scoring bonanza. While their offensive efficiency trended upward with Parker and Ginobili’s increased usage, the Spurs were more a half-court team than ever, ranking towards the bottom of the league in possessions per game. Feeding Duncan in the post was still the team’s bread and butter—there were just more attractive alternatives now.

With Parker and Ginobili flanking him, Duncan continued to develop as a post passer. Part of this is thanks to having two crafty penetrators able to attack a scrambling defense.

But Duncan also knew better where to move the rock. With the floor spaced better, skip passes became a bigger part of the team’s ball movement, keeping defenses off kilter and opening things up for the corner three, already an analytics-driven point of emphasis for the Spurs offense.

The extra attention that Parker and Ginobili commanded, combined with the added off-ball movement, made life easier for Duncan, who combined veteran savvy with his remaining athleticism.

Whether in isolation or attacking breakdowns, Parker and Ginobili created their own shots with ease. This made the pick and roll highly effective, with Duncan’s man unable to ignore the off-the-dribble threat. When defenses didn’t rotate properly, a well-placed pocket pass could result in an easy finish for Big Fun. According to Basketball Reference, his average shot distance in the 06-07 season was 6.6 feet, the closest it would ever be, and plays like this are a big reason why.

In many ways, the 2005 Playoffs were the Big Three’s coming-out party, and the first title that really belonged to the trio. While Duncan still led the way in the Finals with averages of 23.6 and 12.4, Ginobili (20.8 points, 5.8 rebounds and 4.2 assists) and Parker (17.2 and 4.3) shared the load, and Tim would only barely edge Manu for Finals MVP, six votes to four. It was the consolidation of a team that could beat teams in so many more ways than what we’d seen from the Spurs before.

Around the Big Three, it was easier for more specialized roles to form. Bruce Bowen had already filled in as a specialist, shutting down opposing wings on one end and spotting up in the corners on the other. The system also benefited from complementing Duncan with low-usage, high-IQ big men like Fabricio Oberto and Rasho Nesterovic.

For Duncan’s career, the timing of the Big Three’s ascendance couldn’t have been better. As he approached 30, the days of him taking the ball rim to rim were mostly behind him—which was now fine with two younger teammates perfectly suited for it.

The sets that had been called only for him became more fluid, and allowed for the ball-handler to take the lead. Consider this PnR out of Horns action, a set that starts with the two bigs positioned on the shoulders, which was a Spurs staple in the mid 2000s.

Duncan’s game and efficiency on both ends remained consistent throughout this stretch. In 04-05, he got 20.3 points and 11 rebounds per game; in 08-09, at age 32, he averaged 19.3 and 10.7, while his minutes hovered between 33 and 34 over five seasons. Defensively, he held onto that extra step that allowed him to cover ground and anticipate multiple actions.

But time would take its eventual toll on Duncan’s body and game, accompanied by the implications of the iconic brace on his left knee. His numbers would dip in 2009-10, and again the next season, leading to pundits ramping up their annual predictions for the end of Duncan and, consequently, the Spurs as an NBA power—all of which seems slightly hilarious, in retrospect.