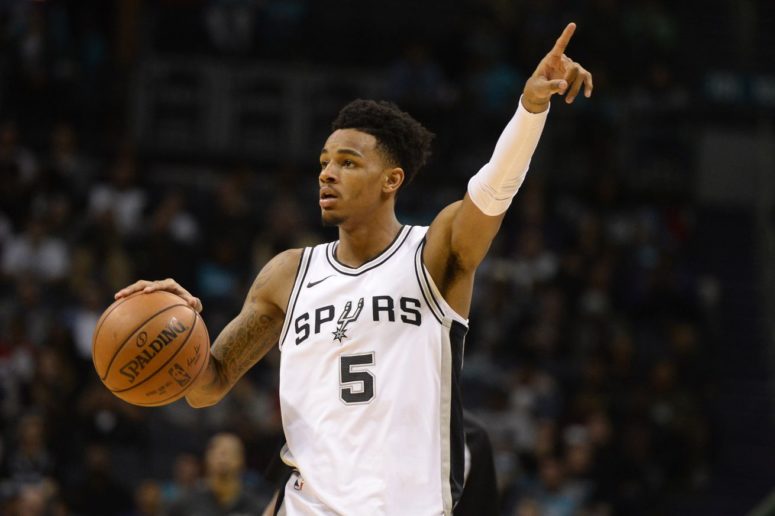 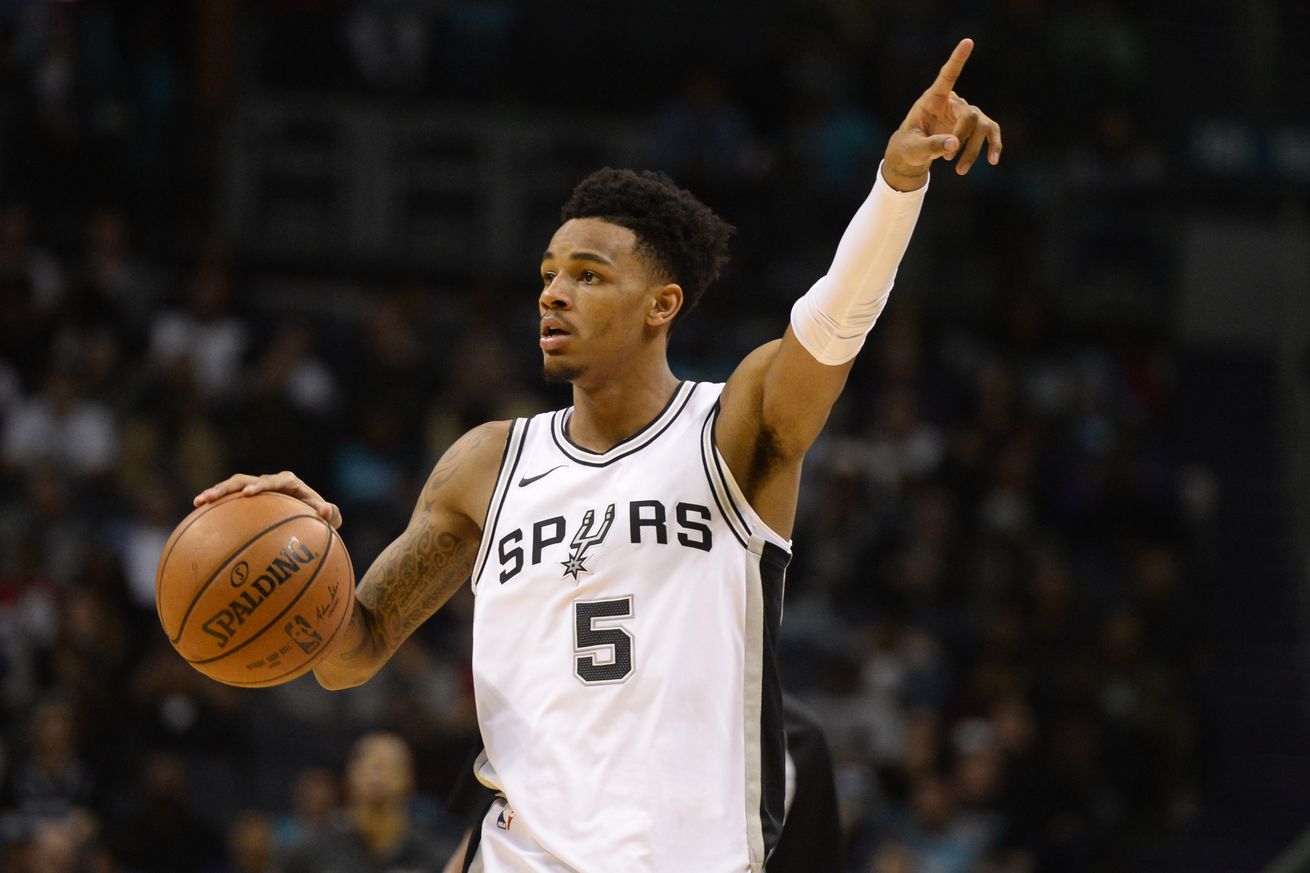 It seems like a long time ago, but Murray made some noise to start the season. He mostly did it thanks to his raw physical tools, but he looked the part of a starting point guard for a while. It was so exciting.

Then reality set in. There are only a handful of young players in the league who can excel on athletic ability alone. It’s even harder to thrive without veteran savvy when manning the point guard position and on a slow-paced team like the Spurs.

The fact is that Murray isn’t good yet. That shouldn’t be a surprise to anyone. He wasn’t supposed to be a one-and-done college player. Some unexpectedly hot play on a bad team was the only reason why he didn’t share a backcourt with 2017 No. 1 pick Markelle Fultz at the University of Washington last season. He was raw coming out in 2016. That’s why he was available where he was at the draft. The Spurs were ecstatic to be able to pick him. Fans loved him.

But that was then. Expectations grew as soon as he landed in San Antonio. He was touted as the Spurs’ latest steal; their point guard of the future. A few glimpses of potential in his rookie season only fueled the narrative. Tony Parker’s injury accelerated the timeline. Suddenly, Dejounte was expected to be ready. He was the starter. This was his chance to take that position for good, or at least put Pop in a bind once Parker returned. Instead, he unceremoniously lost the spot to Patty Mills seven games into the season.

It’s hard to measure these things, but faith in Murray seems to be at an all-time low right now among Spurs fans. That’s what not living up to expectations will do, even if those expectations were unreasonable to begin with. It would be easy to see his season so far as a failure, since he didn’t succeed in the way we were hoping he would — but that would be a mistake.

Murray has showed growth in his sophomore year. His handle is tighter, which has helped him cut down on turnovers. He’s trying to drive all the way to the rim more often instead of settling for floaters, like he did his rookie year. Defensively he seems much more engaged, particularly on the ball. Always a good defensive rebounder, this year Murray also crashed the offensive glass. Those were areas in which he needed further development and he has clearly put in the work.

Because he was thrust into a bigger role than the one he should be playing right now, the bad stands out. Sure, Murray’s handles might be better, but he still dribbles his way into turnovers by being careless. When he drives to the rim, instead of going at the shot blockers, he naively launches layups that have no shot of getting past the rim protector. He has to crash the offensive glass to make up for his poor shooting. On defense, he can get lost off the ball or caught on screens.

Considering how raw he was when he entered the league and how he recently turned 21 years old, that’s all understandable. The hero athlete that suddenly improves exponentially just because his team needs him only exists in the movies. Those rather cinematic first three games of the seasons obscured the fact that, in real life, development is a process.

It’s not the same for everyone, either. There are some prospects, like Parker or Kawhi Leonard, who are ready to go from day one. Others, like Cory Joseph, Kyle Anderson and apparently Murray, take a little longer. That’s perfectly fine. Being patient in these situations is smarter than jumping to conclusions. Dismissing a player because of who he is two years into his career is silly. Believe me, I should know.

Murray is not a starting-caliber point guard in November of 2017. But he is a better player than he was last year. That’s really all that can be asked of him now.

Maybe now that Parker is back, we’ll finally be able to evaluate his progress in the right context.

I’m obsessed with the Spurs’ offensive rebounding. It’s just something they’ve never focused on before this season. Now, they are allowing guys to crash the glass, and not just their center.

Kyle Anderson is not a big threat from outside. When he’s stationed around the arc, defenders leave him to pack the paint. In the past, that caused huge spacing problems. Now, not so much. It all has to do what how active Anderson is moving off the ball and going hard after offensive boards. When he’s not involved with a play, he doesn’t just stand around or jog back on defense. As soon as he senses a shot is going up, he leaves the corner and crashes the glass.

Typically that would be a recipe for bad transition defense, but since the Spurs have two big men who can shoot, at least one is typically around the top of the arc. Earlier in the season, when Dejounte Murray was starting, they occasionally completely inverted the floor, with Pau Gasol and Aldridge around the arc and Murray and Anderson crashing the glass. It was fun, unorthodox stuff.

Things are slowly normalizing. With Murray largely out of the rotation, the Spurs are missing one of their sneaky offensive rebounders. Anderson has more ball handling responsibilities, which might prevent him from crashing the glass.

Still, Slowmo will hopefully continue to hunt opportunities to get some offensive boards, no matter his role. It’s something he can do well that the Spurs need done.

Tony Parker is back! I have expressed my reservations about how much he’ll help elsewhere. I’ll stick to the positives here, and so far there has been every reason to be optimistic. My favorite thing about having Tony back so far is getting to watch him run the pick and pop with LaMarcus Aldridge again. I honestly didn’t know I missed it. It’s such an ordinary, even boring play, but it’s so effective.

It’s hard to run as masterfully as Tony runs it. Just look at this, carefully. Then watch it again.

Parker, even at this age, is still a threat to go to the rim. The big sinks deep because he thinks he’ll have to help. Then TP actually slows down to allow Dennis Smith Jr. to catch up, instead of throwing a hook pass too soon that would allow the switch. He also keeps his dribble alive long enough to see if the help defender is actually going to commit to rotating to Aldridge. When he notices he doesn’t, he makes the pass. It’s high-level execution. Patty Mills and Dejounte Murray, bless their souls, just can’t match it.

LaMarcus Aldridge has been fantastic so far this season, so it’s hard to say that he has actually missed Tony Parker. But I’m sure he’s happy his best pick and roll partner is back. And so is every Spurs fan.