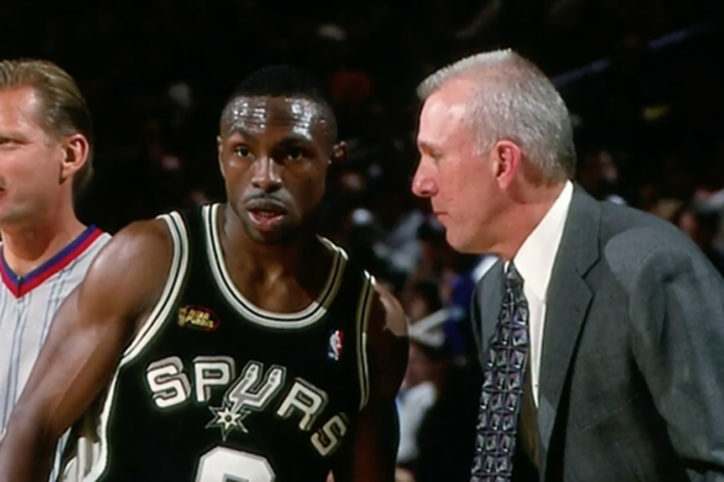 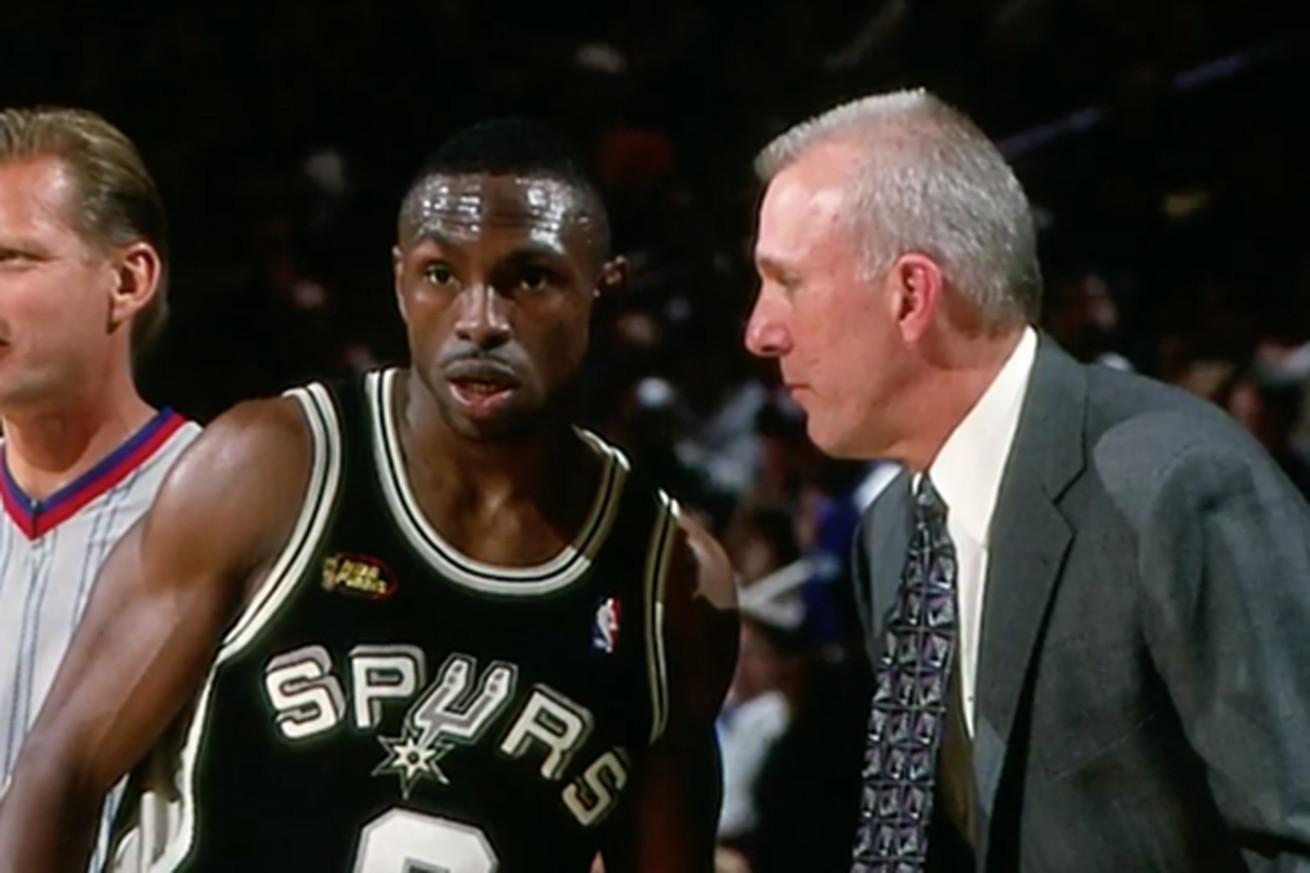 When The Little General talked, everyone listened.

We are back with 9 most Spursiest moves and skills of all time. Simply put these are the grittiest, most overlooked, and most singularly unflashy moves/skills in the San Antonio Canon. If you haven’t already, go back and check out our previous entries:

Next up is another player whose number hangs in the rafters, but not for the typical reasons. He was perhaps the Spurs’ most vocal leader of all time with a voice you couldn’t miss, and perhaps most importantly made at least two franchise-saving moves off the court. Coming in at number 8 we have:

To be fair, it could be argued that this is neither a move nor a skill, but that would be an assertion that ignores the whole in favor of the parts. There’s no denying that Johnson regularly displayed excellent vision and played a cagey brand of defense remarkable for a player of his physical stature, but even more remarkable was the sheer strength of Johnson’s resolve.

Having gone undrafted and then shipped back and forth between five different teams in the first eight years of his career (the Spurs twice), he remained determined to continue to strengthen as many of the facets of his game as possible. It was this determination that saw his FG% rise gradually from .349 his rookie year to .519 in the first year of his final return to San Antonio, and that also resulted in an almost fifteen-point(!) improvement in his defensive rating from his early tumbleweed years in the league. But even more than statistical improvement, it was Johnson’s resolve that molded the Spurs teams that he played for, and that kept a perennially also-ran franchise in the proper head-space needed to break through for that first glorious title.

The act of falling just short over and over takes its toll on even the most talented clubs, and the San Antonio Spurs of the late 90’s might have joined that lengthy and unfortunate group of also-rans if not for the galvanizing efforts of the smallest player on the team. It was Avery Johnson, after all, who called that famous season-saving players-only meeting in 1999, preserving not only Gregg Popovich’s job, but also the chance for the championship that Johnson had insisted (in a conversation with David Robinson) would be a requisite part of convincing Duncan to stay.

“Johnson recalled a conversation he had with David Robinson in which they agreed that the Spurs must win a championship, or else they risked losing Tim Duncan when his rookie contract expired at the end of 2000.”

And for all the assembled talent on the floor of Madison Square Garden, it was little Avery Johnson who without hesitation hit the clinching shot (mid-range, fittingly) that would set in motion a twenty-year course of excellence unmatched in modern sports.

While Robinson certainly set the franchise standard for loyalty, patience, and the sublimation of ego in favor of team success, it was the fittingly monikered ‘Little General’ who laid down the foundation for the displays of perseverance, single-minded tenacity, and grace under pressure that have become so synonymous with the Spurs franchise; a talent so ‘Spursy’ that it has often been either completely ignored or negatively rebranded in favor of words like ‘robotic’ and ‘monotonous’.

And that Ladies and Gents, is about as ‘Spursy’ as it gets.