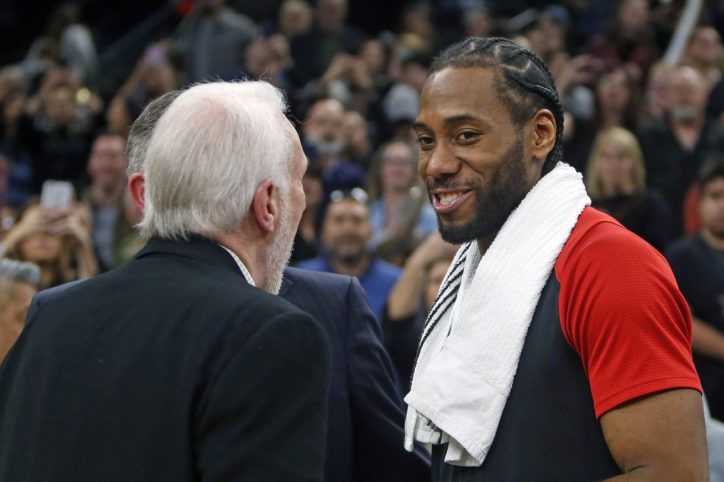 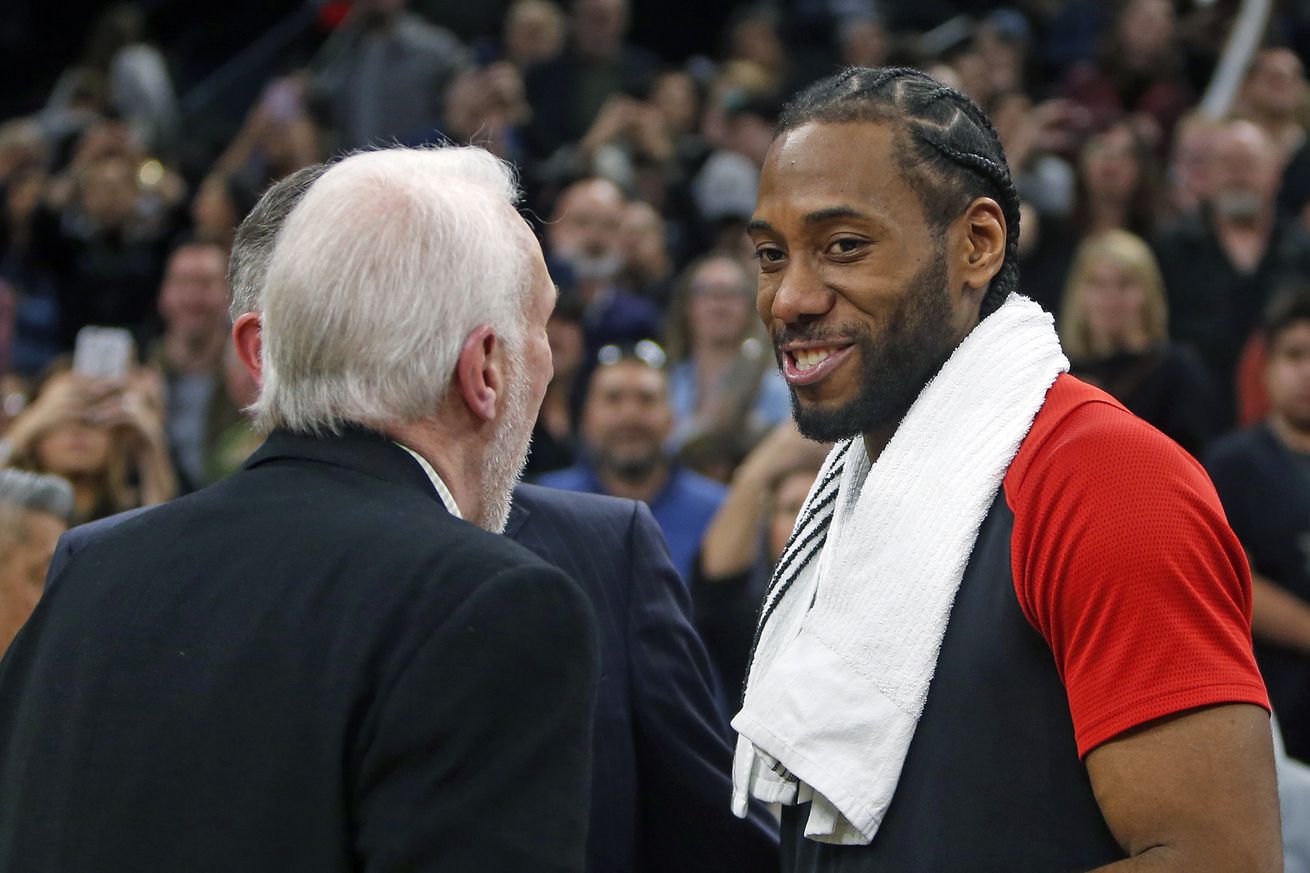 To the Raptors star from a San Antonio supporter

When I first joined this blog, I chose the username LeonardIsOurFuture. The past year has been a whirlwind of emotions for me. I didn’t come up with the handle because I thought it was cute or clever (it’s neither of those, really). I chose the name because I thought it was already set in stone. From the outside looking in, you seemed like a natural fit to replace Tim Duncan as the cornerstone of a franchise with a rich history of competing for and winning championships.

Your stoic personality was a blessing, until it felt like a curse. There will be some who claim they knew you were not fit to replace Timmy, and maybe they’re right. But for many of us, your fallout with the San Antonio Spurs was a complete shock to the system. It was to me especially.

You were my favorite player. Several years ago I waited in the freezing, rainy cold for hours just so I could obtain a Kawhi Leonard bobblehead before the game. My wife and I are fortunate enough to be season ticket holders, and you are the reason we decided to finally take the plunge. I have so much of your memorabilia my wife thought about trying to get me onto the T.V. show Hoarders. Watching you steal the ball and breakaway for a dunk is still one of my favorite things in basketball.

I remember obsessively tracking news outlets waiting for any news of you to break. Nothing substantial ever really came out, as many of the reports were contradictory. I remember exactly where I was and what I was doing the moment it was reported that you had been traded to the Toronto Raptors. After it happened, I just sat on my couch not really knowing what to do.

The Spurs losing you in the offseason didn’t make me less of a Spurs fan, and in retrospect, has actually given me more respect and appreciation for the organization. I didn’t like the trade at the time, but to be fair, I was never going to be objective about a trade involving you. Knowing what we know now, this entire situation has once again proven that I need to stop being an armchair GM and just trust the greatest front office in the NBA.

Some say you are socially awkward, and it’s something I’m far too familiar with myself. My inability to communicate with the outside world is something I’ve struggled with, and unless people have a similar personality trait, it’s difficult for them to relate to somebody going into hiding when the best solution is to face the issue head on. In most cases it’s not that I don’t want to communicate, it’s that my brain struggles to process how to communicate and often times leads to awkward situations not dissimilar to what we saw with you and the Spurs. Even stepping away from my typical analytically-driven article into a more personal piece has been challenging.

My affinity for you is why I was probably one of the last people to give up on hoping that you would stay in San Antonio. I defended you to my fellow Spurs fans until there was no more reason to keep defending. As has been mentioned on several occasions, and most recently by driftinscotty in a perfectly constructed comment on the Spurs blow out Raptors and spoil Kawhi’s homecoming, your silence about the entire situation, even now, is the crux of the fan-base’s animosity towards you — because your defense mechanism when being criticized seemed to be to call into question the character of those within the Spurs’ organization.

While I’m certain there was plenty of blame to go around, complete radio silence followed by digs at the organization who has supported you throughout your entire career only added fuel to the fire. Maybe you truly felt disrespected by the organization, but respect is a two-way street. Claims that the Spurs didn’t have your best interest in mind flew in the face of the entire history of the Spurs’ organization. Even during last night’s game, you turned your back to the jumbotron during the entire duration of your tribute video, and I once again felt the familiar pain of your rejection.

I sold my tickets to the Raptors’ game before the season even started. I thought at the time that I had zero interest in participating in such a circus. As the game drew closer, I started to have a shift in attitude, but I had no idea why. I genuinely couldn’t figure out if I wanted to attend the game to boo you, cheer for you, respectfully applaud your past accomplishments with the Spurs, or just attend as an innocent bystander. I ended up purchasing a pair of tickets the afternoon of the game.

While getting ready for the game, I dusted off my jersey of you, laid it on my bed, and debated whether or not to put it on. I even had a thought of wearing the jersey to the game, then throwing it on to the court while they were announcing the starting lineups. Of course, that probably wouldn’t have been worth the jail time or the fine (and it would have required a cannon to reach the court from where I was sitting). Ultimately, I chose not to wear your jersey.

I arrived at the AT&T Center having no clue as to how I was going to act during the game. I spent the majority of the game treating it as though it was a regular game. It had a playoff atmosphere to be sure, and that resulted in me jumping out of my seat on several occasions to cheer on a dunk, a Bryn Forbes three, or anything else positive that came from the Spurs’ on-court play.

I didn’t participate in the DeMar DeRozan “MVP” chants. DeRozan has been a fantastic addition to the Spurs — one could argue an even better fit than than yours, and his play has really helped me in my own personal healing process — but that is the first time I’ve heard the crowd chanting “MVP” to DeRozan. I saw it as more of a slight to you than a genuine response to the play of DeRozan. I certainly didn’t participate in any of the crowd-induced chants towards you. Booing you every time you touched the ball felt justified, but the “traitor” and “Uncle Dennis” chants were a bit much in my opinion. As long as the fans weren’t getting personal I saw nothing wrong with what transpired during the game. We as fans felt slighted by what happened, and we are all going to process things in our own way.

That said, I hope that last night was an anomaly. Not because I think it is classless to jeer the opposition — not at all. It is, after all, the fans’ job to tilt the scales in their team’s favor by creating an atmosphere that allows the home team to be energized in a way they can’t on the road. It’s called home-court advantage for a reason. I just hope last night was an anomaly because it will be impossible for me to look towards the future if I’m stuck in the past.

Once a person has lived on this planet long enough, they’ve certainly come across a situation similar to that of yours with the Spurs’ organization. Whether it’s with a family member, friend, or co-worker, everyone can relate to relationships going sour. Some breakups are amicable; others are not. Often times emotions get in the way, and create altercations that are not handled properly. Everybody makes mistakes. We can only hope to learn from these mistakes. While some relationships can be mended right away and others are left unresolved, more often than not it just takes time.

If the postgame embrace between you and Gregg Popovich taught me anything, it’s that any animosity that may have been felt between you and him has already started to heal, and that’s a beautiful thing. That embrace was easily the most emotional moment of the night for me, as it filled me with both euphoria and sadness in equal measure.

I’m a fan of a basketball team, and it’s the players on the roster that construct that team. It’s sometimes easy to forget, but you guys aren’t just members of teams. Your are human beings with the same flaws and struggles everyone else goes through. I may never forget you forcing your way out of San Antonio, but I can forgive. Last night went a long way towards me finding peace with everything that transpired over the past year. I hope everyone can find that peace. I feel certain that you and the Spurs have at least begun.