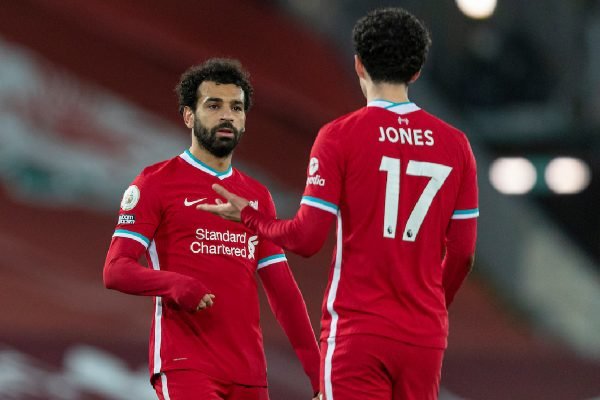 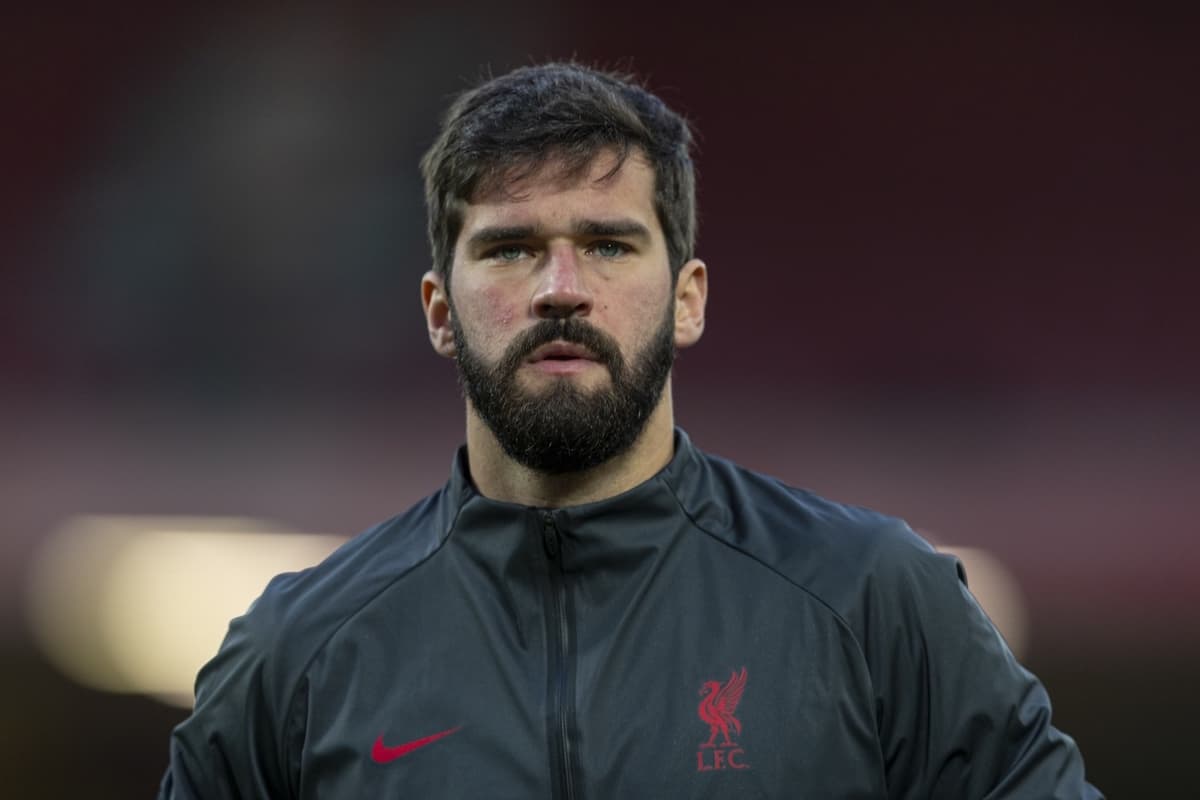 Liverpool’s 0-0 draw with Man United could be seen as two more points dropped in the title race, but without the intervention of Alisson it could have been much worse.

If there is one positive to take from a 0-0 draw that saw the Reds drop down to fourth, it was the success in shutting out a United side that had scored 22 goals in their previous eight Premier League games on the road.

Only once before in the current campaign had United not struck at least twice when away from home in the league, that being the 1-0 win over Burnley that saw them leapfrog Liverpool into first.

Leicester were the only side to have avoided a home defeat to United prior to Sunday, while in all competitions Ole Gunnar Solskjaer’s side had won nine of their last 11 games.

In the context of a frustrating result for Liverpool, this can be considered a positive, particularly given the many obstacles in their way when it comes to defence.

Without Virgil van Dijk and Joe Gomez for the foreseeable, and with Joel Matip losing his race against the clock to prove his fitness, Jurgen Klopp was again left with a choice of Jordan Henderson, Rhys Williams or Nat Phillips as partner to Fabinho.

Williams had started alongside the Brazilian for the FA Cup third-round clash at Aston Villa, but just as with the 1-1 draw at West Brom the 19-year-old was exposed for a lack of pace and positional nous in the Reds’ high line.

Similar had befallen Phillips, in the 0-0 draw at Newcastle, and facing the prospect of an attack featuring Marcus Rashford in particular, the duty fell to the captain for his second successive league start at centre-back.

Henderson himself would be the first to admit he struggled in his new role in the 1-0 loss to Southampton, but he was much-improved in his follow-up appearance. 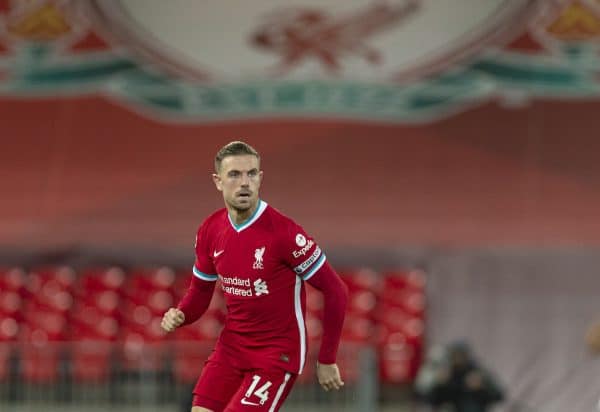 Interestingly, it came after a switch to the left-sided position, with Fabinho switching to the right – which, in itself, is arguably a more natural remit for the No. 3 – and it allowed Henderson to spring attacks with his long-range passing.

Far from the ideal solution, the pairing of Fabinho and Henderson was one of the bright points of Liverpool’s latest draw, and they should be dealt considerable praise for keeping Rashford, Anthony Martial, Paul Pogba and Bruno Fernandes at bay.

“Football-wise [they were] probably better [than two natural centre-backs],” Klopp told Sky Sports after the game.

“The way we played in the first half was really flexible, and we have two midfielders in the last line, so that helps in football moments.”

But when the chips were down, it was Alisson who proved the ultimate hero at Anfield. 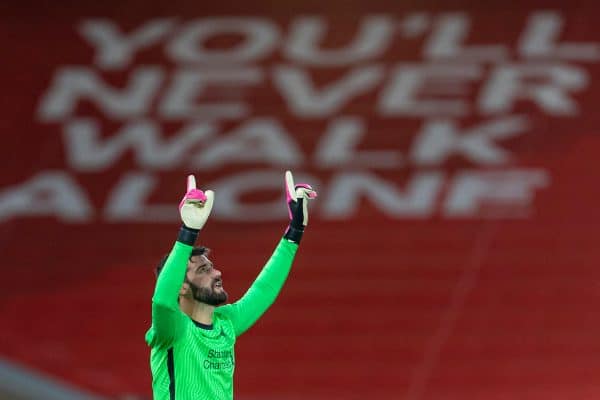 In the bitter cold, Liverpool’s No. 1 would arguably have preferred a busier first half, but such was the dominance his outfield team-mates enjoyed, United’s only shot on goal in the opening 45 was Fernandes’ wayward free-kick.

It had Alisson scrambling to cover his top corner, but the Portuguese’s effort sailed wide of the post and the Reds were kicking themselves for not going into the break ahead.

The hour mark had passed before United recorded their first shot on target, and for a goalkeeper of Alisson‘s calibre, it was a fairly tame strike from Fernandes, resulting in a comfortable claim as it bounced into his midriff.

But as the intensity increased and the visitors smelled blood, the value of the Liverpool stopper was hammered home on a more regular basis.

Having collected a weak header from Pogba minutes earlier, Alisson was drawn into a smart reflex stop with his feet as Luke Shaw cut back for Fernandes – six yards out, the midfielder’s sidefooted finish was cleared by an outstretched boot. 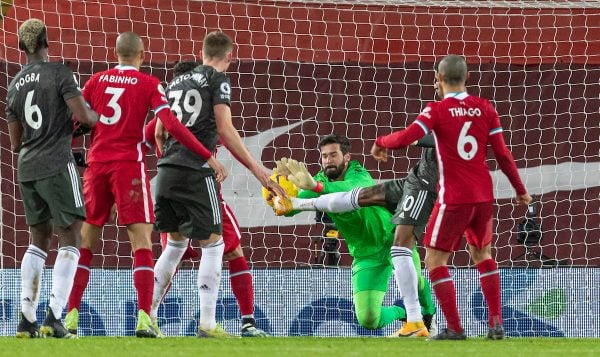 An even bigger chance went begging for United soon after as Aaron Wan-Bissaka’s scuffed pass found its way to Pogba, who powered a shot on target only to be clawed away by a well-positioned Brazilian.

“Well I think everyone would agree that they’ve got the best goalkeeper in the league, and two saves have kept Liverpool in the game,” was Jamie Carragher’s immediate reaction.

They were far from the best or most taxing saves of Alisson‘s career, but they were the decisive factor behind the Reds taking a point from the game, rather than none.

Liverpool now boast two reliable shot-stoppers in Alisson and Caoimhin Kelleher, but the gulf between the No. 1 and any of his Premier League peers is an overriding positive amid a glaring run of results.

Achterberg’s concise take was the importance of a clean sheet, but upon the Reds’ return to Kirkby, he and assistant Jack Robinson, aided by the analysis of Mark Leyland and Daniel Spearritt, will be equally as pleased with Alisson‘s all-round game. 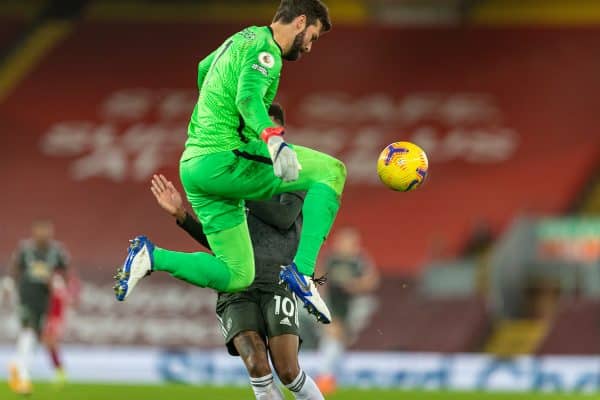 It was his bravery in coming out of the box, and his confidence as an outlet in possession as United sat deep, that helped the Reds maintain a stranglehold on the game – which, by Klopp’s admission, was let down by profligate finishing.

Alisson‘s 44 touches of the ball were only four fewer than Sadio Mane, while in completing 33 of his 35 attempted passes he registered the highest accuracy of any player (94.3%).

Only once – the wild 4-3 win over Leeds – has he conceded more than one goal in a single game in the league, and since the victory on opening day he has only shipped nine in 14 domestic appearances.

He has been hampered with injuries, but two more shutouts have come in three outings in the Champions League – those being in back-to-back wins over Midtjylland and Atalanta, the latter of which brought the best out of Alisson again. 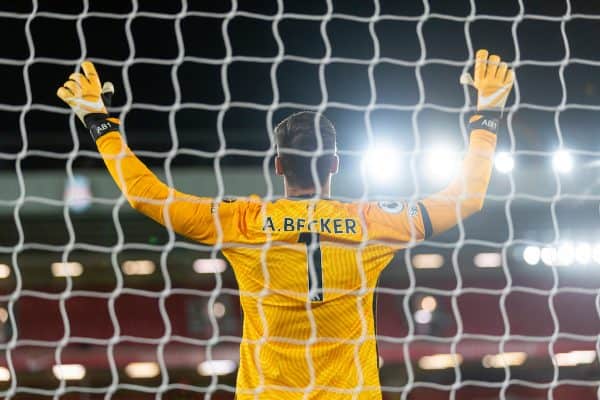 Though he cannot be regarded as the constant amid the turbulence of this strange season for Liverpool, and Kelleher is deserving of distinction too, there is cause to ponder where the Reds would be without their No. 1.

Sunday’s evidence, with Alisson bailing a wasteful front line out to salvage a point that keeps his side three points off the top spot, suggests they would be in a much worse position than they currently are.