About SFC Sports and Entertainment

The Spurs Fan Cave was created to UNITE all SPURS FANS who share in our mutual love for the Silver & Black. As one united Spurs Family, we come together to help the community through mentoring, volunteering and acts of kindness. We host events throughout the city, we sponsor community fundraisers, & we empower others that positively impact the community. We look forward to building strong long-lasting friendships with SPURS NATION and FANS around the world.

Our goal is to bring Spurs Nation together, host events that are inspired by the fans themselves, and support the community. We look forward to ONE UNITED SPURS FAMILY AROUND THE WORLD!

The Spurs Fan Cave works hard to bring you the latest news and rumors about the San Antonio Spurs. Our staff consist of journalist, photographers along with entertainers; we all do this for the fans. We believe in bringing the best quality news and entertainment about the Spurs to the FANS. The fans take center stage with Spurs Fan Cave and all we do would not be possible without your continued support.

Owner & Co-Founder of Spurs Fan Cave, he is also a crazy Spurs Fan! His entrepreneurial spirit has elevated our organization to quickly becoming recognized throughout the world. He believes that we must all come together to help the community. Spurs Fan Cave will continue to help support the community through service, mentorship, fundraising, community involvement and empowering others to pursue their passion. 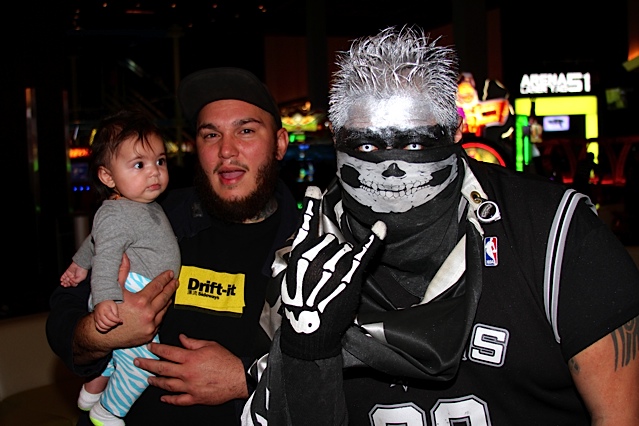 Robert Munoz (Spurs Phenom) is a die-hard Spurs fan who’s unique look and personality set him apart from the other super fans in SA. Spurs Phenom is a co-founder to Spurs Fan Cave and he gave us our name.

Spurs Phenom has been a Super Fan in the San Antonio community for a few years. You can find Spurs Phenom at Spurs games and Spurs Fan Cave events through San Antonio.

Mario Sosa, (Ol Skool Magee) is the CRAZY FAN with the BIG SPURS SIGN and has been a SuperFan in the San Antonio community for several years. He is the founder of the Spurs March which takes place  through downtown San Antonio, it brings Spurs Family together to help promote health & fitness within the community.  Mario Sosa also organizes the Power of One Summer Camp. You can find Ol Skool Magee at Spurs games and Spurs Fan Cave events through San Antonio.