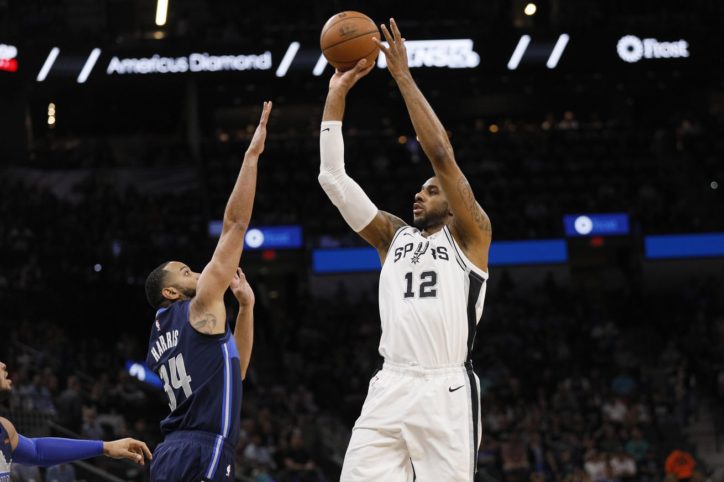 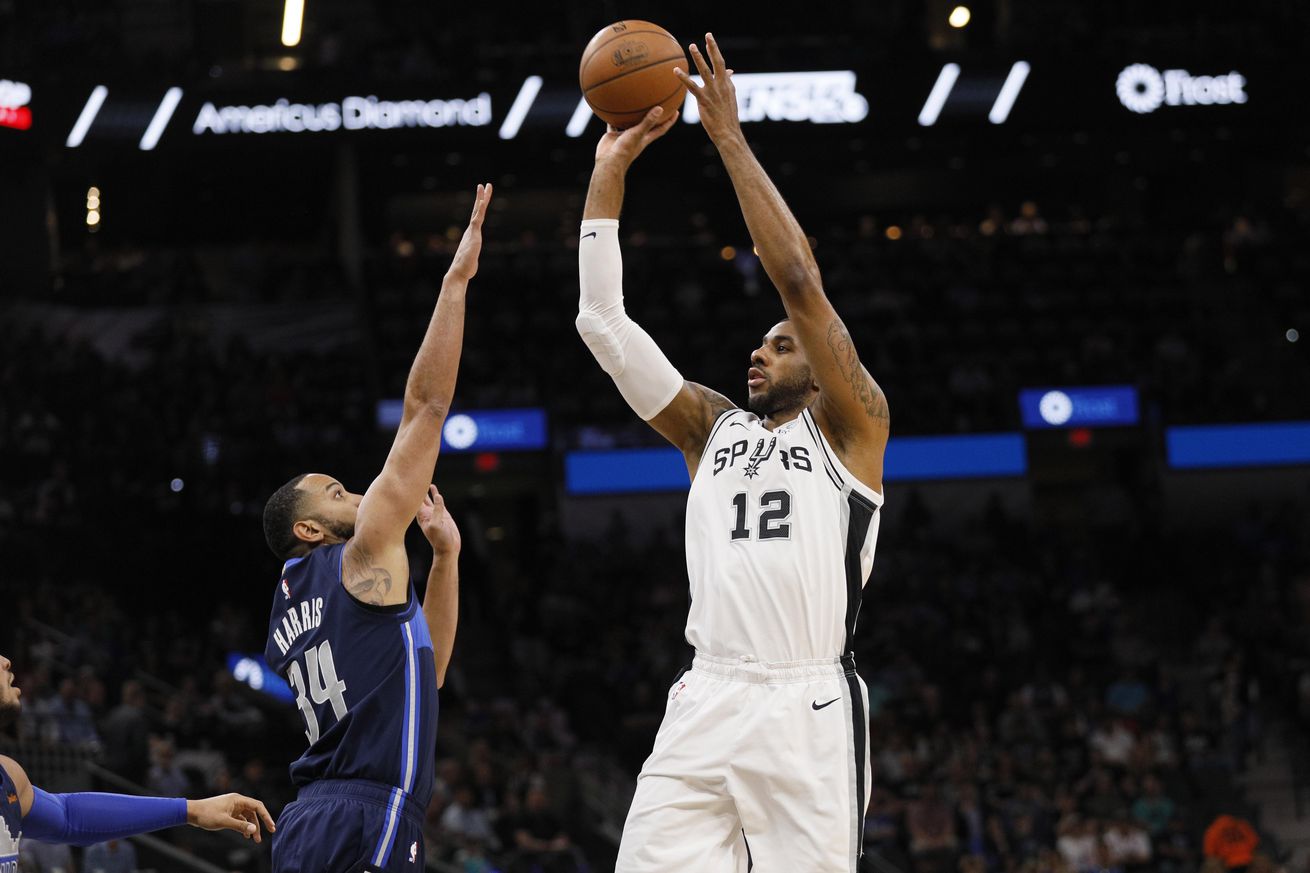 Despite a rocky start to the season, Aldridge ended up having the most efficient season of his career.

It was only two summers ago LaMarcus Aldridge was asking for a trade out of San Antonio. At the time, a trade probably wouldn’t have made too many Spurs’ fans upset. Aldridge had been coming off two sub-par seasons with the Spurs, adding fuel to the fire that he wasn’t able to thrive as a second option on offense.

Instead of trading Aldridge for pennies on the dollar, Pop and Aldridge met and worked out their differences, as you would expect from two professionals inside a top notch organization. A short time later news broke that the Spurs and Aldridge had agreed to a three year extension. Quite the turnaround. Aldridge rewarded Pop and Spurs fans the following season by having one of, if not the most, productive and dominating season of his career.

Even following Aldridge’s encouraging season, there were some questions that needed to be answered. Kawhi Leonard spent pretty much the entire 2017-2018 season anywhere other than a basketball court, allowing Aldridge to handle as much of the offense load as he could handle. His usage rate was nearly six percent higher than any other player on the Spurs’ roster. He had proven he could be a dominate player as a number one option, but the Spurs were not competitive in the playoffs, and they appeared to be facing a conundrum. Can a team be championship contenders with a dominant Aldridge as a number one option? Can Aldridge dominate as anything other than a number one option?

This season DeMar DeRozan joined the Spurs, giving them a second legitimate threat on offense. After having to endure the offensive woes of the 2017-2018 iteration of the Spurs, not having to rely solely on Aldridge was a sight for sore eyes. DeRozan spent the first six weeks of the season with the highest usage rate on the Spurs; four percentage points ahead of Aldridge. This stretch also coincided with one of Aldridge’s worst shooting slumps of his career, though it was unclear as to whether it had to do with usage, getting acclimated to new teammates, or it was simply a coincidence. Whatever the reason, his struggles were starting to become troublesome.

I wrote an article during this stretch noting that Aldridge was getting to the same spots on the court that he was the season prior and that a resurgence was in order. Even so, I had no idea he would end up turning it around to the extent he did. DeRozan and Aldridge evened out their usage for the remainder of the season, they become more comfortable working off each other, and Aldridge ended up having the most efficient shooting season of his career.

Aldridge handicapped the field with his poor start to the season. From the start of the season through November 30, he was averaging 17.8 points on 43.2/0/81.7 percent shooting. He was struggling shooting the ball from all areas of the court. He was also averaging two turnovers a game, which would have matched his career high. The Spurs were 10-12 by then and advanced metrics had Aldridge as one of the worst bigs in the NBA. The idea that he struggles as the second option on a team were starting to rear its ugly head.

One positive was that he was crashing the boards at a career rate. He was averaging 10.6 rebounds during that span, including almost four offensive rebounds per game. Unfortunately, even those rebounding numbers came with a caveat. Here’s an excerpt from my November article:

He’s not turning those rebounds into easy points. In 38 put-backs this season, Aldridge has only 39 points – in other words, he’s only making half of his put-back attempts. The 1.026 Points Per Possession (PPP) in such attempts is far below last year’s PPP of 1.377.

To be fair, matching his PPP of 1.377 last season would have been difficult. That number ranked 4th out of the 32 players in the NBA with at least 80 put-back attempts.

Although Aldridge’s rebound numbers would drop from 10.6 to 8.7 the remainder of the season, he started converting on his put-backs more often. His PPP ended up at 1.185, which was good for 19 out of the 42 players with at least 80 put-back attempts.

The biggest improvement starting in December came from his shooting. He went from averaging 17.8 points on 16.1 shots a game to averaging 22.6 points on 16.4 shots a game. His shooting percentages for the remainder of the regular season were an astounding 55/30.3/85.7. In the end, Aldridge finished with a field goal percentage of 51.9, which was the highest of his career. The same was true with his True Shooting Percentage of 57.6. I think it’s safe to say that he figured things out on the offensive side of the court.

The thing I enjoyed watching the most out of Aldridge in the 2017-2018 season was his shot selection. It resulted in a career year, and he closely mimicked it again this season.

I expect Aldridge’s three point attempt frequency to increase quite a bit next season. Pop has hinted as much, and it makes sense given the current makeup of the starting lineup. I think Aldridge has a better chance at succeeding as a shooter than DeRozan, so hopefully those mid-range and long two point attempts continue to decrease, and those become three point attempts instead.

Even after the rough start, Aldridge ended up shooting a better percentage than last season from most areas of the court.

His start from close range and the three point line was too much to overcome, but after starting 0-9 from distance, Aldridge shot his career average of 30 percent the rest of the season. He was shooting under 60 percent from close range the first six weeks of the season but still ended up shooting better than his career average from this range. He also shot nearly 4 percent better from mid range this season. With a better start, Aldridge could have put up unbelievable numbers this season.

Aldridge’s Defensive Real Plus Minus (DRPM) of 1.15 was ranked 46th out of the 72 players in the NBA that ESPN considers to be a center. While that number is certainly not great, a lot of that had to do with Aldridge’s poor start on both ends of the court. His DRPM was in the negatives for the first part of the season, so bringing that number to close to league average showed how strong he was after his early struggles.

This season, Aldridge’s win shares, box +/-, and VORP were all down from the numbers he put together last season. With that being said, they were all still above his career averages. Factor in the fact that he started as poorly as he did, and it’s easy to see why they were down somewhat. He still registered as one of the best players on the team last season. With his salary being the second highest on the team that should be expected.

Aldridge’s career efficiency during the regular season took a bit of a hit in the playoffs, where he averaged 20 points on 45.5/27.3/81.8 percent shooting. He also added 9.3 rebounds. 2.7 assists, 1 block, and only 1 turnover. In the end, Nikola Jokic likely got the best of him in their series, but Aldridge hung with him pretty well considering Jokic might be the best center in the league right now. He’s definitely the most versatile (at least on offense).

I spent a lot of time in my review of Patty Mills talking about his leadership, but Aldridge has really taken a giant leap in the right direction in this regard. He may not be the vocal leader that Mills is, but leadership comes in many forms. Aldridge has been leading by example. Fair or not, he has faced many accusations throughout his career of being soft, and he’s worked incredibly hard the past couple seasons to change the mind of those doubters. Those doubters certainly still exist, and their minds aren’t likely to be changed, but I was once a doubter, and now I’m a believer.

Aldridge just needs to continue down the path he’s been headed the past couple seasons. Embracing the three point shot is the logical next step for him as the starting lineup will be needing to find ways to space the floor. I’m all for this as long as it doesn’t take too much away from him bullying his way into the paint for easy buckets. Speaking of which, getting back to his 2017-2018 form of finishing at the rim would be good. He missed a few too many bunnies this season for my liking. Other than that, there’s not much else he needs to work on. I imagine he will continue taking on more of a leadership role next season, especially if Mills ends up being traded.

I would be remiss if I didn’t include Aldridge’s career high in points, though I don’t actually believe it was his best game of the season. Still, 56 points in a double overtime win against the Oklahoma City Thunder is incredible. I think as the NBA has switched into a different style of play, Aldridge has gone from slightly overrated as a player to being underrated. He can get buckets as good as anyone else in the league.

To me, Aldridge’s best game of the season came on March 24 on the road against the Boston Celtics. He scored 48 points in regulation, but also included 13 rebounds and 6 assists. It was a better all-around game than the one he had against the Thunder.

It was nice watching Aldridge explode against the Thunder and Celtics. They were two of the best defensive teams this season, but Aldridge is borderline unguardable when he’s in beast mode.

After a bleak start, Aldridge turned things around in the best kind of way. The bully ball style he’s exhibited over the past two seasons has been a joy to watch. He’s still shooting too many midrange shots for my liking, but he’s slowly working his way closer to the basket. I can forgive the slow start somewhat due to the fact he was getting acclimated to a new running mate, but I can’t completely forget it since this is for the entire season. His grade also got knocked down somewhat for his up and down play during the playoffs. Overall, it was another excellent season for Aldridge. If he can continue his strong play next season and the Spurs are able to stay healthy, I expect them to be a much better team than the one we saw this season.

Up next: DeMar DeRozan