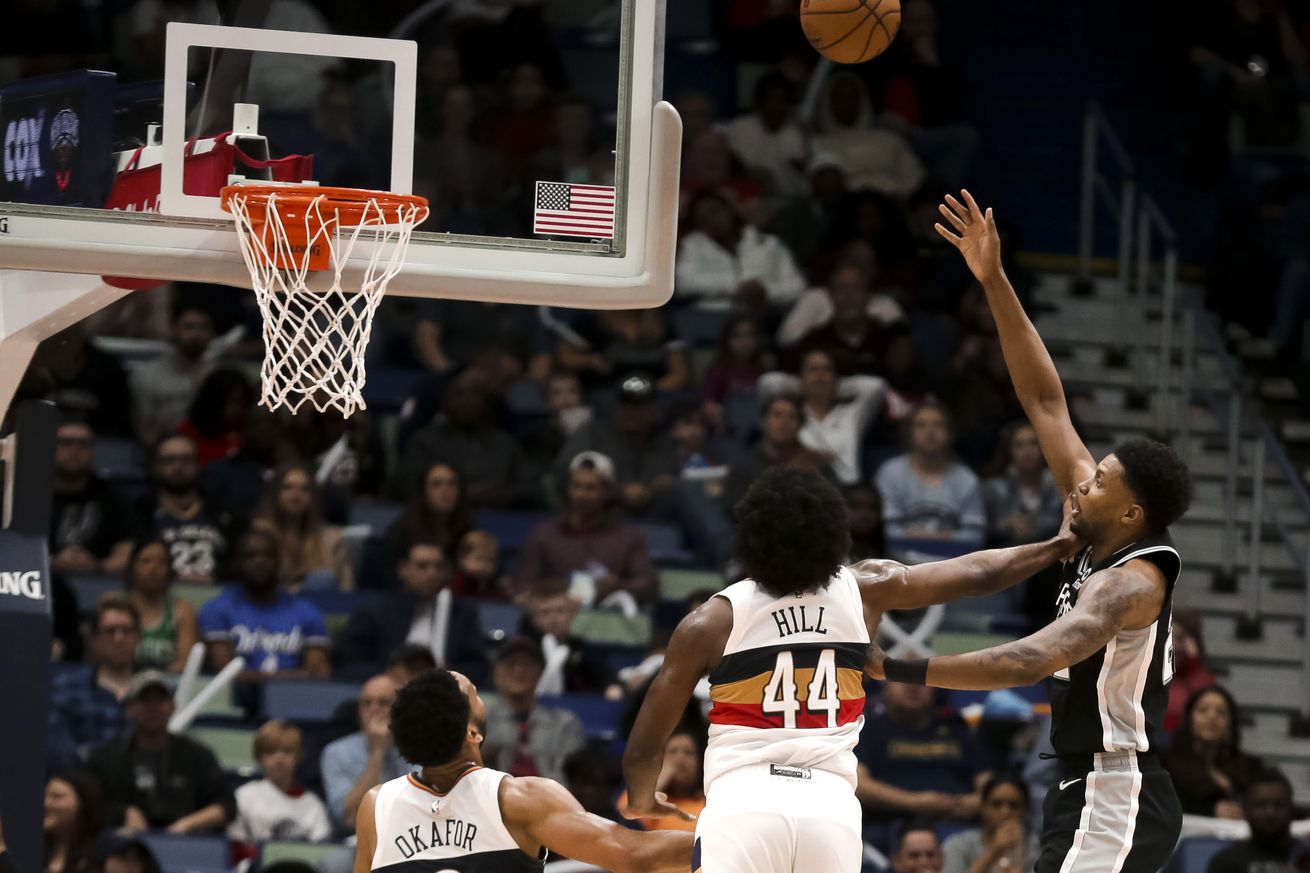 I never look forward to a game in New Orleans. No matter the occasion, the San Antonio Spurs really seem to struggle in the Smoothie King Center. Don’t let the arena name fool you, this place has been a house of horrors for the Spurs in recent seasons. Even with Anthony Davis, Nikola Mirotic, and Julius Randle all out with injuries, I dreaded this game.

The Pelicans ended up getting good production out of Jrue Holiday and Jahlil Okafor, but it wasn’t enough to keep the Spurs from enjoying a comfortable win on the road. The first half was a closely-contested contest, but the Spurs distanced themselves in the second half on the backs of LaMarcus Aldridge and Rudy Gay. Aldridge and Gay combined for 50 points (on 33 shots) and 23 rebounds. Even in a close win, a Rudy Gay ankle injury late in the game shows that nothing good ever comes from the Spurs playing in New Orleans.

Both the Spurs and Pelicans came into the game missing key rotational pieces. The Spurs were without DeMar DeRozan and Davis Bertans, but the Pelicans were without their three high-scoring frontcourt players. With Davis, Mirotic, and Randle all out with injuries, the Pelicans were missing a whopping 67 points per game of offensive production. Despite all the injuries to the Pelicans’ frontcourt, they were still able to find production down low in the form of Jahlil Okafor. Okafor ended up scoring 11 points in the first quarter on a perfect 5-5 from the field.

On the other end, Okafor had the difficult task of trying to contain the Spurs’ bigs. Not surprisingly, an Okafor-led frontcourt had absolutely no answer for LaMarcus Aldridge and Pau Gasol, with those two combining for 16 points on 8-13 shooting in the first quarter. Aldridge especially was able to get to wherever he wanted on the court. The Spurs were up 28-20 nearing the end of the first, but the Pelicans went on a quick 7-0 run, and the Spurs ended the first quarter up by a single point.

Quincy Pondexter made the most of his minutes in the second quarter, scoring a quick six points. Aldridge continued abusing bigs in the paint, ending up with 16 points in the first half. No offense to those two, but the only thing of consequence I want to talk about in regards to tonight’s second quarter is Lonnie Walker.

Tonight marked the first time this season Lonnie Walker IV saw minutes outside the garbage time minutes he got during the Toronto Raptors’ game earlier in the season. He fared well on offense, scoring four points in six minutes of action. He had a confident looking mid-range jumper quickly after checking in. Later on, he took it coast to coast for an easy layup. He looked aggressive on the boards, and looks like he will be able to use his athleticism to be an above-average rebounder at his position. On defense, he got stuck on a few screens, leading to a couple open looks from the Pelicans. He did a good job of getting his hands in the passing lane on one possession, resulting in a steal. The Spurs were an incredible +11 in those six minutes, so I would say overall it was a successful first stint for him.

Oh yeah, the Spurs couldn’t contain Jrue Holiday or Okafor in the first half, with those two combining for 33 points on 18 shots. All of this resulted in the Spurs taking a slim 60-57 lead into the second half.

The Spurs’ defensive intensity looked much better to start the second half. The team was more aggressive on the ball, and the defensive rotations were crisp. Rudy Gay had an excellent third quarter, scoring 11 points on only three shots. Aldridge continued getting whatever he wanted, and he ended up with 28 points and 12 rebounds after three quarters. The Spurs went up by as much as 18 points, but similar to the first quarter, the Pelicans ended the third quarter on a seven point run. The defense that had been so strong the first half of the quarter completely disappeared. As a result, the Spurs ended up ahead 96-85 heading into the final frame.

Marco Belinelli got the Spurs off to a great start in the fourth quarter, completing a four point play. From that point on, the Spurs put the game out of reach for good. The Pelicans gave it all they had tonight, but outside of Holiday and Okafor, they just didn’t have enough offensive firepower to stay with a Spurs’ team that was getting whatever they wanted on offense. The joy of watching Walker get solid minutes was spoiled somewhat by Gay injuring his ankle midway through the fourth quarter. Speaking of Walker, he was able to get even more minutes in the fourth quarter, hitting a nice looking corner three. He rimmed out a three pointer a couple minutes later, but his jumper looks good. He finished the night with seven points, five rebounds, one assist, one steal, and one turnover.

The Spurs end up winning 126-114 and are now 28-22 on the season, tied with the Utah Jazz for sixth in the Western Conference standings. The Spurs play a SEGABABA tomorrow night in San Antonio against the Washington Wizards. Hopefully DeRozan and Bertans will be ready to go, as I doubt Gay will be able to suit up. Regardless, we might get a chance to see even more of Walker.