For the first time, the clubs of the Premier League are set for a winter break this month.

After the hectic Christmas and New Year schedule left many clubs counting the cost of injuries and fatigue, the 13-day breather cannot come soon enough.

But it’s already caused controversy, with this week’s FA Cup fourth round replays slashing the amount of downtime some players will get. 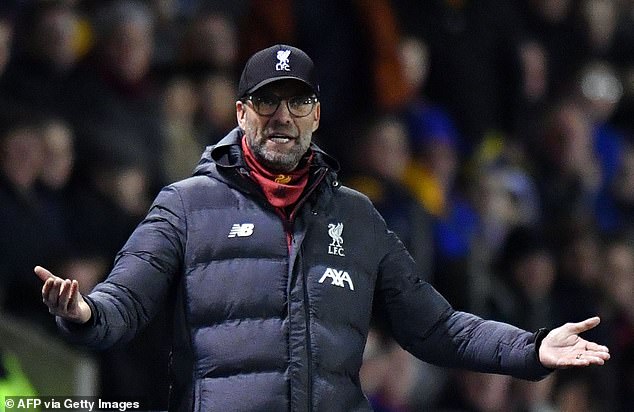 Jurgen Klopp made a stand over the Premier League’s winter break, saying his first team players will have their rest as opposed to playing against Shrewsbury in the FA Cup 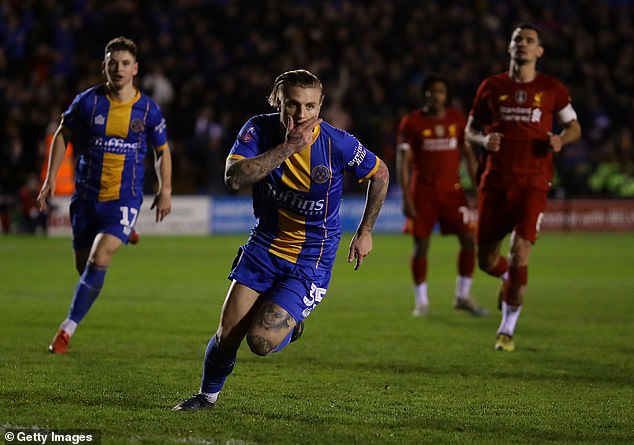 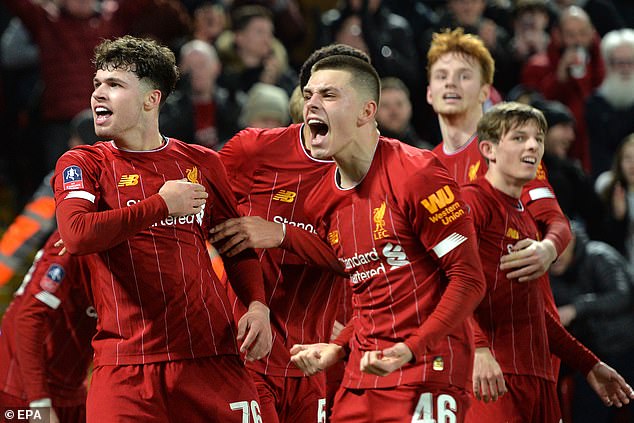 It’s also led to a dilemma for some clubs as to how to spend the time most effectively. While a handful have opted for warm weather training camps, others will simply be allowing their squads to go on a well-earned holiday.

And a combination of the FA Cup replays and the security situation in the Middle-East have forced some clubs to alter their plans.

Liverpool manager Jurgen Klopp, who has been calling for a winter break for several years, has finally got his wish and is determined to make the most of it.

And if that meant offending a few people for the sake of missing an FA Cup replay against League One Shrewsbury Town, then so be it.

Liverpool could only draw 2-2 with the Shrews in the first game but won Tuesday night’s replay 1-0 with a very young team to make the fifth round.

That date fell right in the middle of Liverpool’s scheduled winter break, which runs from Sunday 2 until Friday 14. 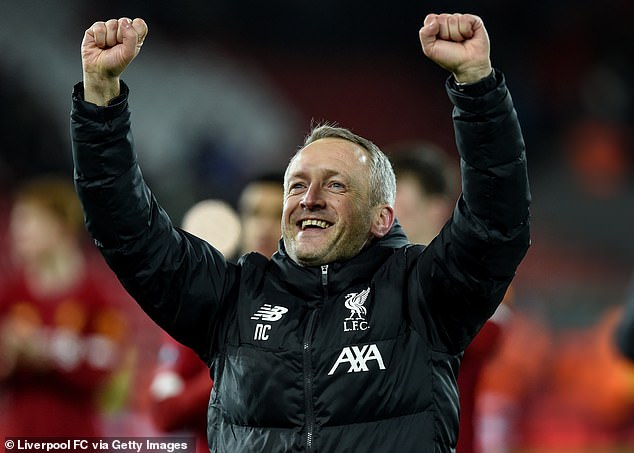 Neil Critchley, the Liverpool under-23 coach, took charge of the replay with Shrewsbury 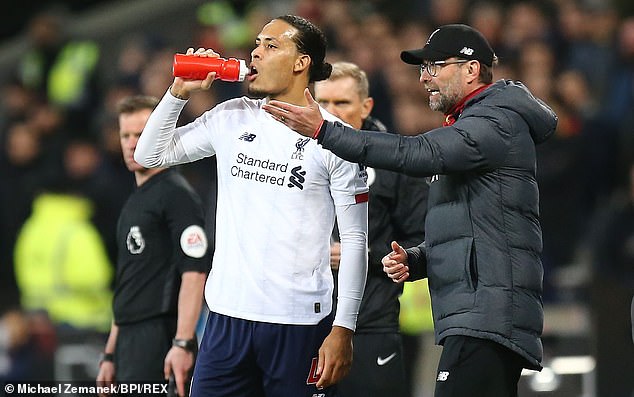 Klopp argued that his international players, such as Virgil van Dijk, need to have some rest

And Klopp has been unapologetic for fielding Liverpool’s under-23 team, coached by Neil Critchley, in the replay while his first-team squad enjoy the chance to recharge their batteries.

‘The Premier League asked us to respect the winter break,’ said Klopp. ‘That’s what we do. If the FA don’t respect that, then we cannot change it. We will not be there.

‘You have to respect the players’ welfare. They need a rest. They need a mental rest, a physical rest, and that’s what the winter break is all about.

‘Then another competition [the FA Cup] tells us that’s not so important so we had to make these decisions beforehand because these boys have families.’

With the European international players heading straight into Euro 2020 after the end of the season, the next fortnight will be their last change to rest up.

Klopp has taken a firm stand but other clubs now involved in FA Cup replays fielded first teams, cutting into the time off.

Newcastle United, Tottenham and Southampton have all played replays. 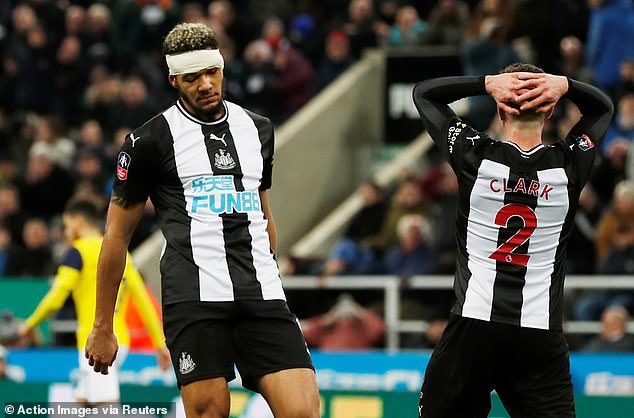 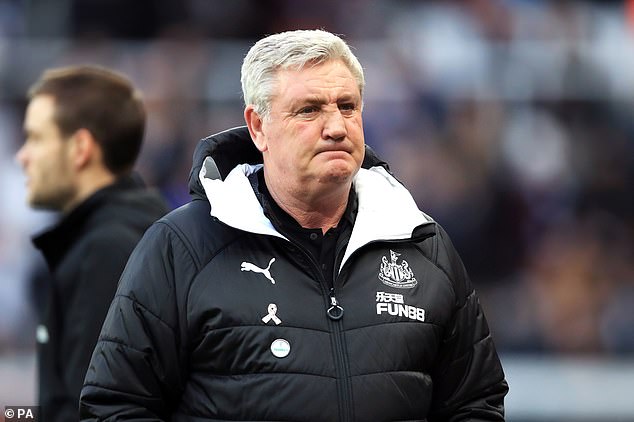 Steve Bruce, the Newcastle manager, had no plans to take his team away but said ‘they’re going to have a few days off and let their missus look after them.’

Now that all had to be cancelled because of Tuesday’s replay with Oxford United at the Kassam Stadium, which they won 3-2 in extra time.

Spurs manager Jose Mourinho was pretty calm about the extra game, saying ‘it means we are still alive in the competition and it is better than losing’.

But he has been critical of the fact Spurs have their time off during the first part of the staggered winter break, with their two league games just before their Champions League tie with RB Leipzig.

‘I’m not happy the break comes at the wrong moment – because the break should be before the Champions League,’ he said. 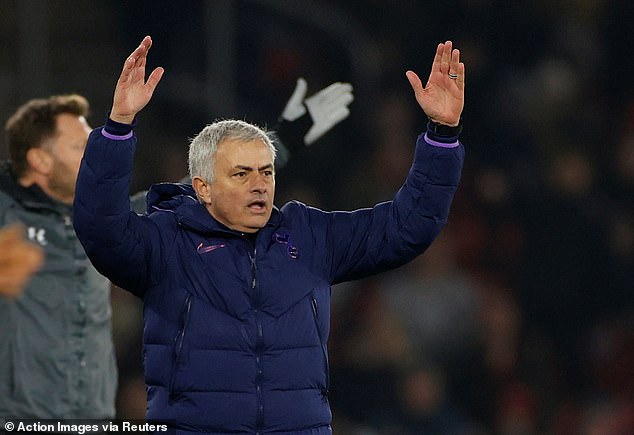 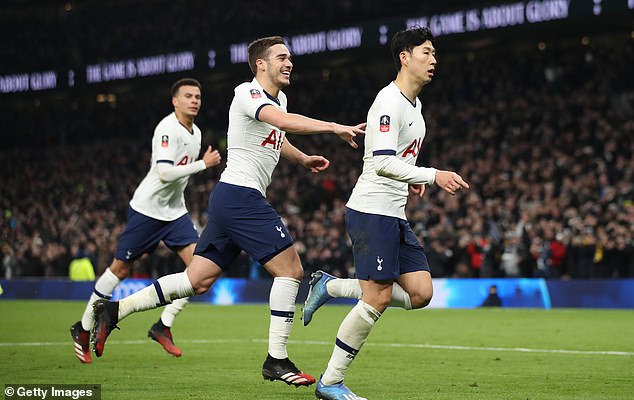 Southampton also had to cancel their plans for a mid-season break and manager Ralph Hassenhuttl wasn’t impressed prior to the replay against Spurs, a game his side lost 3-2 on Wednesday night.

‘Now we have a replay in our winter break and that doesn’t make sense for me,’ he said.

He said the fourth round tie with Spurs, which ended 1-1, deserved to have a winner on the day. Ironically, the fifth round, which has been moved to midweek to accommodate the winter break, doesn’t have replays.

The Premier League insist all clubs were pre-warned about the possibility of FA Cup replays cutting into the winter break at the start of the season.

Other clubs have been forced to tear up their winter break plans for different reasons.

Manchester United cancelled their plans to head to the Aspire Academy in Qatar after Middle-Eastern tensions flared following the assassination of the Iranian general Qasem Soleimani in a US airstrike earlier this month. 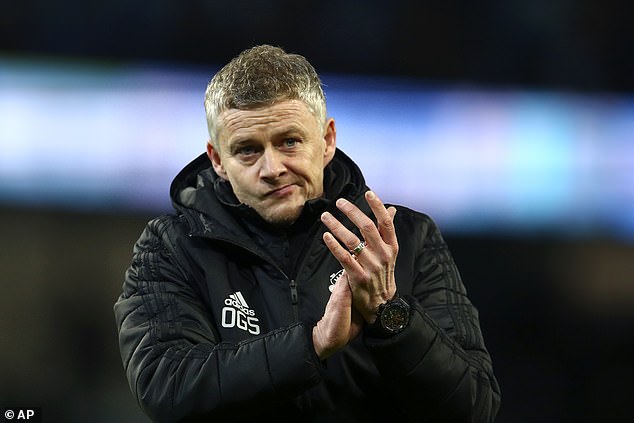 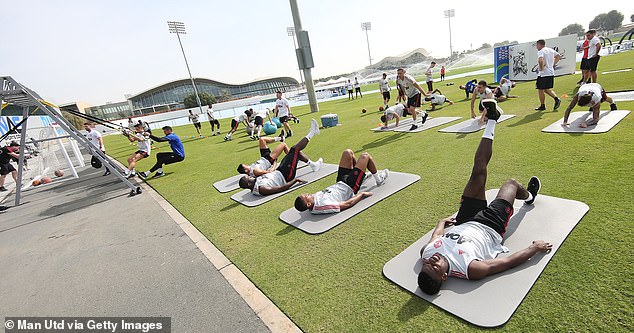 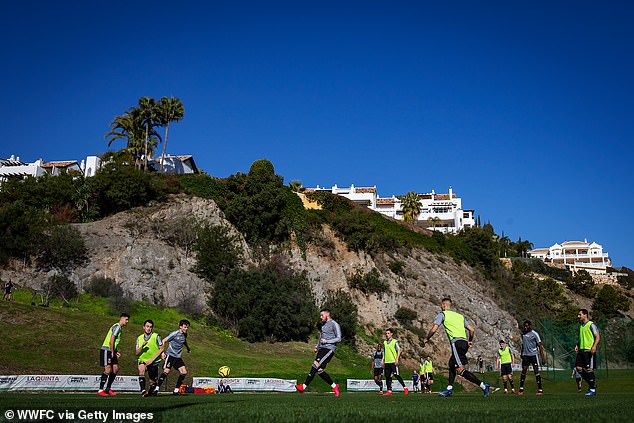 Manager Ole Gunnar Solskjaer will now take his squad to Marbella in Spain, arriving at the football camp there just as Wolves vacate.

Likewise, Brighton have cancelled their planned warm weather training camp in Dubai and will train at home.

The south coast club were worried about the American Express sponsorship on their shirts and the fact their owner, Tony Bloom, is Jewish.

The situation in that part of the world hasn’t deterred some clubs, however. Arsenal are set to visit Dubai between February 7 and 11.

‘Dubai is a fantastic place and the football facilities there are first class. It will do us good to experience a change of environment before we enter a crucial part of the season,’ said manager Mikel Arteta. 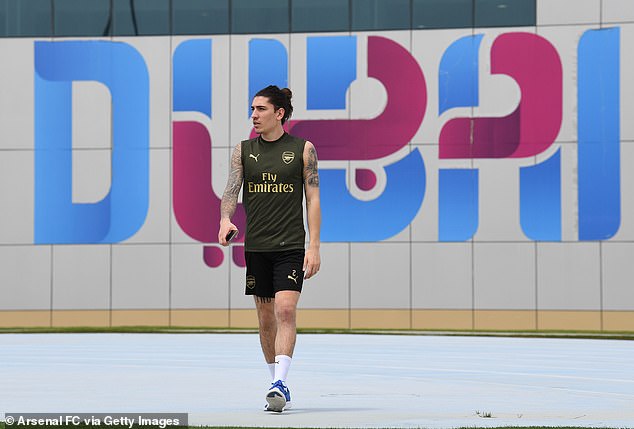 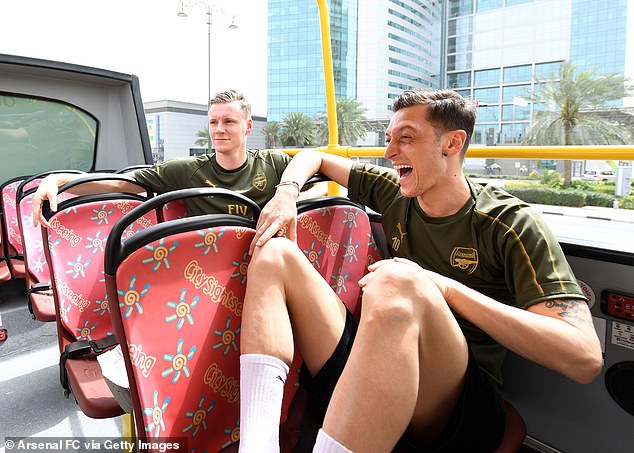 Likewise, Sheffield United will be jetting off to the Emirate following their home match against Bournemouth on February 9.

Other top-flight clubs have decided not to stage a training camp and will simply allow their players to go on holiday before training at home.

Liverpool and Manchester City will be doing so, with Pep Guardiola turning down the offer of a four-day training camp to let his players go wherever they like.

‘We’ll have a few days off and after that we’ll train again, three or four days and then plan for Madrid,’ Guardiola said.

‘We’ll train here. I thought about it (warm-weather training) but I want the guys to stay with their families and then come back. I’ve decided we’ll be here.’ 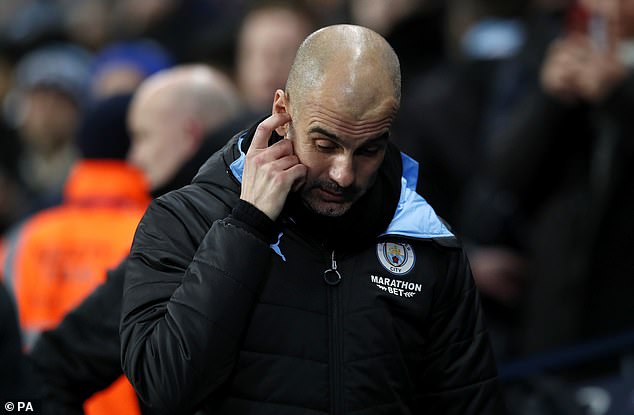 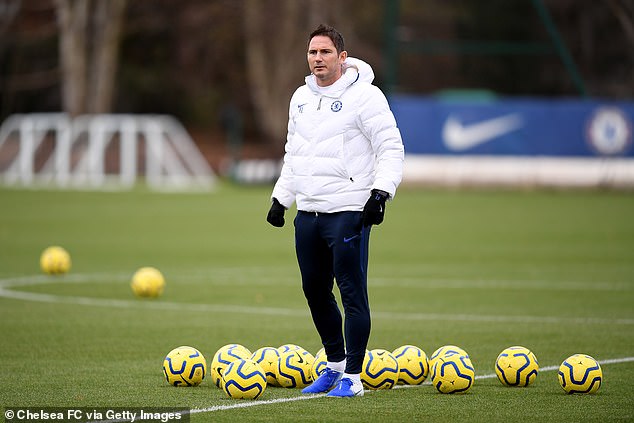 Chelsea boss Frank Lampard will follow a similar policy, handing his player free time early in their break before staging a ‘mini pre-season’ at their Cobham base.

Everton and Leicester City are set to do similar, with Toffees boss Carlo Ancelotti even planning mid-season friendlies.

So an idea designed to give players and coaches a much-needed rest has already proved a little chaotic and even controversial.

Whether they actually feel any benefit from the time off will only become apparent in the final weeks of the season.

Why has this winter break been introduced?

To try and address the perennial complaints of Premier League managers who must cope with mounting injury lists and fatigue following the hectic Christmas and New Year schedule.

The hope is that some time off during February will ease the burden and allow for fresher legs in the closing weeks of the season.

It’s also hoped the breather will benefit England manager Gareth Southgate at Euro 2020 but of course with the league being so cosmopolitan, quite a few nations would feel the same benefits.

How will it work?

A round of February fixtures has been split over two weekend to give clubs at least 13 days off.

It has been structured so eight of the 20 teams play one weekend and the other 12 the following weekend.

So it won’t be a complete shutdown as with other European leagues so fans don’t need to worry about being without top-flight football.

Will lower leagues get the same break?

No. The Football League will continue with a full schedule and at its usual relentless pace.

What’s the complication with the FA Cup?

Four Premier League sides are going to see their 13 days of winter break slashed because they need to play an FA Cup replay this week.

It’s an inconvenience but Premier League clubs were made aware at the beginning of the season that this was a possibility if they failed to win their fourth round ties.

Liverpool manager Jurgen Klopp has made a stand by saying he will field the kids against Shrewsbury at Anfield and won’t be on the touchline himself.

But the other three top-flight clubs will just have to take the hit.