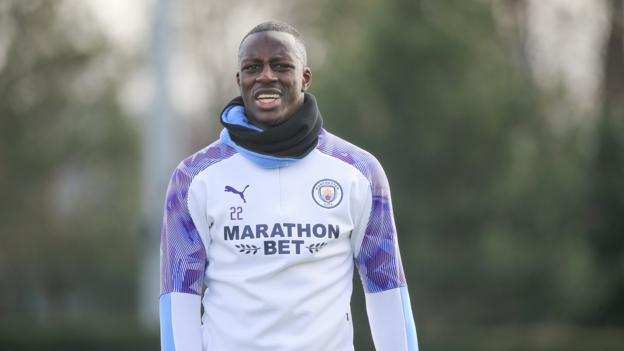 Manchester City defender Benjamin Mendy is self-isolating as a precaution after a member of his family was admitted to hospital displaying symptoms of coronavirus.

Mendy, 25, trained with his team-mates as normal on Thursday.

“The club is aware that a family member of a senior men’s team player is in hospital with symptoms of a respiratory illness,” said a City statement.

“He has undergone tests at hospital one of which is for Covid-19.”

The statement added: “Until the results are known, the player in question in self isolating as a precaution.”

City are scheduled to play Burnley in the Premier League at Etihad Stadium on Saturday (15:00 GMT).

Their league match against Arsenal on Wednesday and Champions League last-16 second leg against Real Madrid on 17 March have already been postponed due to coronavirus concerns.

The Foxes are due to play Watford at Vicarage Road in the Premier League on Saturday at 12:30 GMT.

Spain’s La Liga, the Dutch Eredivisie, Portugal’s Primeira Liga and USA’s Major League Soccer have all been suspended as authorities across Europe attempt to limit the spread of the virus.

European football’s governing body Uefa has called an emergency meeting for Tuesday to discuss its response to the outbreak.

The possibility of postponing Euro 2020 for a year to allow European leagues to complete their domestic seasons will be discussed.

The UK government said on Thursday that is considering banning sporting events amid the outbreak – but it will not happen immediately.

Prime Minister Boris Johnson said the UK will move to the second phase of its plan to tackle the virus, which aims at delaying its spread, rather than containing it.

It comes after the World Health Organization designated the outbreak of the disease a pandemic.

There have been 596 confirmed cases across the UK and 10 people have died.