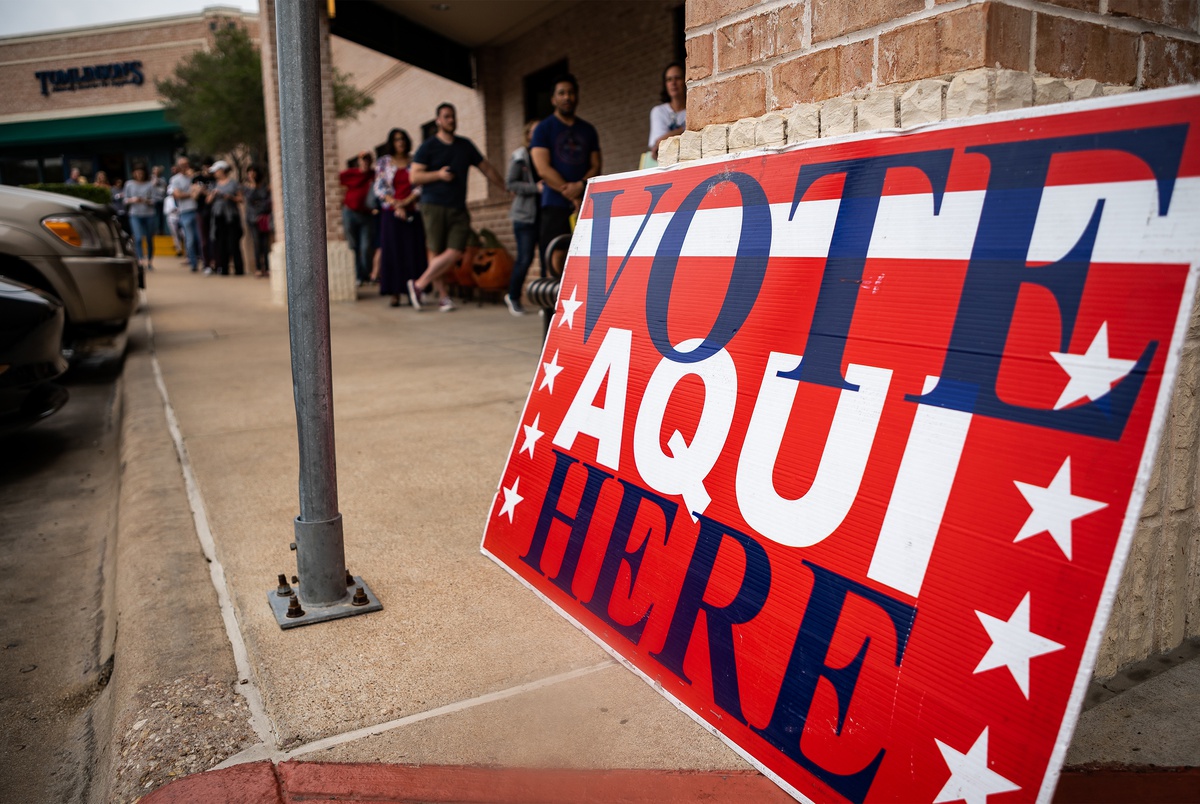 Excessively long lines to get into some polling places. Too few election workers checking people in, and too few voting machines to handle the turnout. Missed ballots.

If Super Tuesday is the only trial run the state gets for the November general election — and it is — the March 3 primary proved that some Texas election officials will have to learn some key lessons if they want to avoid a repeat of the problems that erupted across the state.

The issues that plagued primary voting, particularly in the counties home to the most voters, were largely not related to technology, but instead were a compendium of human errors. The miscalculations came mostly at the hands of local election officials, in part as they tried to adapt to a broader statewide effort to modernize elections and usher in new voting systems that were supposed to make voting easier.

Some of the problems will be smoothed out as Texas shifts from primary elections — in which Republican and Democratic voters were split apart in some parts of the state — to a general election. But officials are now taking stock and figuring out how to fix what went wrong ahead of a general election predicted to bring out more voters than ever before.

“It feels a little bit like [2001],” said Collin County elections administrator Bruce Sherbet, referring to the period after the 2000 presidential election and the broad electoral reforms ushered in after that year’s counting crisis. “I think it is comparable in the sense that there was a sense of urgency, and the sense of urgency was coming into this presidential election and the urgency was trying to get one under the belt before November.”

For those who run elections, the primaries were an important marker, offering county officials the only opportunity to test out new election systems with the sort of voter traffic that last year’s constitutional amendment election lacked.

Most big counties were running their first high turnout elections under a voting model that allows residents to cast a vote at any polling place in their county on election day instead of limiting them to the precincts in which they’re registered. And while they had historical early voting data to turn to, primary day voting under the countywide system made clear that some key adjustments need to be made.

In Bexar County — where 39.6% of election day voters in the constitutional election voted outside of their precinct — voting sites with the same amount of equipment saw wildly disparate foot traffic that will likely prompt the county to shift resources or pursue larger venues to accommodate more equipment in November.

“We still have some sites that are at 500 and some that are at 50 so we’re going to have to really look at that to manage that,” Jacque Callenen, the Bexar County election administrator, said at an election day press conference.

The mismatch in voting equipment to voters proved to be one of the most significant issues on election day. Harris County, where some voters were forced to wait more than six hours to cast their ballots, saw the worst of it. But the long lines were also felt in other population centers like Dallas, Tarrant, Travis and Hays counties.

Some of those issues were rooted in the nature of primary elections for which political parties essentially contract with county officials. While the counties administer the elections, it’s the parties that get to choose the set up for election day. In some counties that meant separate lines and voting machines for Republicans and Democrats.

An ill-conceived effort to offer equal machines to each party in Harris County was partly responsible for the astonishing wait times there. Tarrant County saw a similar lopsided effect after giving Republican voters more machines. That won’t be an issue in November when voters will be able to share all of the equipment. And Diane Trautman, the Harris county clerk, has already indicated she’ll be looking to expand her fleet of machines. The stock will likely come from other Texas counties that have since ditched the older machines Harris is still using.

But the pace at which voting moved in polling places across the state was also muddled by insufficient staffing. Some polling sites only had one electronic pollbook to check voters in, resulting in a bottleneck that meant voting sites weren’t always running at full capacity.

At Texas State University, where the line of students waiting to vote grew longer as the night went on, voting dragged on until 11 p.m., in part, because only one voter could be checked in at a time.

Combined with an unexpected jump in turnout, this caused a “breakdown,” particularly when there were also issues with a prospective voter’s registration, said state Rep. Erin Zwiener whose district includes the university and whose staff tracked similar problems at other polling sites in the county.

The Driftwood Democrat said she’s planning to sit down with county election officials, who did not respond to a request for comment, in the months ahead to avoid similar slowdowns in November.

“I don’t see any malice in what happened,” said Zwiener. “I do see a sort of earnest underestimation that we have to make sure we address.”

It’s an underestimation that counties with several years experience running elections under the countywide model have simply had more time to work through. In Williamson County, for example, officials strive to set up polling sites with at least two pollbooks, sometimes adding a third for “triage” when issues arise with a voter’s registration.

The electoral issues the state faced on Super Tuesday also extended into the actual tallying of votes.

The morning after the election, the state’s results page noted that election night reporting was complete except for in one small county, but the state’s tally of votes was actually missing more than 100,000 votes out of Harris County alone. By that afternoon, it was still off by tens of thousands of votes.

That day, Keith Ingram, director of elections for the state, said the secretary of state’s office was “trying to work through discrepancies” with the counties as issues were reported to them.

“That’s what we do every time the day after an election,” Ingram said at the time. He pointed out that county officials are responsible for manually entering their election returns into the state’s centralized reporting portal.

But officials in Harris County reported they had faced issues Tuesday night in trying to report their results to the state because the secretary of state’s website continuously timed out before they could hit submit, likely because of how long it took them to get through the county’s lengthy ballot. The county reported some of their election night numbers by phone but couldn’t fully submit until the next day.

And then there was Dallas County where election officials fumbled the rollout of new voting equipment by failing to count an unknown number of votes.

Like other large counties, Dallas was introducing its voters to a new election setup that allows voters to fill out their ballots on touch screen machines that then print a paper ballot that’s scanned and tabulated by a different machine. The votes were supposed to be pulled off flash drives from those tabulating machines, but the county missed 44 flash drives in its initial count.

The mishap prompted a recount and calls for a review of how counting went so wrong.

All in all, the problems that voting in Texas was mired in on Super Tuesday have triggered serious concerns among election experts and voting rights advocates — some of whom described the primary election as a “meltdown.”

Though just a quarter of Texas’ 16.2 million registered voters participated in the primary, more than 8 million voters are predicted to head to the polls in November. Election officials are already facing pressure from state lawmakers and civil rights lawyers who are pressing state and local election officials for answers.

“You want to make things better, but in the short run you’re going to have problems — even if in the long run systems like [countywide voting] and new voting machines are going to be better,” said Rick Hasen, an elections lawyer and professor at the University of California-Irvine.

But that makes it paramount for election officials in Texas to resolve and get out ahead of the issues voters experienced last week to restore a sense of trust in the system, Hasen said.

“Even when there’s a problem due to incompetence, many people will believe it was intentional,” Hasen said. The way the primary went in Texas “further undermines people’s confidence.”

Disclosure: Texas State University and the Texas secretary of state’s office have been financial supporters of The Texas Tribune, a nonprofit, nonpartisan news organization that is funded in part by donations from members, foundations and corporate sponsors. Financial supporters play no role in the Tribune’s journalism. Find a complete list of them here.