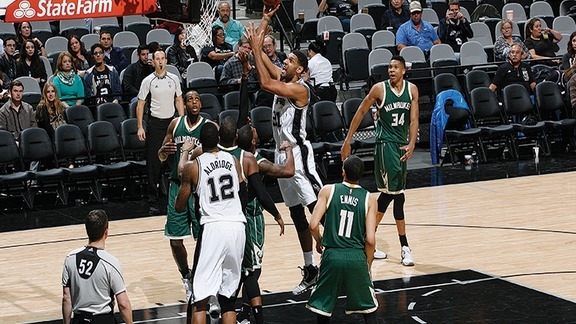 AT&T CENTER – “Team defense was very good. LaMarcus (Aldridge) and Tim (Duncan) were really good under the bucket, and LaMarcus had five blocks,” said San Antonio Spurs Head Coach Gregg Popovich Wednesday, after his team held the Milwaukee Bucks to 70 total points, in a 25-point blowout win for San Antonio. “When he (Aldridge) does that that makes it really tough for teams to score down there. So it helped us get going, and we found a little bit of offense here and there,” continued Popovich on Aldridge’s defense and the Spurs as a team. Zooming in on that stat, Aldridge’s five blocks, it was a season-high for Aldridge in blocks in a game through 17 games with San Antonio. With Portland, Aldridge’s former team, Aldridge totaled seven 5-block games during his nine seasons with the Blazers. Aldridge’s career high for blocks in a regular season game is seven, set back in the 2011 season……….Read More