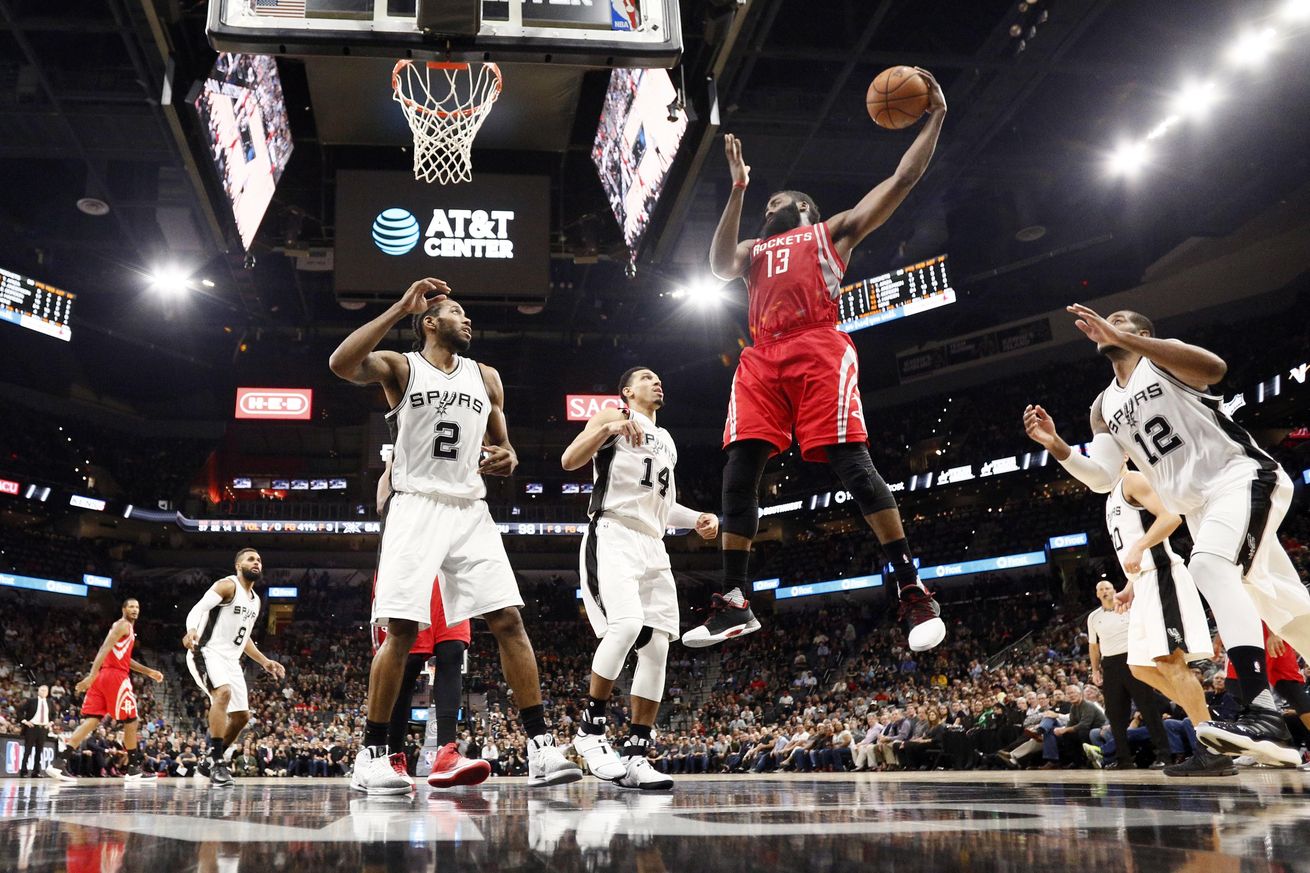 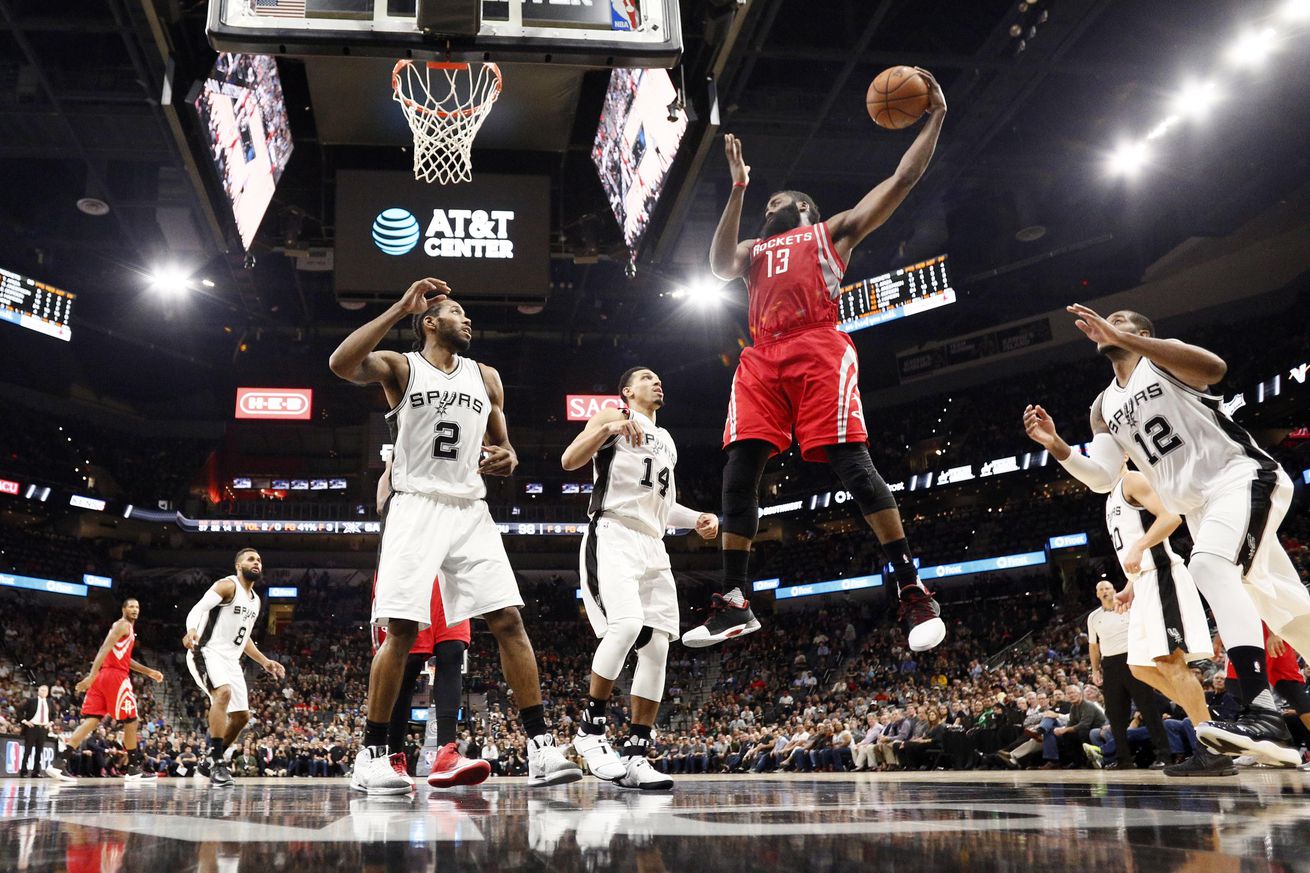 The PtR staff gives out end-of-year awards and discusses what it will take for the Spurs to suffer another early playoff exit.

1) If the Spurs don’t make the Western Conference Finals it will be because of ______.

Michael Erler: Lack of backcourt scoring. Teams will do their darnedest to get the ball out of Kawhi Leonard’s huge mitts, which means he’ll have to be a facilitator. If Danny Green, Tony Parker, Patty Mills and Manu Ginobili don’t chip in with 40-50 points a night they’ll be hard-pressed to win.

Jesus Gomez: Their lack of quality depth. It’s one thing to be regular season deep. The Spurs have that covered, with guys like Jonathon Simmons, Kyle Anderson and David Lee sopping up minutes without hurting the team. In the playoffs, however, you need a few proven contributors to form a great core. The Spurs don’t have that. They only have one backup wing who can shoot, who happens to be 39-year-old. Other veterans Pau Gasol and Tony Parker can only contribute in certain matchups. They have a few specialist but no real versatility. That could make their run shorter than expected.

Chris Itz: Sure, backcourt scoring and depth will be an issue but this team will go as far as Kawhi takes them. He’ll have to be at his absolute best, as a defender, as a scorer and especially as a playmaker with the doubles coming. If he’s merely great and not otherworldly the Spurs may not be playing come late May.

Bruno Passos: They lose the battle in the paint. The margin for error narrows tremendously against Golden State, obviously, but in the first two rounds — against teams like Memphis and Houston — I think the series can swing if they don’t account for the opposing hustlers and rim runners.

Taylor Young: No second fiddle. As the Spurs advance, they’ll have more teams adopting the anyone but Kawhi strategy. If a number two scorer can’t make opposition consistently pay they won’t be long for the postseason world.

Michael Erler: Ironically, for a team ranked second in defense, there are no great answers here. Leonard, burdened by his heavy workload on offense, is having a down year by his lofty standards in his own end. Both by traditional defensive rating and real-adjusted plus-minus he’s been ordinary, and teams largely run their stuff away from him these days.

Danny Green generally draws tougher assignments, but while he’s one of the best in the league, he’s also inconsistent and always on a short leash.

Dewayne Dedmon has been a revelation, but he only plays 17 minutes a night. He’s my pick for the award, but I don’t feel good about it. It’s probably Leonard and I’m overthinking this.

Sixth-man is Patty Mills. It would be Pau Gasol if he did it the whole year, not just for the Spurs but he’d actually win the award. He’s been fantastic off the bench.

Most improved is Leonard, for the fifth consecutive season.

Jesus Gomez: The DPoY goes to Kawhi, in my eyes. Yes, he hasn’t been as dominant on that end as in past years and yes, Dewayne Dedmon has been a revelation on that end. But the big fella only plays 17 minutes a game and Kawhi is still the best perimeter defender in the league. For Most Improved, my vote also goes to Leonard, by default. Veterans don’t tend to improve — though Pau deserves some recognition for his three-point shooting — and the breakout we were hoping for from the young guys never came. And for Sixth Man of the Year, I’m going with Manu Ginobili because I get to be irrational too sometimes and give imaginary awards to my favorite player of all time.

Chris Itz: Umm, I don’t see how there’s an argument that it’s not Kawhi for Spurs DPoY. Come on, that’s just silly. Kawhi also gets Most Improved — his usage jumped from 26% to 31% while his PER rose a point and a half, his true-shooting percentage stayed at 61% and his free throw rate jumped from 30.6% to 41.8%. It’s not close. By default it’s Patty Mills as sixth-man. He played the most games on the team and the most minutes off of the bench while being pretty good all season.

Bruno Passos: As great as Kawhi is individually, LaMarcus may have been more important to the team’s overall defense this season. He’s got one of the league’s best defensive field-goal percentages around the basket (just behind Rudy Gobert and Draymond Green) and has developed into a real anchor for the team.

Sixth man would be Pau. I don’t think he’d have the bench/starter split to qualify technically, but the role has suited him so well and it’s come with a transformation in his game that has been fascinating to watch. The fact that he’s so willingly made the move to the bench after being a lifelong starter should be praised in and of itself.

Taylor Young: Defensive player of the year in my eyes is Danny Green. He’s consistently shouldered more of the load when guarding opponent’s wings and taken pressure of Kawhi. Most improved player of the year has to be Kawhi Leonard. Sixth man of the year since the all star break—sharp shootin’ gunslingin’ Pau Gasol.

3) Despite his good showing against the Jazz and Grizzlies, the season has pointed to Tony Parker’s demise. How do the Spurs improve at the point guard position next year while keeping Tony on the team?

Michael Erler: Re-sign Patty Mills and play him 32 minutes a night. Or promote Dejounte Murray to starter and play him 36 minutes a night. There are realistically no scenarios where the Spurs A) lose Mills in free agency and/or B) keep starting Parker that’s going to make them improve at point guard next season. On some level you’d think they understand this.

Jesus Gomez: They don’t. They just ride out his contract without adding long-term salary. They could keep Patty by offering him something in the ball park of a four-year, $60 million deal, but he’s about to be 29 years old and is better suited as a backup. I doubt he gives them a discount, since he was headed for a raise before a rotator cuff injury cost him big money last time he hit free agency and this is the last chance at a big paycheck. it might be best to just ride out next season with Tony, a veteran backup and Murray and waiting for 2018, when Parker’s contract ends, to truly move on from him as a starter. They will have more cap space to make a real upgrade then.

Chris Itz: Let Mills walk, they can’t afford him and keep their options open in 2018, and then throw Murray into the fire and hope it goes well. I don’t see any other options.

Bruno Passos: There are going to be affordable point guards out there, so it’ll just be about surveying the market and finding the right guy on a friendly contract as a stop-gap. As much as I love Patty in all his towel-waving, dagger-hitting, unconventional-layup-taking glory, that price tag is going to be too high for me for a guy that still seems to struggle in standard pick-and-roll situations.

Taylor Young: Try to convince Tony to retire? Then throw a 2-3 year deal at George Hill so he can start until Murray’s ready for the reigns and a big contract.

4) If the Cleveland Cavaliers aren’t the Eastern Conference representative, who will make it to Finals instead?

Michael Erler: If Kyle Lowry comes back 100 percent then the Raptors. They’ve got a complete starting five and the deepest bench. If he doesn’t then Washington, who’ve got the best starting five. Milwaukee is intriguing with the combo of Giannis Antetokounmpo and Khris Middleton, two awesome two-way players, but they’re too inexperienced.

Jesus Gomez: The Raptors’ defense has been impressive since the Ibaka trade. They have more playoffs experience and are better at handling adversity now. If Lowry returns and is his normal self, that’s the only team I can see catching fire at the right time and beating Cleveland, if everything goes their way.

Chris Itz: Sure, I’ll go Toronto as well. I’d like to say Boston, they’ve had the best net-rating in the East in 2017, but they’re lack of playoff experience is an issue.

Bruno Passos: Give me the Raptors. I love all their midseason moves, and they’ve got the combination of experience, depth and scoring that can help them go deep in what seems to be a wide-open Eastern Conference.

Taylor Young: Two months ago I would have said the Wizards, because I like their starting five, but they can’t stop anyone. I will go with the Raptors, but I don’t think anyone has a chance.

5) What was your favorite reveal that came out of Tim Duncan’s Podcast with Richard Jefferson and Channing Frye?

Michael Erler: I don’t know if it was a reveal, bit my favorite story was Richard Jefferson sharing an anecdote about Pop loudly and profoundly lamenting on the bench to Jefferson about how terrible Gary Neal was and how he hated having no choice to play him because Jefferson was the only alternative, and then Jefferson said he finally told Neal one day what Pop was saying about him and Neal casually replied “oh he tells me the same stuff about you when you’re in there.”

Jesus Gomez: The fact that Timmy genuinely likes Richard Jefferson is the biggest reveal to me. It makes sense. RJ and Tim played together with the national team, so they knew each other before Jefferson joined the Spurs. They then spent a couple of years as teammates. But it was strange to see the personification of what fans consider everything good about the Spurs having a great time hanging out with one of the most hated players in the franchise’s recent history.

Chris Itz: That Popovich basically hated RJ. The first question about whether Pop disliked Trump or RJ says it all. I honestly didn’t expect that, he always seemed like a pro to me.

Bruno Passos: Any mention of Pop between the two was gold. Gold, Jerry.

Taylor Young: I never realized Tim was such an outdoorsman. That dude has so many hobbies. Basketball, cars, video games, tattoos, comic books, fishing and hunting. No wonder he wanted to retire.