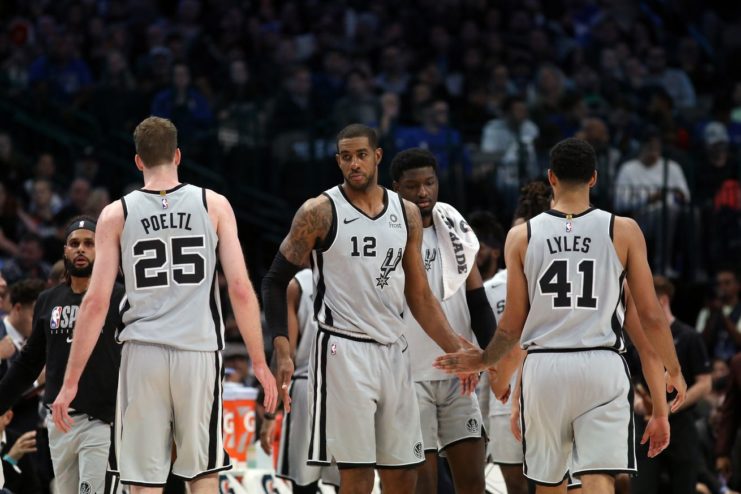 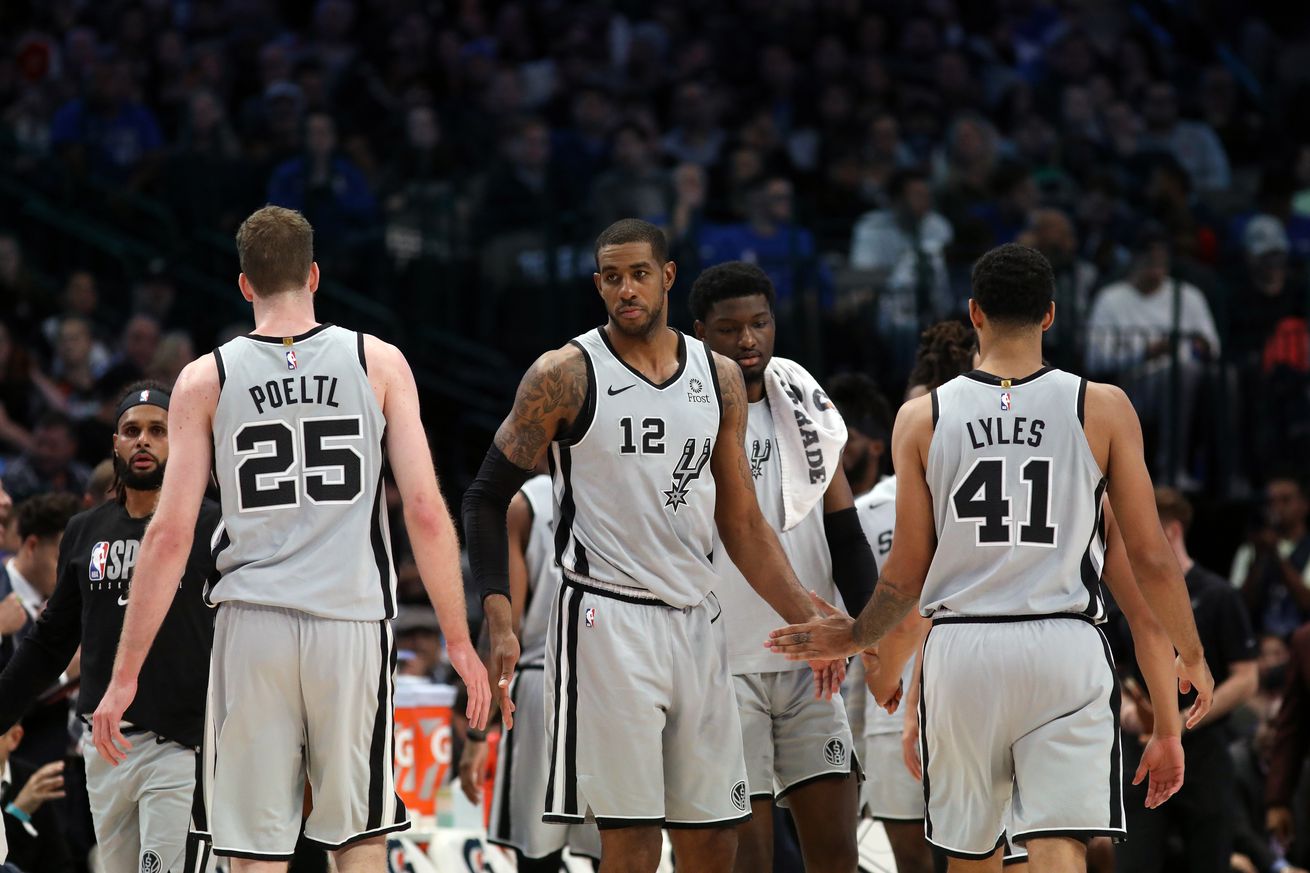 The eye test says that Murray, Forbes, DeRozan, Lyles and Aldridge isn’t working. So, what change to make?

The Spurs’ starters dug the team into another deep hole in their Monday night loss to the Mavericks. That they nearly dragged themselves out of that hole is both another sign that there’s more to this team than their 5-9 record would suggest, and a clear indication that the five man grouping that has started all but 2 games is not working.

Last night, the starting group was outscored 24-8 in 8 minutes of action, which, while extreme, is essentially what has happened every time they’ve been on the floor. The five man lineup of Dejounte Murray, Bryn Forbes, DeMar DeRozan, Trey Lyles and LaMarcus Aldridge has played 312 possessions together, per Cleaning the Glass (CTG), and gotten shellacked pretty much the whole time. Their net rating together is -11.3, and that might even undersell just how bad they’ve been together.

Both teams have had all 5 of their starters on the floor for 122 minutes of action in Spurs’ games so far this year, and the Silver and Black have scored 100.4 points per 100 possessions in that time while giving up 116.1 points per 100. That’s a starter vs. starter net rating of -15.7, which is good for the 3rd worst in the league, behind the Wizards and Hornets and just ahead of the Warriors.

At this point, we’re still just talking about a couple hundred possessions, so it’s important to note that even one extra made three pointer on either side is enough to swing the net rating by more than a point. But when you’re sitting at a -15.7 after almost 250 possessions, it’s fair to say you’re bad even though you may be a little in off in measuring just exactly how bad you are.

More important than the precise measurement, though, is understanding what about the starting lineup isn’t working, and finding viable solutions that will help the team avoid these horrendous starts.

In half court offense, this group makes the floor far too small for the defense. The most frequent critique of this team, that they don’t shoot threes, is largely irrelevant for the team as a whole. They have the 8th best offense in the league, per CTG, and while it could certainly be better, the number of threes they take as a team isn’t particularly relevant to why they’ve been losing. But for this group in particular, the lack of space is easily attributable to having only one real shooter on the floor.

There are other ways to provide space, of course, with ball and player movement easily able to do the same work. But this group doesn’t have that either. They are largely stagnant, standing and watching as one or two players work to create an advantage, which makes them incredibly easy to defend. Making matters worse, their one shooter, Bryn Forbes, can’t get his own shot. He can come off a screen into a contested pull up jumper, sure, but he’s not going to dribble into a step back three against a good defender, nor break someone down on his own and get to the rim.

As a group, their offense is composed of a bunch of shots that represent the worst outcome for any individual possession, with almost none of the easy cuts to the rim or open threes that make up the best outcomes.

Against the Mavericks, the Spurs opened up with three straight small/small screening actions. On the 1st two, Dejounte screened for DeMar at the top of the key while the rest of the team stood at the three point line. DeMar drove and drew a shooting foul on Luka Doncic on the first, but the second quickly devolved into a disorganized mess.

No more than two Mavericks are ever actively defending anything at once. Watch it five times and take turns watching each individual defender. How are often are any of them forced to make a choice? How often do any of the Spurs have a choice, for that matter?

The play starts with obvious confusion, as DeMar is waiting for Dejounte to come set a screen while Dejounte runs to the arc. Dejounte ducks down into the paint to run up for the screen but DeMar doesn’t wait for him, forcing Dejounte to get out of the way to avoid getting called for an illegal screen. The Mavs easily double team DeMar, but his pass to Dejounte is a little off the mark, giving Doncic plenty of time to recover into position.

Doncic easily absords Dejounte’s straight-line drive, so he picks up his dribble and kicks it out to LaMarcus, who does his own version of the 2-3 dribble drive that goes nowhere before swinging it to Bryn on the left wing with just 5 seconds left on the shot clock. Bryn dribbles over the screen and pulls up for the contested 21 footer, which clanks off the left side of the rim.

There’s simply nothing else to call that but bad offense. The next time down the floor, they switched it up by having DeMar screen for Dejounte on the left wing.

Dejounte manages to create some space for a drive and gets all the way to the restricted circle, but you can see how comfortable the Mavs are with Doncic guarding him one on one. No help comes and Trey’s the only one moving on the perimeter, so there’s no good option for kicking the ball out. Dejounte gets a decent attempt off, but leaves it short.

With this lineup on the floor, the Spurs’ offense typically consists of a single action, whether pick and roll or postup, with everybody else standing around. Sometimes they make it work well enough to find a good shot, like on Dejounte’s drive and kick with 7:20 to go in the quarter, though Trey bricked the open corner three.

That’s some great ball handling by Dejounte, which is a good reminder that while this lineup is bad at the moment, there’s a good chance that it will look a lot different as the team’s young point guard continues to grow.

The difference in the team’s offense once the reserves come in continues to be night and day. On their very first possession after subbing in Patty Mills, Derrick White, Marco Belinelli and Rudy Gay, the Spurs did this.

All those offensive issues wouldn’t be such a big deal if, like the starting lineup at the end of last season, this group was stout defensively, but that’s not the case. They actually attack pretty well in transition and early offense, but rarely generate the stops they need to get out and run. With two weak defenders on the wings, the team needs a lot more rim protection than they’re getting from Trey and LaMarcus. It’s easy to find examples of break downs that would be fixed by better effort and better communication, but at this point, there’s little evidence that either is inbound anytime in the near future.

The Spurs have to make a change. Fortunately, there are three different small adjustments that could each turn things around. The first and most obvious is to replace Dejounte with Derrick in the starting lineup. Dejounte may be the team’s future, but he doesn’t fit very well with its present. That lineup has been much, much better on offense.

With Derrick at the point, Bryn, DeMar, Trey and LaMarcus have scored 119.7 points per 100 — on only 127 possessions, so, grain of salt and all that. It’s true that they’ve given up 125.4 points per 100, but there’s good reason to expect that number will come down. Opponents likely won’t continue to hit 50% of their above the break threes against that 5 man group, for instance. More importantly, going back to last season, the 4 man group of Derrick, Bryn, DeMar and LaMarcus was a +7.1 in 1250 possessions, easily enough to warrant some time with Trey this year.

If the team isn’t willing to move Dejounte to the bench, then they should take a hard look at starting Jakob Poeltl instead of Trey, They’ve come out of halftime in each of the last two games with that lineup and done very well in both cases. There are obviously reasons for concern in that Jakob is a much worse shooter than Trey, but as mentioned before, there are others ways to space the floor, and as I’ve pointed out before that group appears to work.

Lastly, on an even smaller sample, it’s clear DeMarre Carroll can play. He was excellent down the stretch defending Kristaps Porzingis and is a willing and able shooter. It would mean going smaller than ever, but replacing Trey with DeMarre in the starting lineup might be the best solution of all.

Whatever the Spurs choose to do, it’s clear the current starting lineup isn’t working and something needs to change. Whether that involves Derrick, Jakob, DeMarre or some other option, any change would be good at this point, because continuing to run the same 5 man unit out for the tip every night is tantamount to tanking.