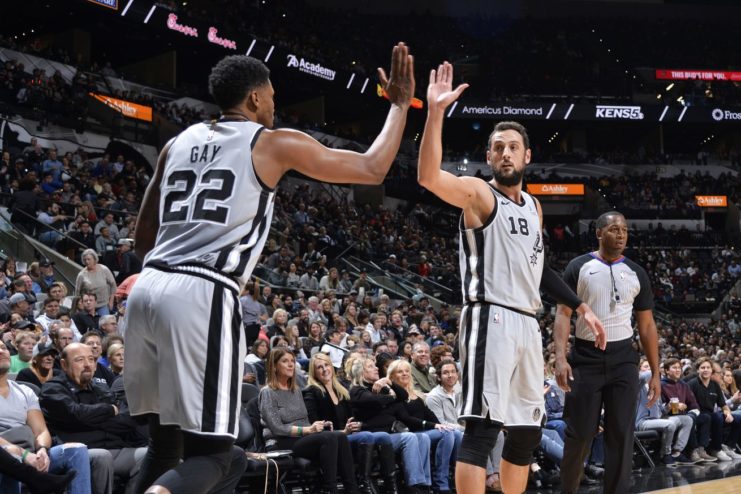 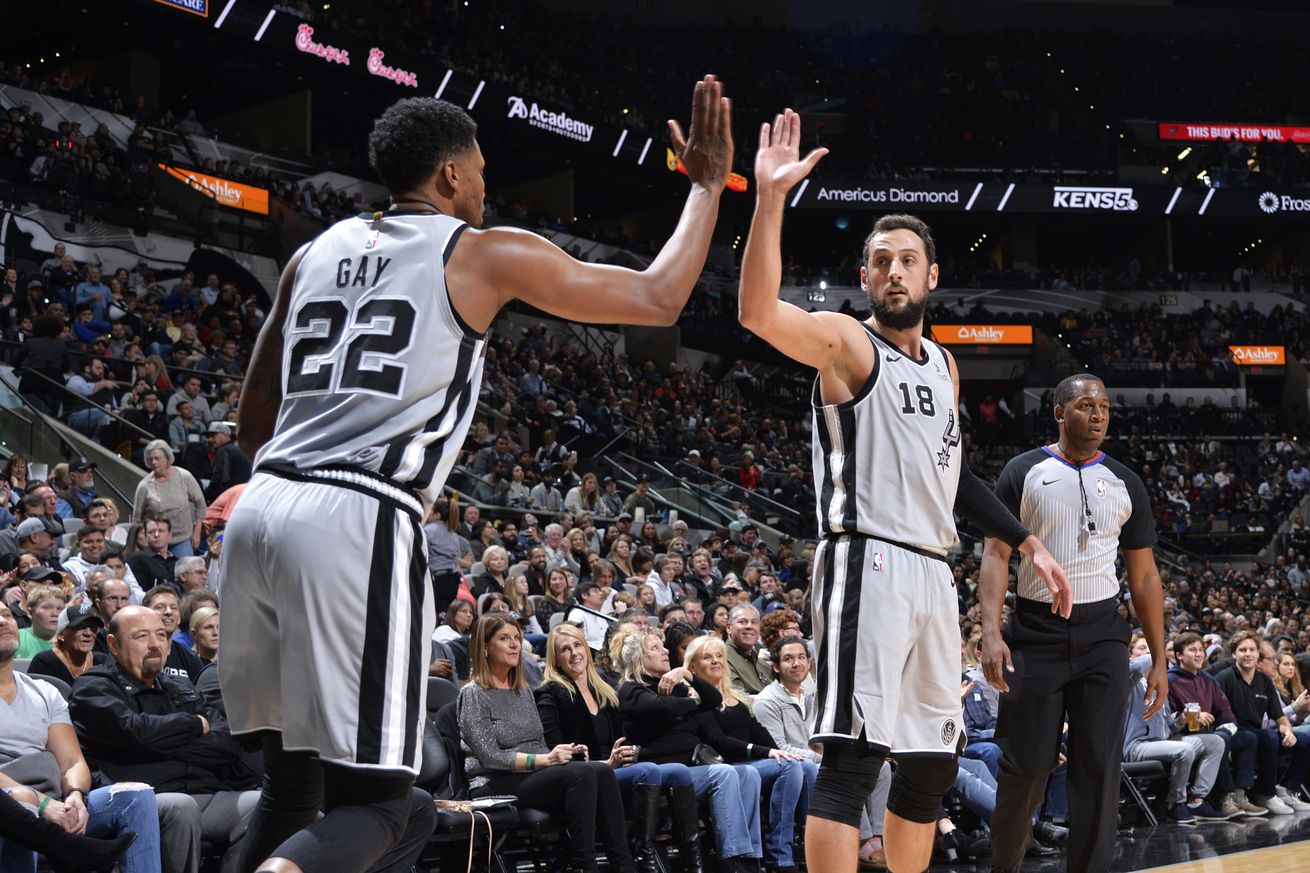 Three of last season’s shooters are in a serious slump. Can they recover and save the season?

After leading the league in three point accuracy last season, the Spurs have plummeted to 17th this year, hitting a paltry 35.3% of their attempts from deep. For a team that takes the fewest threes in the NBA, that level of futility from behind the arc is debilitating. With an average offense and no defense to speak of for most of the season, the Spurs sit at 12th place in the West with an 8-14 record, despite winning 2 of their last 3 games.

The team’s three point shooting drop off is almost entirely responsible for their offensive decline. After finishing 5th in 2018-19, the Spurs have fallen to 13th in the league so far this season. There simply hasn’t been any other dramatic change in their shot profile. They’re taking shots in the same places and making them at basically the same rate at the rim and in the midrange. But after shooting 46.1% on corner threes and 38.3% on above the break threes last season, this year’s Spurs are hitting just 38.8% and 34.7% this season, respectively, per Cleaning the Glass.

The loss of Davis Bertans obviously continues to hurt, but there’s more going on here than just the absence of one Latvian sharpshooter (no matter how wonderful he is).

The most obvious place to look is how well defended the shots are, and as it turns out, the Spurs have seen a subtle shift in the openness of their 3PAs. After taking wide open threes on 14.1% of their shot attempts last season, the Spurs are finding those looks on just 12.1% of their attempts this season. At the same time, the percentage of their shots that are threes with a defender within 6 feet has increased by about the same amount.

The change is significant, but the impact isn’t all that dramatic. If the Spurs were shooting just as well on each of those particular types of attempts this year, that overall degradation to shot quality would knock their team three point accuracy down about a third of a percentage point. That’s not nothing, but it’s pretty close.

Similarly, the team has seen a small change in shot location. They’re shooting a little less than 1 fewer three per game from the corners and a little more than 1 more three per game from above the break. Using last year’s shooting percentages, that adjustment would cost the team about another third of a percentage point. Once again, not nothing, but nowhere near enough to explain the team’s precipitous drop in three point accuracy.

There hasn’t been much of a change in type of shot, either. The Spurs took catch-and-shoot threes on 21% of their attempts last season and pull-up threes on 7.4%. This year, catch-and-shoot looks are up to 21.4% and, pull-ups are down to 6.9%: a change that should actually have a small positive impact on team-wide accuracy.

Trey and Rudy aren’t nearly the marksman that Davis is, so a drop off is expected, but nothing like what the team has actually experienced. Trey has managed to hold up his end of the deal, hitting 39.1% of his threes, but Rudy is slumping. He’s hitting just 27.1% from deep, including a mind-numbing 13.3% (4/30) on wide open threes, which is the 2nd worst in the league among players with at least 20 attempts.

One slumping shooter is bad enough, but Rudy isn’t alone. Marco Belinelli is off to a rough start to the season, too. If we open the aperture on that filter a little and look at players with 15 or more wide open three point attempts, Marco’s got the 3rd worst percentage in the league, just a pair of makes better than Boston’s Grant Williams and his wrong-kind-of-perfect 0 for 18.

Rudy and Marco have combined to hit 6 of 48 wide open threes. That’s a stunning bit of bad luck and ineptitude that is slowly strangling the team’s offensive efficiency. Hypotheticals like this are problematic for a lot of reasons, but I can’t help myself here. If Rudy and Marco were just hitting at a league average rate from three (35.6%) on their wide open attempts, the Spurs would be scoring over a point more per contest. That would easily bump their offense back up into the top 10.

And that’s without discussing what’s happened to Bryn. After knocking down nearly 43% of his threes last year, he’s fallen to 36.5% so far this season, and that’s including his magnificent 5 out of 6 performance in the team’s double overtime victory over the Rockets on Tuesday night. Before that, he was shooting below league average from deep. As mentioned, his attempts are up, so it’s reasonable to expect a slight decrease, but the downgrade from Steph Curry-lite to short Garrett Temple is a bit much to grapple with.

Unlike the team as a whole, Bryn has seen a dramatic shift in how well his shots are defended. After taking wide open threes on 24% of his shot attempts last season, he’s down below 18% this year. More importantly, he’s taking far more threes with a defender 4-6 feet away, up from about 22% last season to over 31% this season. He’s also shooting much worse with a defender in that range, hitting 31.6% of those attempts, far below the 42.6% he hit last year.

Schematically, it’s pretty clear defenses are keying on his shooting, which makes the massive improvements in his ability to attack a close out over the last couple of years all that much more important. Still, there’s no chance that Bryn will ever be able to create as much value off the bounce as he can catching and shooting.

The Rockets’ game may have marked a turning point for Sparty, and if so, his shooting could go a long way towards opening up the floor for the rest of the team. If not, the Spurs will need to take a hard look at making yet another adjustment to the rotation. At 36% from deep, Bryn’s shot volume would need to go up dramatically to offset the other holes in his game. Given how dependent he is on others to create shots, that doesn’t seem likely.

That’s not to say that Bryn can’t find an open look on his own from time to time, but pull up threes only make up about 17% of his shots. The Spurs could certainly look to increase that a little, but when he’s sharing the court with DeMar DeRozan and LaMarcus Aldridge, both of whom are much more valuable on the ball than off, the ceiling on that number just isn’t high enough to make much of an impact.

In the long term, regression will almost certainly come for the individual slumps, but the slight decline in wide open shots and the reduction in corner threes are somewhat concerning developments that speak to an offense that isn’t able to compromise the defense quite as consistently as before. Of course, the system is interconnected. There’s a decent chance that as the Spurs’ shooters begin knocking down more shots, the whole thing will flow more freely, and those high value corner threes and wide open looks will return.

Still, the Spurs’ offense is a minor concern compared to their defensive issues, though the two are clearly related. The team has been playing more offensively-minded players to put points up on the board, so at least some of their weaknesses on the defensive end stem from paying a defensive price for a scoring payoff they aren’t getting.

The good news is it appears the team may have already addressed at least part of that shortcoming, with the ascension (and darn near explosion) of Lonnie Walker IV into the rotation against the Rockets. Where he fits and how much he plays is still an open question, but there’s little doubt about the level of impact he could have on the team as one of their few players who can both shoot it well from deep and defend at a high level.

If the team can return to form as one of the most accurate squads in the league, the offense will be just fine. If they can’t, they’ll need significant improvement on defense to even be competitive on a nightly basis. If they can do both, it’s still possible they could right the ship before it’s too late and extend that postseason streak another year, in which case, a little regression and a lot of Lonnie could be just what the doctor ordered.