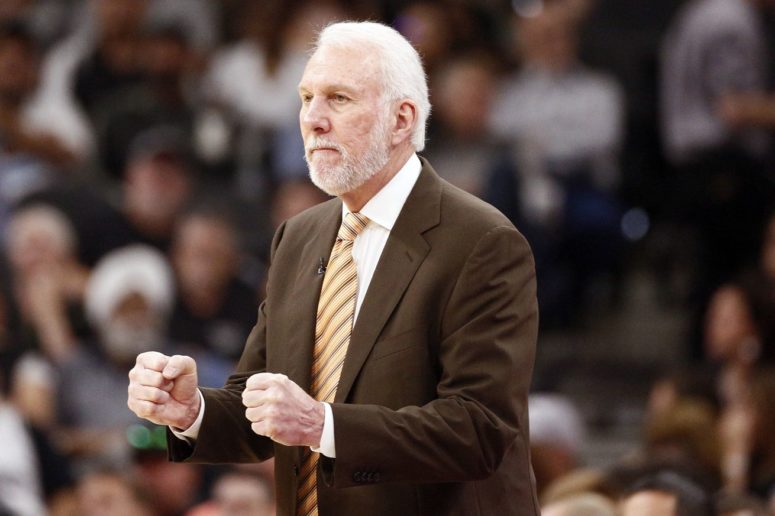 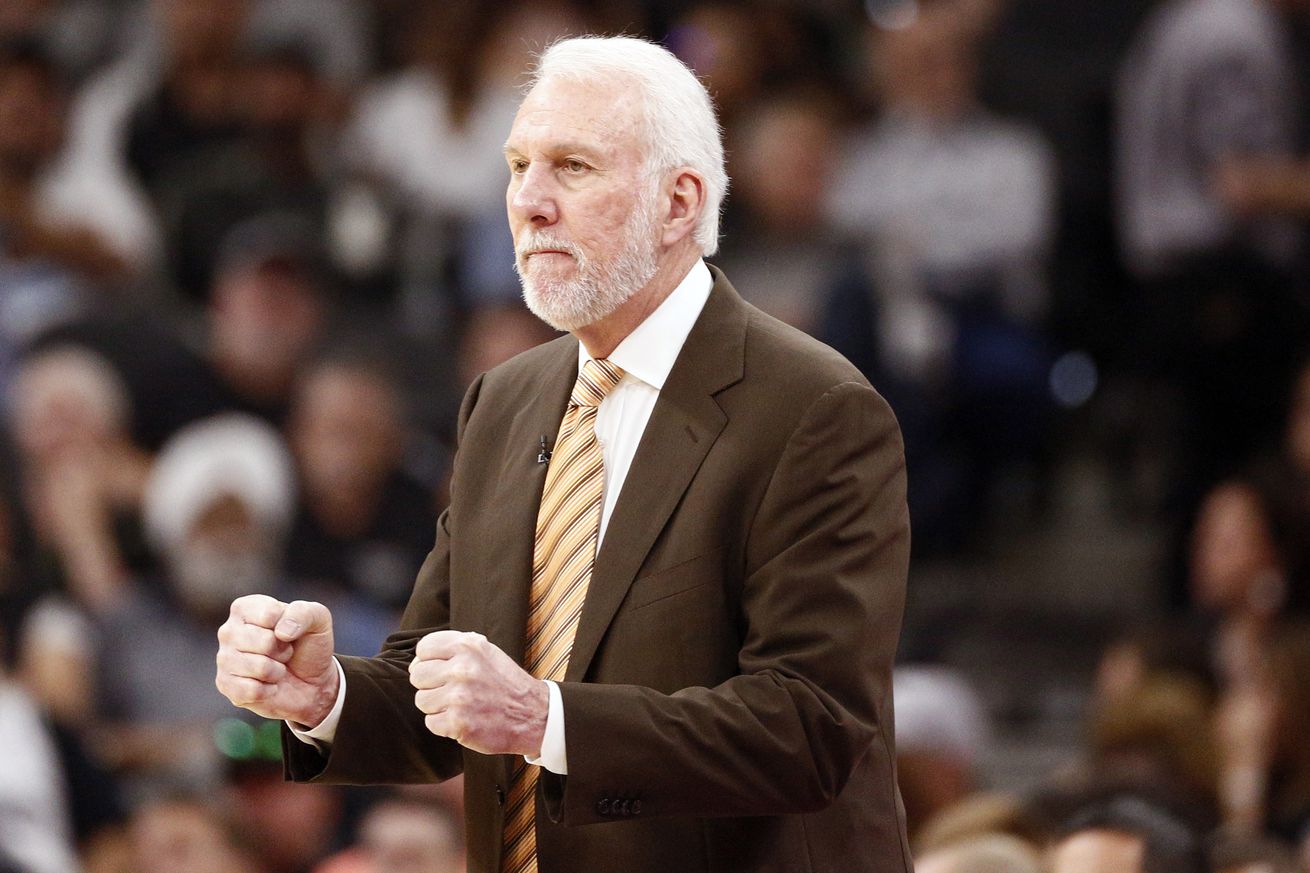 It’s improbable bordering on impossible, but can Pop keep coaching for 10 more years?

One thing is all but certain when it comes to the San Antonio Spurs: they are never going away, at least not as long as Gregg Popovich is running the show. The 68-year-old grandfather is already the oldest coach in the NBA by a couple of years (who would have thought Mike D’Antoni is only two years younger than Pop?) and not far from breaking Hubie Brown’s record of coaching until the age of 72.

When recently asked what passing Phil Jackson on the all time win list for coaches would mean, which he accomplished last night with a win over the Phoenix Suns, he had this classic Pop response:

“Yes, it’s the most important thing in my life. Even my grandchildren can take a hike. What I might do when I retire, what kind of wine I’m going to have with dinner, all those things pale by comparison when I think about how many wins I have. I hope I can coach long enough to have more than anyone has ever had them. I want more than everybody.”

(This is just part of a 17 minute press conference Pop granted to the media prior to the Spurs-Celtics game last week. If you haven’t read Paul Flannery’s piece on the entire interview, I encourage you to do so.)

If just the thought of Pop coaching until the age of 78 wasn’t enough to convince you how inconceivable that is, his comment above should be telling enough. He clearly sees a future for himself beyond basketball, and there are actual basketball reasons to believe Pop won’t be around for ten more years.

Pop used to repeatedly say he’d be out the door 15 minutes after Tim Duncan retired. Even though we are now in year 2 A.D. (After Duncan) and Pop is still here, there is also the original Big Three to consider. Manu Ginobili, while still going strong, is 40 years old and has one more year (player option) left on his contract, while Tony Parker, 35, is recovering from a surgically-repaired torn quadriceps.

While the former All-Star point guard is determined to come back better than ever and has a set goal of playing with the Spurs for a franchise-record 20 seasons, that only takes us through 2021, and as Pop has previously noted regarding the most successful trio in NBA History:

“I will feel very weird walking out onto a court and not seeing Timmy or Manu or Tony out there. [They are] kinda like my safety blanket or my comfort level. I’ll miss them a lot.”

Despite knowing Duncan was on his last legs back in 2015, Pop still signed a contract extension through the 2018-’19 season, his reason being that he promised his biggest free agency acquisition, LaMarcus Aldridge, that he would stick around through his initial contract with the Spurs. Having recently signed an extension himself, Aldridge is now signed through the 2019-’20 season with a team option for 2021.

With the above known, 2021 seems like a reasonable year to monitor when it comes to determining when Pop will switch from being an NBA coach to a full-time grandfather and wine connoisseur. However, nothing is set in stone, which leads to the question:

What if Pop could keep coaching for 10 more years?

It will definitely be awkward seeing Pop coaching out there without any of his original Big Three, but there are reasons to believe Pop can keep going. The most obvious is Kawhi Leonard. Besides his promise to Aldridge and the presence of Ginobili and Parker, surely one of the biggest factors keeping Pop around today is the challenge of building around a new superstar whose personality oozes with Spursiness and whose game has been molded by Pop himself.

There’s a reason he traded George Hill, one of his all-time favorite players, for the unpolished rookie back in 2011. Pop knew Leonard, a raw but excellent defender with no shooting touch out of college, would be something special long before anyone else did. He was even proclaiming him to be a future star as early as his rookie season while most others saw little more than a slightly-better version of Bruce Bowen.

If one of Pop’s reasons for retiring once Duncan left was concern that the Spurs could no longer contend without one of the best players the league as ever known, then he’s done too good of a job coaching up a new franchise player to use that excuse anymore. As was the case with the Big Three, it’s hard to imagine Leonard ever leaving the Spurs, but if for some reason he takes a page out of Aldridge’s book and requests that Pop remain head coach throughout his tenure, it’s at least imaginable that the coach would oblige.

Another reason Pop could keep coaching for much longer is, as previously stated, he loves new challenges. Not only does the ever-evolving NBA keep his mind fresh as he finds ways to deal with new trends, stars and even superteams, but he also has more players to build upon than just Leonard.

Dejounte Murray is his newest pet project. A quick learner who is already showing excellent leadership qualities, Murray is like no point guard Pop has ever coached before. With length for days and excellent defensive instincts, Murray is basically a more athletic Hill minus the shooting touch. If Pop and assistant coach/shooting guru Chip Engelland can turn Leonard into a premier scorer, why not Murray?

Finally, if a slimmed-down Aldridge can keep up his better-than-Portland form after having a heart-to-heart with Pop over the summer, the Spurs might have a new Big Three on their hands that will keep them in contention for years to come, and why would Pop walk away from a perfect situation like that? Of course the 32-year old Aldridge isn’t likely to be around for another ten years, but knowing the Spurs, they’re probably already planning to draft or sign a young big soon to start grooming him to take over when the time comes: yet another new challenge for Pop.

Speaking of which, if Pop does have the core of another championship team on his hands and chooses to stick around for ten more years:

How many more championships could he win?

That is a tough question. With the superteam Warriors looking to dominate for years to come and more superteams being built to challenge them, it will be a massive undertaking, but if any coach is up to it, it’s Pop. He always finds a way to have his team right up there with the best, and who knows what would have happened had Leonard avoided Zaza Pachulia’s foot while leading by 25 points during Game 1 of last year’s Western Conference Finals?

Knowing Pop’s ability to find and mold fresh talent and remain in contention despite what the rest of the league is doing, two more championships seem about right. Already a Finals MVP, Leonard has what it takes to lead a team to a championship, and odds are the Spurs will get by the Warriors at some point. Add another for good measure, perhaps after the Warriors era, and you’re right at Pop’s average of approximately one championship every five years.

Unlikely as it may be, Gregg Popovich has what it takes to coach the Spurs for another ten years. If he does, he will no doubt go from being one of the greatest coaches of all time to the absolute best, no questions asked. The fire still burns in Pop, and as long as he’s around, the Spurs will never go away.