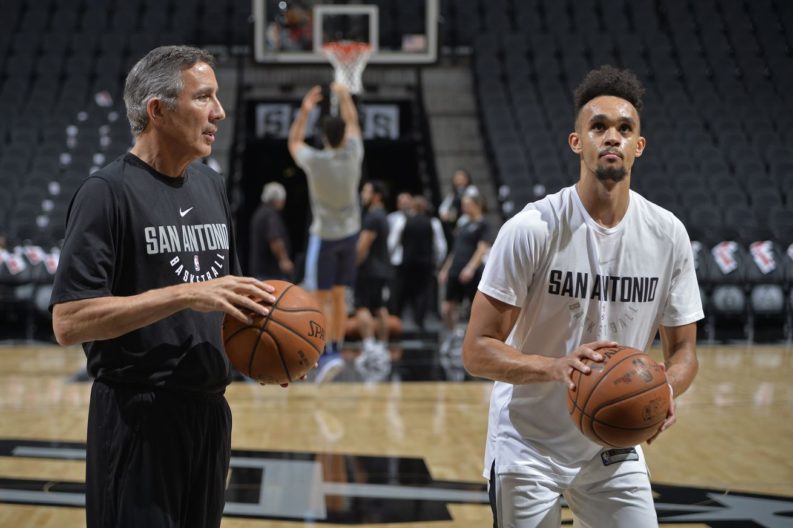 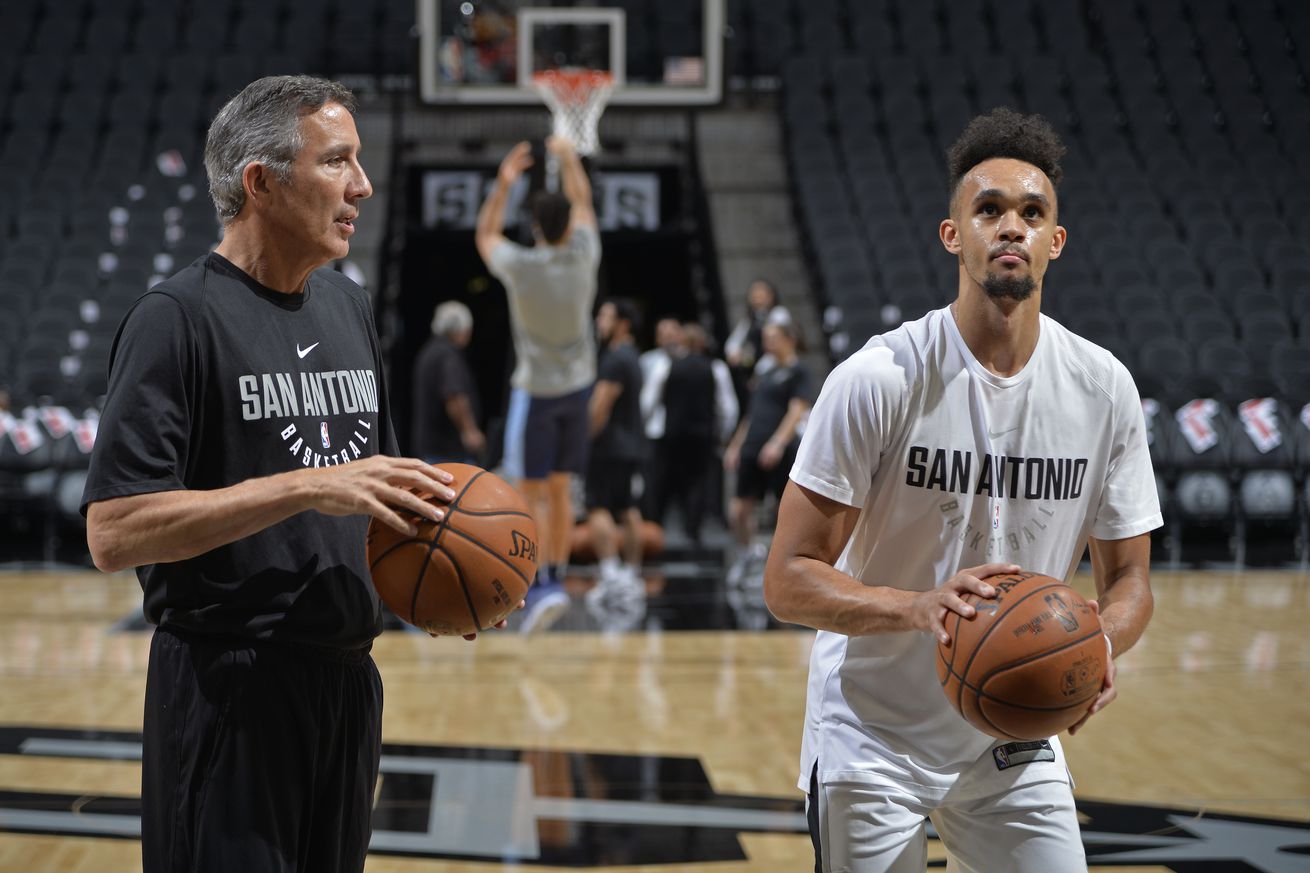 Winning a title while wearing #4 is a tradition that must be continued.

There’s been a single uniting factor in each of the Spurs’ five title runs. No, I’m not talking about Tim Duncan, although he did anchor the team in every championship. What I mean is that there are six jersey numbers that have been associated with 4 different championships. Yesterday, we discussed #2. Today, we celebrate #4.

Spurs By the Numbers is an analysis of the players who have worn specific jersey numbers throughout the Spurs history. Perhaps there is pattern to the Silver & Black’s best seasons, or perchance there is a randomization to the Spurs dynasty. Does the number a player wears foretell the success of the team overall? We shall soon find out.

Perhaps no greater pressure to win a title lands on any other player in the history of the Spurs than does the weight that sits on Derrick White. Allow me to explain.

Derrick White joined the Spurs this summer as the 29th pick of the NBA draft. Just as it has been for years, the Spurs have been credited with acquiring a great pick that slipped through until R.C. Buford & Co. made the rest of the league scratch their collective heads. Derrick White was assigned #4, and he was as excited the Spurs chose him as the Spurs were to acquire the Colorado standout. Even Pop felt the need to call to welcome him:

As it turns out, the last four individuals to don the #4 have won an NBA title withthe San Antonio Spurs. We have a streak here people! It was always the destiny of #4 to be Championship bound. Quatro made its debut with John Paxson in 1984. Paxson spent his rookie season coming of the bench as a point guard behind Johnny Moore. After two seasons backing Moore, Paxson moved to Chicago as a free agent where he started alongside Michael Jordon. Paxson went on to win three titles as a player and one as an assistant coach, all in the Windy City. He is currently the President of Basketball Operations for the Bulls.

Kerr spent his first season with the Bulls before Paxson retired and became an assistant coach. Then Kerr would mirror Paxson’s 3peat of rings in Chicago along the same duo of Michael Jordan and Scottie Pippen. Kerr then left the Bulls at the end of the 1997-98 season and brought his penchant for title teams to San Antonio. He wore the number 4 from 1999-2001 and earned his 4th consecutive ring with the Spurs 1999 Championship season. Kerr left the Spurs only to return a year later and nail down another ring (albeit as #25, but that’s for another day). Steve Kerr has since gone on to coach for some California team and resurrect their career with two more NBA titles as head coach.

Just like with #2, there was no one wearing #4 in 2003, so the next title appearance of this titular number was with Sean Marks. Like Paxson and Kerr, Marks has acquired rings as both a player and part of a coaching staff, but in his case both came through San Antonio. The New Zealand born Marks played with the Toronto Raptors and Miami Heat before joining the Spurs in 2003. He did not play in his first season with the Silver & Black due to a case of patella tendonitis, or jumper’s knee, an inflammation of the tendon in the kneecap. He did however contribute off the bench to the Spurs 2005 Championship season.

He played one more season in San Antonio (as #40) and five more overall before retiring as a player in 2011. He joined the Spurs staff in 2012 as basketball operations assistant while simultaneously serving as general manager of the Austin Toros. One year later, he joined Pop and Co. on the sideline as an assistant where he spent 3 years and collected a 2nd NBA title, this time as an assistant coach. In 2016, Marks signed a four-year contract as the General manager of the Brooklyn Nets, ever expanding the reach of the Spurs championship pedigree.

So, why did Sean Marks change from #4 to #40 over the summer of 2005? To make room for Michael Finley, who up until then had only worn #4. The Dallas Mavericks All-Star joined the Spurs in 2005 as an unrestricted free agent. His prolific combination of scoring, assists, and steals fit the Spurs beautifully, especially as he moved in a role coming off the bench. En route to the Spurs 2007 title, Finley went 8 of 9 from beyond the arc to help clinch the first round in the playoffs besting Bruce Bowen’s record of seven 3s in the postseason.

Unfortunately, Fin Dawg wanted a larger role than the Spurs could offer and he asked PATFO to buy out his contract and waive him in time to catch on with another team. Pop and Finley parted ways cordially upon request. He left in 2010, but the #4 jersey void would not remain.

Danny Green’s is the story of true Spurs persistence. It is quite possible no other player to wear a Spurs jersey has been more in tune with San Antonio’s Way and System than Danny Green. To be the leader of a team is one thing. To be as over himself as Green represents a completely different level, especially considering the uncertainty with which he traveled on his journey to the top of his game. After trips in and out of the D-League (yes “D,” unless I get a lifetime supply of fruit punch Gatorade I will never refer to it as G-League), Danny finally found his true home with the Spurs. He is an elite defender whose greatness is overshadowed by the league’s most elite defender. He has a 3-point shot that briefly had him in the record books for most made 3s in an NBA Finals.

And he took a “pay cut” to stay with the Spurs before he ever cashed in. Green bought in hook, line, and sinker. Without him, the 2014 Finals may not have been obtainable. He had double-digit scoring in each closeout game of the playoffs leading up to the Finals. I don’t know if there has been a player more personally vested in the Spurs, and that is saying a lot considering the cast of stars the Silver & Black boast.

Danny Green traded in his #4 for his preferred #14 after the Spurs won in 2014. Perhaps, like Steve Kerr, Danny Green will win two championship rings with the Spurs while wearing two different numbers.

A fan can dream, after all.

And that brings us right back to Derrick White. White must keep the streak rolling. Every player to wear #4 in this millennium also wears a ring. Big shoes to fill, young grasshopper, big shoes.

Who wore it better? Yankee Noodle Danny- quite honestly the best possible switch when any team’s best shooter wants to shake Kawhi Leonard– Green can be just as lethal without all of the appropriate fear that should come from shooters. Just ask Steph Curry!

NEXT UP: Do you know the next number to have been featured in four of the five Spurs Championships?