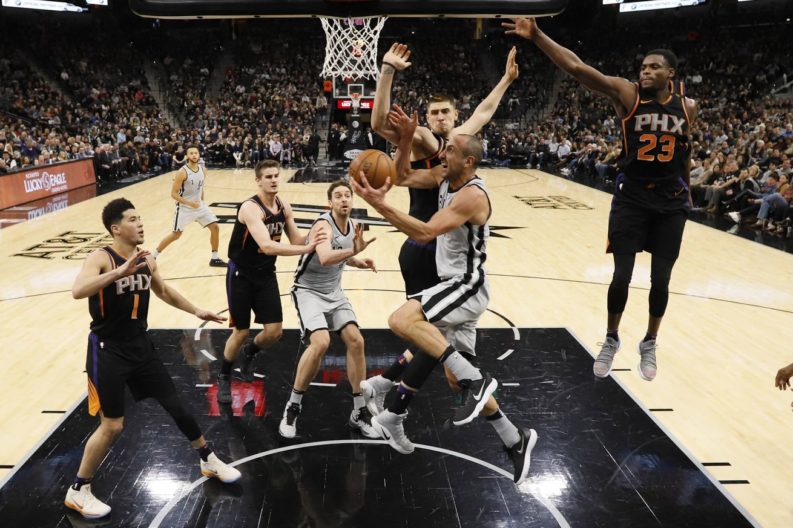 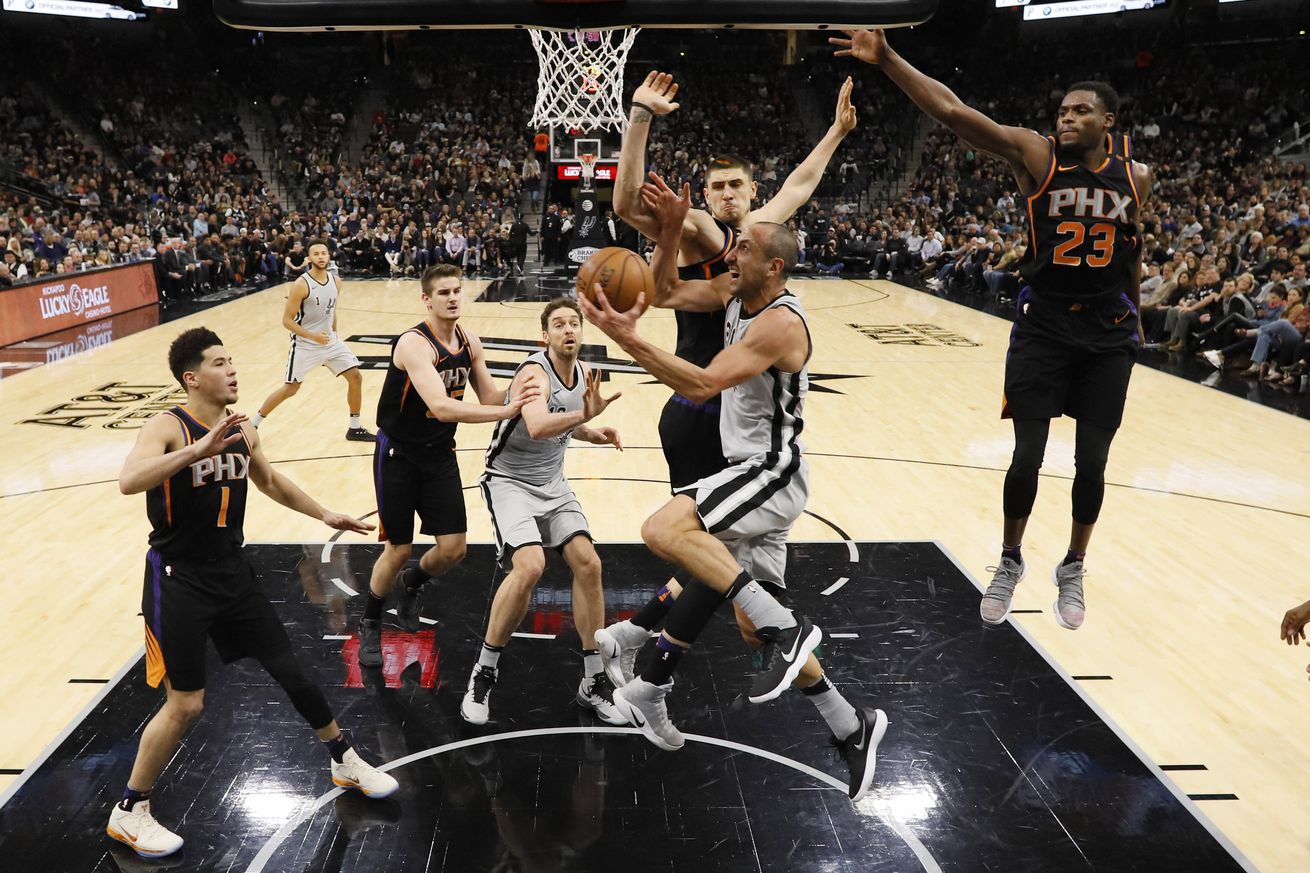 It was the first question Manu Ginobili fielded after the Spurs’ 103-89 win over the Phoenix Suns, and one he knew was coming:

What is in the Grandpa Juice?

The ageless Argentine scored 21 points off the bench — the most ever scored by a 40-year-old in under 20 minutes — to help the Spurs come away with their 13th straight win at home. He did it from deep, hitting three of his four three-pointers, and at the rim, where he contorted his body multiple times in ways no quadrigenarian’s body should be able. He even scored once with his right hand!

With both the bench and the guys on the court yelling “LEFT! LEFT! LEFT!” Manu goes right and scores with his right. #StillManu pic.twitter.com/2M5J2pkgq2

Ginobili’s veteran smarts stood out against the Suns, one of the NBA’s youngest rosters, a team with three players that are as old as the film Con Air. Missing one of their best scorers in T.J. Warren, the Suns were consistently flustered by the Spurs’ length and defensive pressure on the perimeter. San Antonio collected a season-best 15 steals, making up for a large portion of the Suns’ 23 total turnovers on the night.

The man behind much of that thievery? Two-time Defensive Player of the Year Kawhi Leonard, who spent 29 minutes making life difficult for Phoenix. He had four steals (and three blocks), and that’s not including plays like this one where his pressure helped cause the turnover:

Kawhi had four steals (and three blocks) against Phoenix, and that’s not counting this one here which led to two points the other way. pic.twitter.com/SMvUtUEel2

Leonard also tied Ginobili for a team-high 21 points, going 9-of-19 from the field and continuing to seek out his rhythm on the floor. There were moments where he still appeared to be a half-a-beat off, like when he missed Gasol rolling under the basket, but it was overall another promising step in the right direction for the star forward. He found his shot (and teammates) in the pick-and-roll, called out for isos, and had this beaut of a drive, finishing with the left-handed reverse.

With the Klaw, everything remains self-contained, although you can at times see the troubleshooting process play out in rare, emotionally transparent ways. With three minutes to go in the second, he knocked down his only three-pointer of the game but, with a previous play still playing back in his mind, jogged back down the floor, head down and shaking back and forth. On the ensuing defensive possession, he stole the ball and drew a foul on a fast break. The one after that, his poor pass to Tony Parker, on a routine play, led to a Spurs turnover. As he took to the bench, he appeared once again dissatisfied, hardly resembling someone with 14 points, three steals and two blocks midway through the second quarter.

With the win in hand through much of the final quarter, it was easy to forget that the Spurs were playing without three key players: Danny Green (groin), Rudy Gay (heel), and LaMarcus Aldridge (rest). A big reason was the stabilizing presence provided by Tony Parker and Pau Gasol. Parker only had four points in the win, but he was the proverbial paille that stirred the drink, picking up a team-high seven assists. Five of the 11 San Antonio three-pointers on the night came off Parker dishes, two of which found Gasol wide open above the break.

Tony Parker assisted on five of the Spurs’ 11 three-pointers tonight. He had seven assists total. pic.twitter.com/L6PfCUeamL

You can consider these easy dimes, but Gregg Popovich doesn’t. He knows about his team’s swooning percentages behind the arc this season (36% — 16th in the NBA) compared to last, when they led the league in three-point percentage (39.1%). Here’s him before the game:

“Teams understand analytics, and that means three-point shots. If you can’t shoot, you can’t win. I guess we’ve won decently, but our three-point shooting is drastically worst last year. It shows in wins and losses — you’ve gotta shoot the basketball.”

And here’s an interesting on/off comparison regarding the Spurs’ three-point shooting:

Parker doesn’t do anything fancy these days, but his combination of penetration, passing and execution in the pick and roll is often the tide that raises all ships on the Spurs offense.

The same could be said Pau Gasol, who had a heavier defensive load to carry with Aldridge out on Friday, but still managed to put up a tidy 15 points (on 6-of-8 shooting) and seven rebounds. Between he, Parker and Ginobili, you could make the case that three of San Antonio’s four best players were on the wrong side of 35, suggesting that Ginobili’s famous tonic is being passed around the locker room not unlike MJ’s Secret Stuff.

“I thought I was gonna retire and took a two-month vacation. I just went to Spain for 47 days, thinking I wasn’t gonna come back. This summer I did the least in… ever.”

“I’m feeling good and, I’ve said it already multiple times, but I’m enjoying what I do. I’m not in pain. I’m being well taken care of by the staff, by Pop. And that really helps to feel good when I’m in the game.”

There’s always been a mirth to Ginobili’s style of play, both in the feelings it injects into fans, and in the buoyant spirit that drives it, and it’s encouraging to see that continue in year 40. As Bugs Bunny as it sounds, maybe the secret ingredient in Grandpa Juice is precisely that: joy.

The Spurs, forced to go small(er)

With Aldridge resting, we knew Pop would have to get a little creative with his rotations. That began early, with Kyle Anderson getting the start at power forward, making it 15 different starting lineups the Spurs have rolled out through their first 40 games. Anderson was, as usual, quietly solid in the start (4 points, 5 rebounds, 3 steals, 2 assists), even knocking down his only three-point attempt.

Things got more complicated when Joffrey Lauvergne, contact magnet, butted heads with Marquese Chriss during a screen and was forced out temporarily. As a result, we saw extended minutes of Davis Bertans at the five, trying to body up with the likes of Tyson Chandler.

Those lineups didn’t look great, but Bertans had another fine game (12 points, seven rebounds), doing plenty of the little things, including showcasing some nice verticality on some rim defense, to keep him on the floor.

Forbes not afraid to let it fly

When asked if Bryn Forbes would be starting again at shooting guard, Pop gave this deadpan response:

“Yes — it doesn’t mean that other people can’t shoot. It doesn’t mean he has to shoot it every time. Shooting guard is kind of a phrase from 30 years ago.”

(Forbes was second on the team in field-goal attempts with 16, scoring 16 points in the win.)

The third traditional big in the Spurs’ rotation has had a few health setbacks, and is still dealing with a taped-up middle finger on his shooting hand which, even Pop noted, has made things difficult for him. Much of what Lauvergene flashed in the preseason — especially his sweet passing touch — depends on having that dexterity, which is why I’m willing to give him a pass until he’s back to full health.