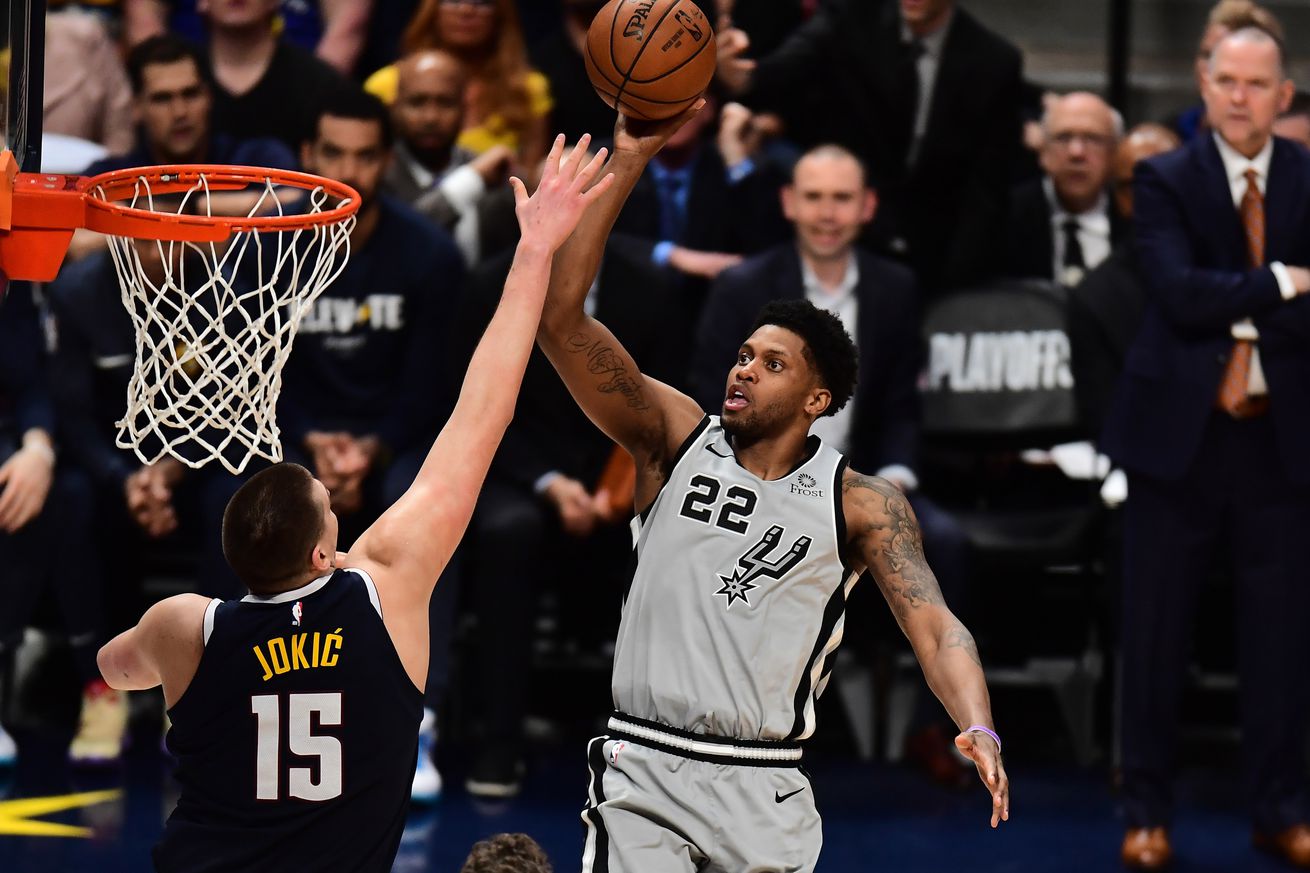 A busy draft night, philosophical recalibrations, and Rudy Gay’s free agency all loom over a San Antonio offseason that’ll be as volatile as they want it to be.

This summer in San Antonio is a thought experiment, a tangled hypothetical of roster-building, basketball philosophy, and how much an organization should value the parts that added up to 48 regular-season wins and a 7-game first-round exit. There’s a pretty clear path to building on a relatively successful 2018-19, but just how much PATFO should stick to that track leads to a number of fundamental concerns surrounding how they can go about this offseason.

Despite Gregg Popovich’s end-of-season presser leaning towards continuity and minor tweaks, it’s also true that the Spurs are far from where they’re used to being in the NBA hierarchy. Even for a team that’s not known to cut corners when it comes to process, it would be an oversight if they didn’t kick the tires on more radical options on how to improve.

And thus, we have questions — some of them we’ll only be able to answer months into the 2019-20 season, while some answers will reveal themselves by October. I’ll focus on the latter here and follow up with individual articles for each one as this (potentially) pivotal summer rolls on.

One of the bigger questions is also the most straightforward. Gay improved in a number of ways in his second year in San Antonio, moving past a devastating Achilles injury to evolve into the platonic ideal of a modern stretch four. His averages of 13.7 points, 6.8 rebounds. 2.6 assists on 50-40-81 percentages are nothing to snuff at.

Gay also turns 33 in August and, in looking at potentially his last sizable, multi-year payday, may find himself wanting to chase any combination of more money, a better chance to contend, a less rigid systemic fit, and more opportunities to start. Pop hasn’t always felt comfortable depending on him, but the roster is certainly worse on paper if he goes elsewhere — especially given the team’s minimal cap room.

Pop indicated that re-signing Gay would be a priority for this team, and it makes sense for the Spurs to emphasize doing so. The team can bring him back, work Dejounte Murray and Lonnie Walker IV into a playoff-level roster and still sign a difference-maker with their $9.2 mid-level exception. We’ll see if it’s also what Gay wants.

DeRozan was one of just 5 players in the entire league to average at least 21 points, 6 rebounds, and 6 assists last season, adapting to a new system and organization about as well as anyone could’ve expected. He also made all of 7 three-pointers in his first season in San Antonio — and zero in the year 2019, resulting in his most ineffective three-point shooting season since his sophomore year in Toronto. Pop addressed that area of DeRozan’s game in April:

“I think that that’s something that we really have to discuss and think about, because that’s what the league is all about now. You end the game and the first thing you look at is three-point shooting… it covers up a lot of warts.”

The lack of an outside shot is what people will continue to focus on with DeRozan, an effective and entertaining player whose midrange-oriented-game is the wart many refuse to overlook. The four-time All-Star is known for adding new elements to his game every offseason, but how realistic is it for him to reach even league-average levels after shooting no better than 33.8% on any individual season?

Related: would he do so by altering his dubious three-point form, by simply trying to be better as a pull-up or catch-and-shoot threat, or do the Spurs look to increase his looks from the corner and hope for the best?

Will the Spurs spurn the three ball again?

The Spurs proved that you can build an effective offense without relying on the three ball. They finished with the 6th best offensive rating in the league in the regular season, and posted a similar number against the Nuggets in their 7-game series.

Circumstance may force them to double down on it, Analytics 101 be damned. PATFO can cobble together some better defensive lineups with Murray back and treat the offense as a project to explore through the regular season.

But much of what happens in April (and May, hopefully) will be determined by how they build this team this summer. Function will follow form, and the Spurs will ultimately lean on their players’ strengths rather than changing them.

There are things that can happen on the periphery that can benefit the offense, to be sure. Walker could flash potential immediately as a bench scorer; Murray could bounce back from an ACL-imposed year off; Patty Mills and Marco Belinelli could sustain their level of possession-saving play for another year; DeRozan could make his way up to a league-average shooter from outside, and it would be just the start of improvements needed with the existing San Antonio core. The latter isn’t something the Spurs would want to pin their hopes on as they build next season’s team, and none address the spacing question at the heart of this team’s makeup.

It’s early to project what the starting lineup will look like next season, but consider that 5 of the most impactful Spurs currently under contract going into next season, in no particular order are LaMarcus Aldridge (23.8% on 0.5 attempts per game), DeRozan (15.6% on 0.6 attempts), Derrick White (33.8% on 2.1 attempts), Dejounte Murray (26.5% on 0.4 attempts in 2017-18), and Jakob Poeltl (N/A). At least 4 of those 5 probably make up an optimal lineup the team would want on the floor, if not for the fact that their shot charts converge into a singularity that eventually would swallow everything inside Loop 1604. Throw Rudy Gay in there (40.2% on 2.7 attempts last year, 34.8% in his career) and the calculus looks a little better, but there’s reason to doubt Gay being as proficient again (especially considering he was 33.3% after the All-Star break), and he still has a penchant for getting to his spots inside the arc.

Pop has already said he wants to see White improve from deep, but it’s hard to know what to expect from Murray (due to injury) or Aldridge (due to habit, preference or miscellaneous). If everyone makes a marginal improvement in efficiency and volume, the outlook for next season becomes very palatable; if not, there may continue to be a ceiling on how good they can be, and how deep of a postseason run they may have in them.

There are options here. Whichever path the team goes down should take shape over the summer.

What happens on draft night?

I’ve taken a stab at predicting the Spurs’ approach here, and I’ll do it again as we approach June 20th, but it’s anyone’s guess as to how that night goes. They could keep the picks and make very Spursy selections for all three, but there are scenarios in which their guy(s) fall to them at their respective spots, or a trade-up makes sense if they like a particular top-10 talent, or that they make other moves with either first-rounder.

Which brings us to the last big question:

You’re already familiar with the 2011 trade that sent Popovich favorite George Hill, who’d just turned 25 and was still on his rookie contract, to the Pacers for San Diego State standout Kawhi Leonard, who was nabbed with the 15th overall pick. A risk-averse team looked itself in the mirror, saw what it might take to elevate itself once more, and decided to push some chips in.

While you can’t treat the past as an analogue for what may come, it’s worth looking at the similarities between now and then and see if a similar rubric may apply to anyone this summer.

History probably won’t repeat itself with a current player, but that doesn’t mean we can’t try and identify who that would most likely be anyway. We’ll explore that and the other questions in (far too much) detail in the weeks ahead.