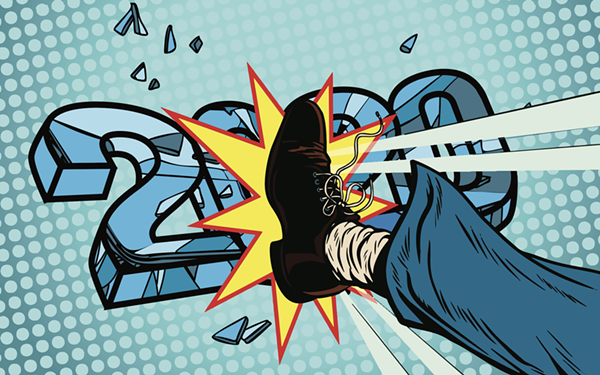 The global pandemic was the top news story of 2020, representing the biggest disruption to daily routines, the economy and public safety most of us have experienced in our lifetimes.

But that doesn’t mean it was the only big story this year. There were also massive street protests over police accountability and racial justice, a contentious election that unseated a divisive, unpopular president and plenty of political infighting and scandal. What follows are some of the highlights and lowlights.

1. Economic uncertainty
More than 4 million Texans have filed for unemployment relief since the pandemic began, and the state’s unemployment rate is now double what it was at the start of the year. As the legislative session starts in January, lawmakers must grapple with a budget shortfall caused by deep cuts in sales tax revenues. San Antonio’s economy has been hit particularly hard by a near standstill in tourism and conventions, and even local leaders prone to positive spin acknowledge our rebound isn’t likely to be quick.

2. Reality bubbles
Both locally and nationally, it became abundantly clear in 2020, that siloed news consumption is leading some of us to divorce ourselves from reality: some seized on the notion that the November election was fraudulent, others claimed COVID-19 is no worse than the flu. Cue the widely watched video of former Bexar County Republican Cynthia Brehm’s shambolic May press conference, in which she claimed the pandemic was a hoax ginned up by Dems to embarrass President Donald Trump.

3. Local control
The pandemic deepened an existing schism between Democrat-dominated municipalities, including San Antonio, and the GOP-controlled state government. As case numbers worsened, local officials tussled with Republican Gov. Greg Abbott over their ability to mandate masks and limit gatherings. Meanwhile, Abbott has pledged to back legislation that punishes cities such as Austin that cut police budgets under pressure from activists.

4. Police accountability
Black Lives Matter members — along with masses of people who don’t necessarily consider themselves activists — took to the streets of San Antonio and cities nationwide to protest the death of George Floyd at the hands of Minneapolis police. This comes as the city embarks on new collective bargaining with its police union and as members of council hint that they’re ready to change the way discipline is handled under the contract. By some tallies, state lawmakers have filed a record number of police accountability bills ahead of the new legislative session.

5. The mayor’s new groove
Mayor Ron Nirenberg narrowly won a second term, battling it out in a runoff with former city councilman Greg Brockhouse. That came after voters in 2018 approved two of three charter amendments aimed at punishing city hall for failing to reach a labor deal with its fire union. Fast forward to this November, when 77% of San Antonians approved the SA: Ready to Work ballot measure, which aims to retrain 40,000 residents as part of the city’s pandemic recovery effort. The victory and recent polls suggest Nirenberg may not be as vulnerable when he seeks office again in 2021.

6. A rift on the right
The pandemic also highlighted a growing gulf between the far right of Texas’ Republican Party — represented by firebrand chairman Allen West — and Abbott’s mainstream wing. West and his allies held a rally outside the governor’s mansion this fall, blasting Abbott’s efforts to contain the spread the coronavirus. For his part, the governor has largely avoided addressing the fall’s COVID-19 surge in a bid to stave off criticism and a challenge from the right wing of his own party when he’s up for reelection in 2022.

7. Dems couldn’t close the deal
Democrat Beto O’Rourke’s near-miss challenge to U.S. Sen. Ted Cruz, President Trump’s unpopularity and Texas’ changing Demographics made it look like 2020 might be the year a blue wave finally washed over the state. Not so. Once again, Democrats failed to win a single statewide seat, maintaining a not-so-enviable record that’s been in place since 1994. Wins in the Texas Legislature were also scant, with a flipped Senate seat being the party’s sole significant victory.

8. Recognizing inequality
The pandemic has thrust San Antonio’s long history of inequality into the spotlight and prompted frank discussions among some political leaders about economic and racial divides. COVID-19 has hit communities of color especially hard, and the virus’ economic calamity has taken a heavy toll on low-income workers. A 2018 American Community survey found that San Antonio has the highest poverty rate of the 25 most populous U.S. metros with Detroit ranking second. Time to see how serious local leaders are about turning their talk into action.

Attorney general under fire: Former top staffers’ allegations of bribery and abuse of office against Texas AG Ken Paxton have blown up into a Texas-sized scandal around the already controversial elected official.

Arts and nonprofit funding: As the pandemic roiled the San Antonio economy, it created major budget problems for local arts organizations and nonprofits.