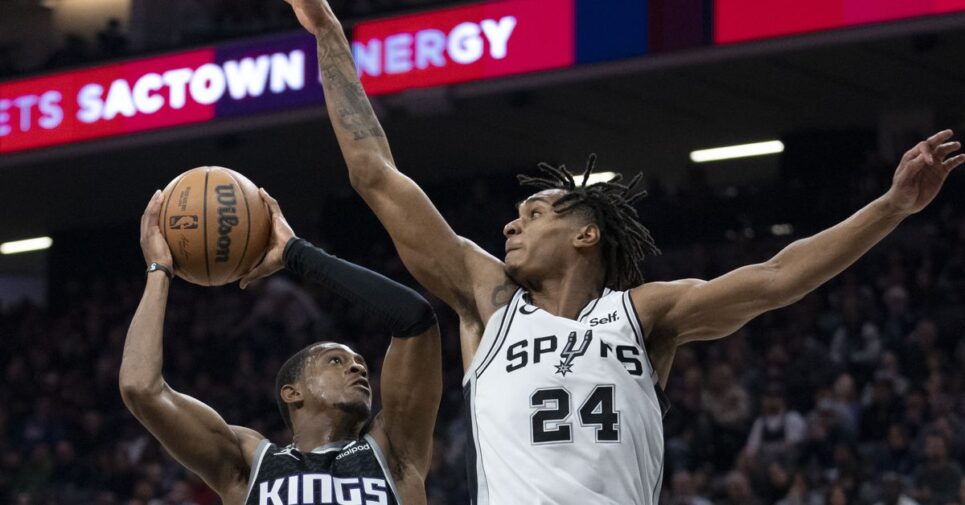 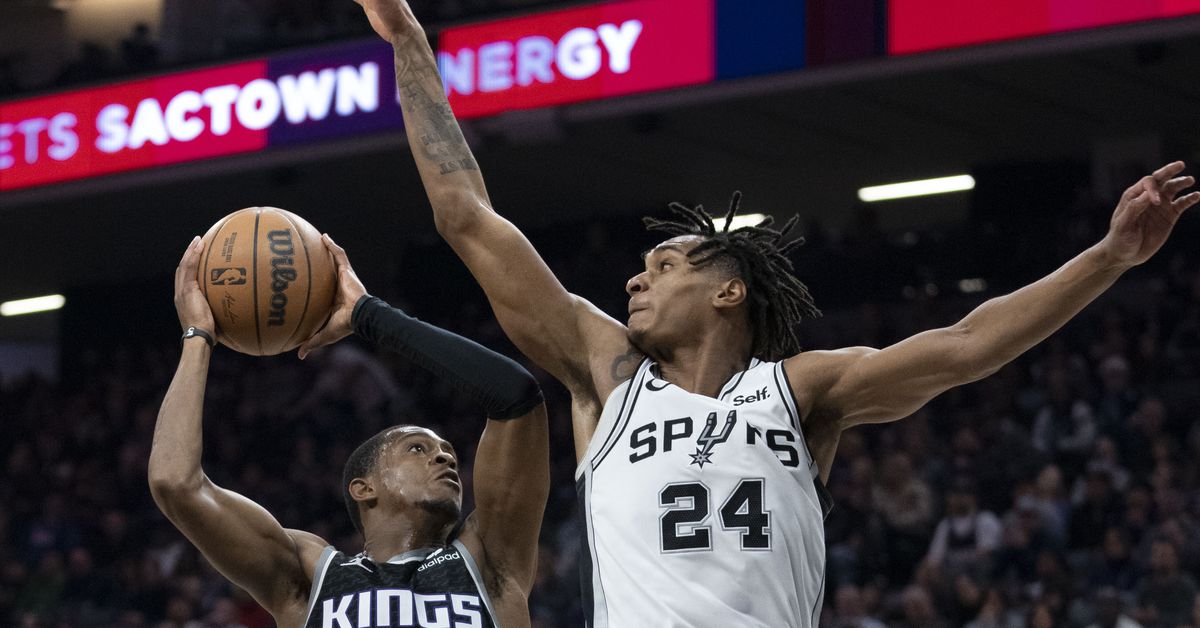 The Spurs are already on an exhausting road trip, in the middle game of a FIGASENI, and on their third game in four nights. It didn’t help that they were already short a few rotation players for the trip, and they got even more shorthanded with Keldon Johnson and Doug McDermott both being announced out not long before tipoff for various aches and pains. The result was more of the same for the Spurs: a slow start without their offensive leader, more competent play in the middle quarters giving them a fighting chance, but everything falling apart in the fourth quarter for a blowout loss to the Sacramento Kings, 130-112.

The first quarter alone was a game of runs. The Kings went on a 19-6 to start the game, culminating in a Gregg Popovich timeout after his team gave up an open three in transition. The lead was further extended to 22-6 before the Spurs responded 14-4 run of their own to get right back in the game, in large part thanks to 11 first-quarter points from emergency starter, Keita Bates-Diop, who ended the night with 16. Some mistakes kept the Spurs from getting any closer, but Isaiah Roby brought some energy off the bench and a three at the buzzer to get the Spurs within seven, 30-37.

But then, the second quarter started, and two points were mysteriously missing from the scoreboard. The Spurs were instead down 28-37, apparently because at some point, Bates-Diop had been credited with a bucket that didn’t actually happen. It’s hard to believe something like that could go unnoticed by literally everybody (including me), but alas. Regardless, the second quarter saw both teams play relatively even, with the Kings maintaining a 5 to 9-point lead almost throughout while the Spurs did enough to remain competitive, taking a 56-63 deficit into halftime off a Devin Vassell buzzer beater.

The Spurs came out for the third quarter a little stronger and finally started chipping away at the Kings’ lead, tying things up at 69 apiece when Jeremy Sochan posterized Domontas Sabonis for an and-one. There were several more ties throughout the quarter, but the Spurs could never capitalize on multiple chances to take the lead, and a 7-0 Kings run put them right back where they left off at halftime, ending the third quarter up seven, 89-82.

That run energized the Kings to start the fourth quarter, and the Spurs completely fell apart both under some full court pressure and the refs suddenly getting extremely whistle happy in Sacramento’s favor, who doubled up the Spurs on free throw attempts for the night. The Kings quickly extended the lead to 18, with former Spurs Trey Lyles and Chimeze Metu doing all kinds of damage that they never did in San Antonio. The Spurs cut the lead back down to 13 with just over 6 minutes left, forcing a Mike Brown timeout, but the lead remained in the teens for the rest of the night, and the Spurs dropped the third straight game of their West Coast swing, 112-130.

Play of the Game

The Spurs had several highlight-reel plays, especially in the middle two quarters, but of course it has to go to Sochan and “The Dunk”. As previously mentioned, he brutalized Sabonis so bad, Brown even challenged the play for an offensive foul to no success.

Up Next: Saturday @ Los Angeles Clippers

The Spurs are now headed to Los Angeles to finish their West Coast FIGASENI with a back-to-back against both LA teams, beginning with the Clippers. The Spurs gave them a fight at home a couple of weeks ago but couldn’t finish the deal, so maybe they’ll get some revenge. Then again, Kawhi Leonard did play tonight…