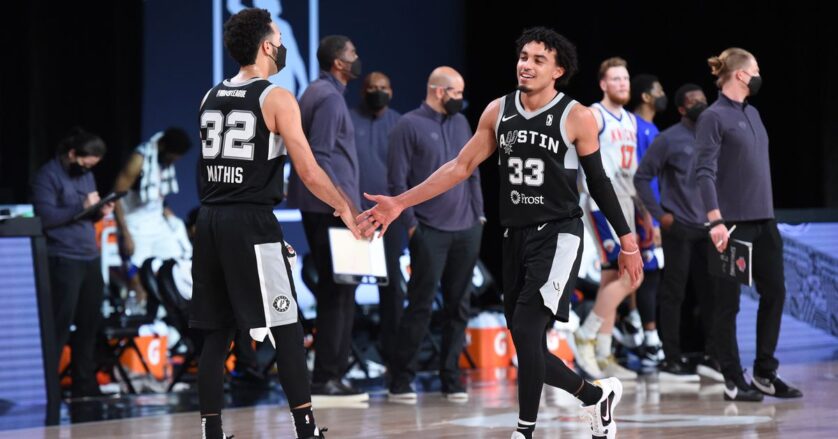 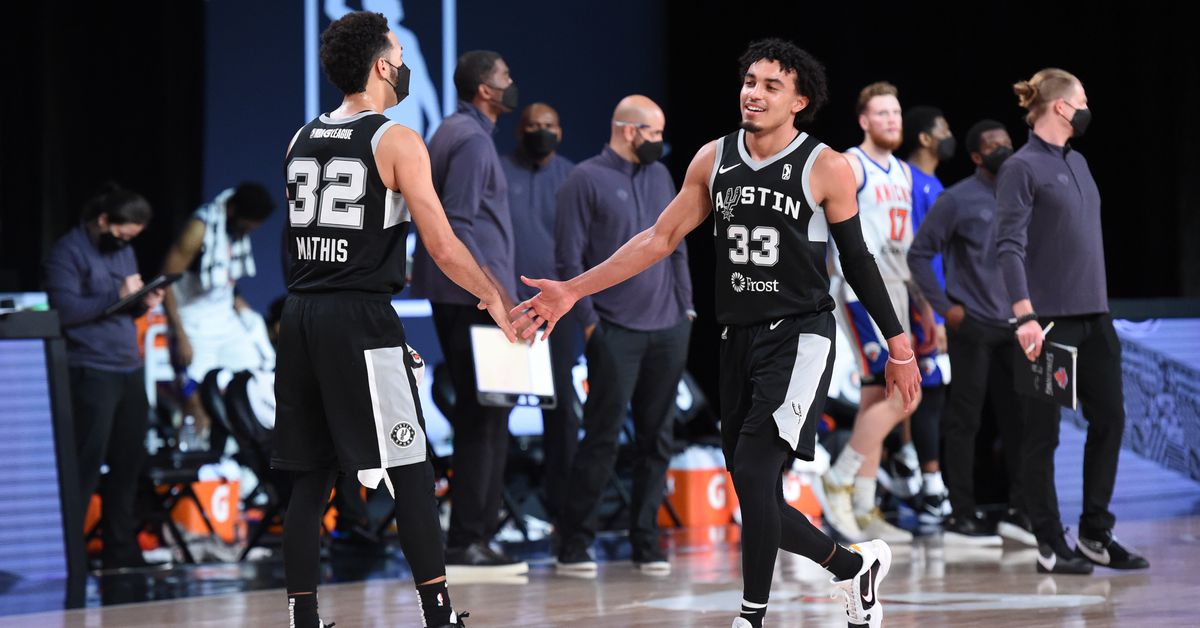 The Austin Spurs continued their trend of sluggish starts and furious finishes as they notched another come-from-behind victory, knocking off the Westchester Knicks, 125-118, to improve to 6-1.

Although San Antonio’s G-League affiliate has yet to genuinely dominate an opponent, with all six of their wins coming by eight or fewer points, Tre Jones has maintained his nightly individual excellence.

The rookie point guard scored 20 points, collected seven boards, and racked up nine assists on Saturday night. And near-triple-doubles are nothing new for Tre, who’s averaging almost 18-5-10 per game.

As for his fellow Austin Spurs assignee, Luka Samanic wasn’t as effective against Westchester. The second-year forward forced several ill-advised attempts on his way to 17 points, nine rebounds, and three assists.

Despite the lukewarm stat-line from Samanic, the former 19th overall pick aggressively sought out shots and exhibited some encouraging flashes of offensive versatility throughout the contest.

Both of San Antonio’s prospects have been spectacular for Austin thus far, and head coach Matt Nielsen had nothing but positive things to say postgame about their development since arriving in Orlando.

Given the seven-game sample size, it might be too early to anoint either player as the next great success story from San Antonio’s developmental system, though it’s impossible not to see an NBA future for the pair.

Luka Samanic has been superb in his second go-round in the G-League, but Saturday night saw arguably his worst performance of the season. The big man began the game out of rhythm, bricking his first shot on an awkward three-pointer near the left corner and missing a baby hook feet from the basket with the smaller Ignas Brazdeikis guarding him.

Samanic also had the ball stolen on a loose left-to-right crossover move and plucked on the ensuing possession as he attempted to back down Brazdeikis in the paint. Unfortunately, his early offensive woes carried over a bit to the defensive end as the Knicks took advantage of Luka ball-watching for a wide-open triple.

The second-year forward improved drastically in the second quarter, showing off impressive open court speed and handles for a player of his size. Still, Samanic seemingly shied away from contact, allowing Brazdeikis and Simisola Shittu to alter his shots on one end and plow through him on their way to the tin on the other.

Despite his lack of physicality in those aspects, Luka was active on the glass, finishing with a game-high nine rebounds. While he struggled to find a semblance of consistency, his body language never soured. He found other ways to stay engaged, including setting a few sturdy screens and getting his teammates involved with his passing.

The final frame showed Luka’s uncanny ability to get hot in a hurry as he tickled the twine with a pair of triples on consecutive possession that kept Austin ahead by four points with just minutes left in regulation. Though his shot selection was questionable at best, his effort never waned, and that is a telltale sign of maturity from the 21-year-old.

Much like Samanic, Tre Jones has been among the best players in the G-League. The rookie point guard averages a league-leading 9.7 assists per game while chipping in a solid 18.1 points per game as Austin approaches the halfway mark of their regular season schedule. And his 5.3 rebounds and 1.3 steals per game highlight his two-way acumen.

Jones also opened the game on the wrong foot, committing a couple of careless turnovers, telegraphing low-percentage passes mid-air, and playing uncharacteristically out of control. However, Tre settled down significantly by the end of the first quarter and finished the opening period with three assists.

One thing that immediately stood out was how Westchester opted to cover the Duke alumnus beyond the arc. The Knicks willingly left Jones open on the outside when he played off-ball and went under screens when he ran the pick-and-roll. They dared him to shoot, but Tre never took advantage of the space.

Despite his restricted range, the rookie knocked home a few smooth floaters and mid-range jumpers. And his ability to get to the rim at will and draw fouls speaks to his craftiness. Change of pace, tight ball-handling, and intelligent use of timing and angles could prove dangerous if he ever develops a three-point shot.

Tre has a knack for finding open teammates in the half-court or transition and occasionally flashes a proclivity for taking over tight contests. He put both of those skills on full display when it mattered most, registering ten points and three assists in the fourth quarter, and capping the game with an explosive one-handed jam.

The Austin Spurs return to the AdventHealth Arena at 6 PM CST for a date with the undefeated Delaware Blue Coats for the second leg of their back-to-back.