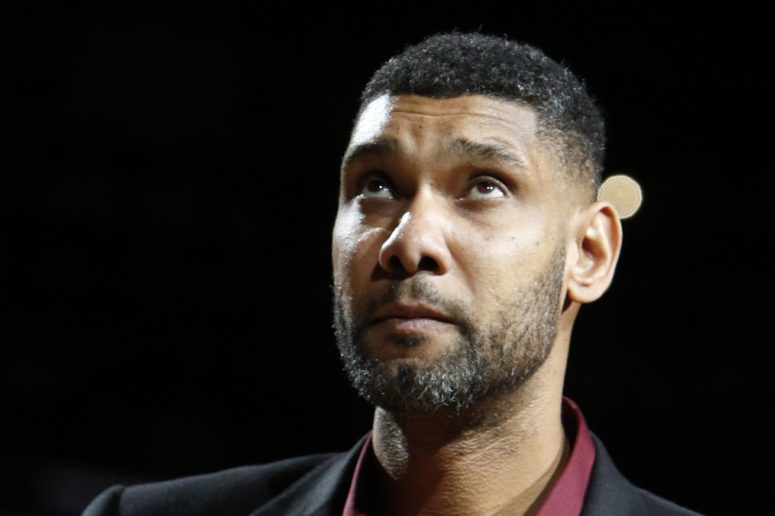 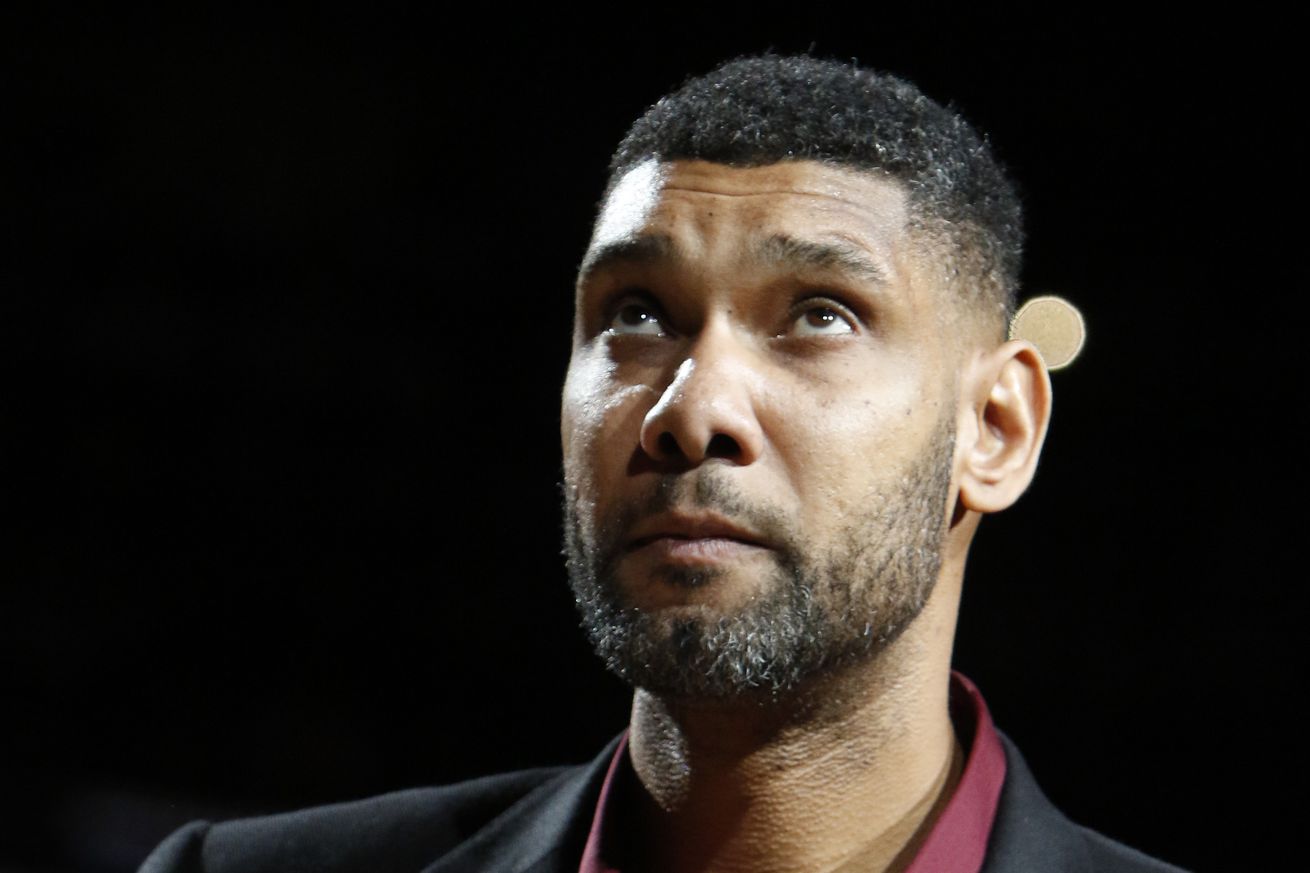 The final installment of the Hanging from the Rafters series, on the greatest Spur of all — Big Fun.

This series celebrates the numbers that have been retired by the Spurs. To date, there have been eight men whose impact on the culture of San Antonio has been so permanent that their personality and style of play is part of the Spurs lexicon. Each player is deserving for more than statistics, a game winning shot, or a championship. These are the numbers that swell in the hearts of the truest Spurs fans. No matter who else wore that number, the jersey in the rafters belongs to the legend who hung it there.

For previous articles on these Spurs Legends, visit Hanging from the Rafters.

To quantify Tim Duncan’s career with statistical data only serves to ahoe that The Big Fundamental is one of the greatest big men in NBA history, if not the greatest power forward of all time. For a Spurs fan, the discussion is moot. The real only ongoing debate that remains is Duncan’s legacy in comparison to players he never faced (Bill Russell, Kevin McHale, or Elvin Hayes) and whether his desire for privacy dulled his image relative to his flashier contemporaries (Kobe Bryant, LeBron James, and Chris Paul).

If you Google “best power forwards of all time,” Duncan tops every list by sports writers and journalists — but many of the players in the Top 10 (Dirk Nowitzki, Kevin Garnett, and Karl Malone) actually competed against Duncan. By comparison, Duncan bettered all of his foes. Play around in the Tim Duncan Comparisons to see just how Duncan measured up on a strictly player-to-player level in some of the most popular gauges. In particular, Duncan’s defensive statistics surpasses any comparable player, setting him aside from peers and forbears alike.

Comparisons aside, Tim Duncan’s impact on the sport of basketball was singular. The path that led a successful Spurs squad to earn the 1st draft pick in 1997 was the truest form of destiny, no matter how egregious the circumstance at the time. And was there ever a better pairing than Tim Duncan and Gregg Popovich, often called the greatest love story in all of sports.

Tim Duncan’s personality, mentality, and unwavering strength of character in an industry that makes most men too big for their britches was a perfect match for small market team with grit and integrity that needed a final piece to achieve greatness. Tim is that greatness, but not just in statistics or awards although there were plenty of accolades.

From his Rookie of the Year through all 5 Spurs Championships, from 15 All-Star Appearances to his 2015 NBA Teammate of the Year recognition, Duncan remains one of the most celebrated players in NBA history.

And still, what would have become of the Spurs had Tim Duncan never put the ball into his hands. Is Duncan’s impact of the sport of basketball not a “life imitating art” version of the butterfly effect stemming from Hurricane Hugo?

Without Duncan’s Olympic pool being demolished in the wreckage of Hurricane Hugo, Tim may have met his destiny as an Olympic gold medalist in swimming. The Spurs may have then drafted Keith Van Horn in the 1997 NBA Draft. A worthy player indeed, but Van Horn’s only NBA accolade is All- Rookie First Team. His career did not impact his teams (five in all) in the way Duncan’s did the Spurs.

Retiring #21 was in fact celebrating Duncan’s accomplishments on a Spurs level. It may seem passé when so many players on so many teams have their jerseys retired. But retiring Tim Duncan’s jersey was more than a gesture. It was announcement. It was the most bombastic spotlight with which to send off the NBA’s quietest hero. And Duncan was gracious enough to let San Antonio in on the celebration. Can anyone who watched the ceremony say it didn’t feel like family? The event was relaxed with very few speakers. At just under 40 minutes, there was little elaboration.

Tim Duncan’s greatest assets were sportsmanship, loyalty, and honesty. Translating these into athletics and combining them with superior basketball acumen elevated Duncan the player. Yet he was never above his team. He allowed himself to be coached. In doing so, everyone around him was coached. Popovich limited Tim’s minutes as his career lengthened. Or was his career lengthened because Pop limited Tim’s minutes? Pop sat Duncan during key games for injuries that may have seemed minor, but longevity was always in focus.

Rarely has the argument made that the Spurs are the best team because of 5 Championships. More often than not, Spurs fans are more consumed with the demeanor of its most notable players. David Robinson, Tim Duncan, Tony Parker, Manu Ginobili, and now Kawhi Leonard all leave their game on the court. They don’t use the media to air grievances. There is no chest thumping or finger-pointing. What is most common to hear about is the culture. Nowhere in the NBA has more been said about the culture of a team than has with the Spurs. And this method of team management stemmed from Gregg Popovich. Together with Tim Duncan as his leader, players got coached, teams got better, and the results were championships and consistency of prominence in an industry that more often than not seems short-sighted.

Media have rarely gotten more than a few words from the Spurs, and when they do, the comments are direct and on point. I’ve seen more interviews where Tim highlights a teammate’s contributions instead of his own. Opportunities to smear other players are not just deflected; they are usually defended. When Pop states “family business,” Spurs fans know. That is a San Antonio mentality. You won’t get that in any other market. It is what makes the Spurs unique; it is the core of the Spurs. And Tim Duncan was, is, and will always be a face of this franchise.

Only after a full season passed did I realize how much I missed Tim Duncan. His pregame routine of hanging from the rim, sky-hooking his warm-up gear, and cradling the ball at center court are now a memory.

I remember Tim pulling Manu into a headlock and kissing his head after a game-clincher. I saw him pull aside Ayers after a tough play and console. I relished in watching him fist-bump each team member and then leave the court last.

Most of all, I remember June 15, 2014- Tim’s arms outstretched embracing all of Spurs Nation and inviting everyone to celebrate in what he called “the sweetest” championship.

Duncan had more talent than most. He displayed a kind of innate leadership that cannot be taught. And at his core, Timmy was just a great guy.

In each of the pieces in Hanging From The Rafters, I have attempted to define what made the player of discussion Spursian. Inadvertently, I was comparing each player indirectly to Duncan. Duncan is the litmus test to which all players have and will be compared. How appropriate then is it to close out this series with Tim Duncan. He defined greatness. He defined basketball. And he defined the Spurs.

See, even his Career Highlights are selfless and team-oriented. How very Tim.

I hope you’ve enjoyed this retrospective of the retired Spurs as much as I’ve enjoyed researching and writing it. Thanks for all the shares and comments.

Throughout the season I’ll be writing about some of the most important numbers related to the Spurs. You know future rafter-hangers Ginobili and Parker will be featured, but you may be surprised at some of the numbers that keep popping up and making a difference for Spurs Nation.

NEXT UP: The numbers that won four titles.