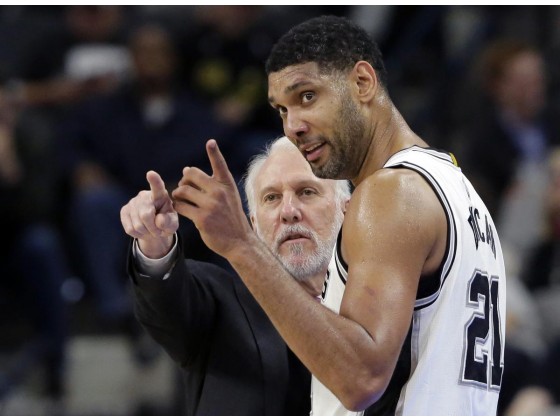 He played like nobody was watching and sometimes it seemed nobody was, except for the five times he would surface in June with a championship net. The world surrounded Tim Duncan but he kept it offshore, through 19 professional years and five NBA championships.

Few people knew Duncan. A high percentage of those knew him well. He did not hold a retirement news conference. Instead, he did an online conversation with Rashidi Clenance, his boyhood friend from the Virgin Islands, and the two punctuated it by laughing and fishing at a nearby lake.

When UC Irvine coach Russell Turner ran into Duncan this season, he also ran into Mark Blucas, an old Wake Forest teammate, hanging out from two decades ago. Ticketholders told the San Antonio Express-News about their memories, about watching Tony Parker try a trick shot right before every tipoff and daring Duncan to try the same one, as they both laughed. They talked of Duncan standing near the passageway after every final buzzer, giving every teammate a hand and a word.

Turner was a Wake Forest assistant coach, a fellow big man. His job was to toughen up the skinny fellow that Dave Odom had found on a St. Croix playground.

“I beat him up pretty good,” Turner said, “and he kept learning. That bank shot he has from the elbow, he didn’t have that when he came. But he had huge hands and great feet, and the best thing he had was the willingness to get better. You’d give him something new and he would work to get it down.”

Duncan did not score a point in his college debut, against Alaska-Anchorage. In the end Wake Forest was 97-31 with Duncan, and he became the first NCAA player to score 1,500 points with 1,000 rebounds, 400 blocks and 200 assists. He stayed four seasons and got a degree, as he had promised his mother……Read More