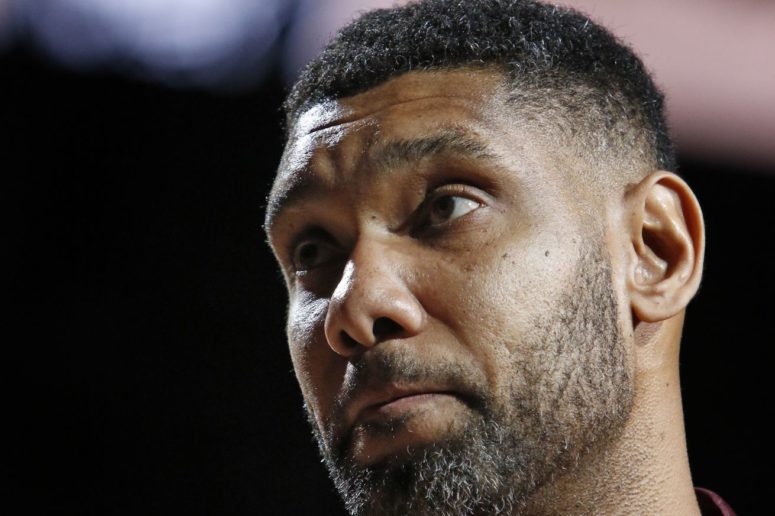 Big Fun spent some quality time with Bertans and Lauvergne at Wednesday’s practice.

The San Antonio Spurs’ commitment to developing players is a part of their DNA. And it’s well known is how the various leaders of the team generously give of their time to pass their knowledge on to their teammates. Wednesday’s practice was Tim Duncan’s latest appearance to Spurs practice facility and he started with some one-on-one time with Davis Bertans.

This photo gives me chills. Duncan appears to be helping Bertans with his post up play. Bertans hasn’t seen much of the floor, but his time spent with Timmy honing his skills should prove beneficial when he’s called on.

More from #Spurs practice… Bertans taking some lesson from Duncan and Monty… (Williams’ elbow on Tim looked like it hurt..lol) #Spurs pic.twitter.com/0nZDgA1V5F

The fact that Timmy has taken the time to come to practice with Bertans gives me hope that the Lativan will soon be making an appearance in the rotation. His three point prowess and size could prove to be an advantage for the Spurs as the season wears on.

Duncan and what appears to be assistant coach Ime Udoka also spent some time working with Joffrey Lauvergne, who looks almost ready to play after recovering from his sprained ankle. (We also see a nice fly-by of Matt Bonner who was also at practice.) It will be nice to get the athletic and energetic big man back in the rotation, and his time spent working out with Timmy should be evident as soon as he is playing again.

The scene at #Spurs practice… Joffrey Lauvergne getting some work in… again, hopes to return this week. Maybe Friday vs #Bucks pic.twitter.com/0347dXMejX

The Spurs have been working things out with their new guys and we have seen some ups and downs. Dejounte Murray, Brandon Paul, Rudy Gay, and even to some extent Kyle Anderson have spent significant minutes on the floor learning the Spurs “System” on the fly and have been making progress. Maybe with Bertans and Lauvergne, it was time to bring in one of the Jedi Masters in to offer some ancient wisdom and help practice some skills.