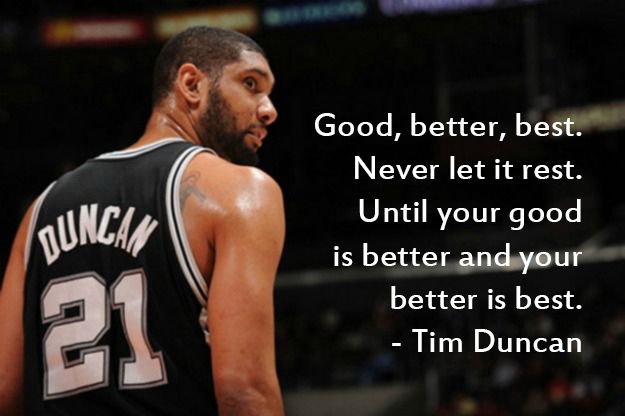 Circa 1997 the NBA was thrown upside down when a struggling Spurs team who finished 20-62 the season before. Defied the odds and managed to get the first pick of the 1997 NBA draft. This was the turning point for the future of the franchise and no one could have predicted the 5 NBA Championships that were to follow.

Tim Duncan was mentored by NBA great David Robinson when he arrived in San Antonio. The Chemistry between the two was clearly evident in this early interview by ESPN. These early years were going to shape Tim Duncan into the big fundamental we see today.

In the 1999 NBA lockout shortened season the Spurs struggled early on but managed to finish the season strong. The leadership skills of David Robinson and the fundamental no-nonsense approach to the game of Tim Duncan led San Antonio to its first NBA Championship in 1999.

By the 2003 season The Admiral David Robinson had passed the proverbial torch to Tim Duncan. This was for all intents and purposes Tim Duncan’s team and David Robinson’s last year in the NBA. Tim Duncan and the Spurs were determined to get the Admiral one last NBA Championship before sending him off into the sunset. The Spurs defeated the New Jersey Nets in game 6 of the 2003 NBA finals to win their 2nd NBA title.

In the years to follow Tim Duncan’s no non-sense approach to the game along with his drive and determination lead to 3 more NBA Championships. Tim Duncan united the fans and the city of San Antonio like on other athlete before him. We all breathed together our hearts beat together we cried and loved this game together. Now at the end we can all breathe together as once again the city, the fans and Tim Duncan will start a new chapter in Spurs history. This is not the end but a start of a new beginning with the stars like Kawhi Leonard and LaMarcus Aldridge the future for the Spurs looks as bright as ever.