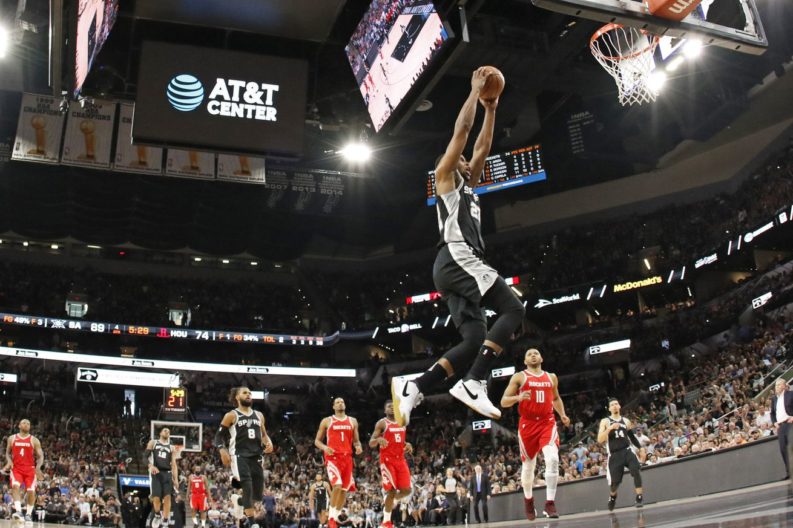 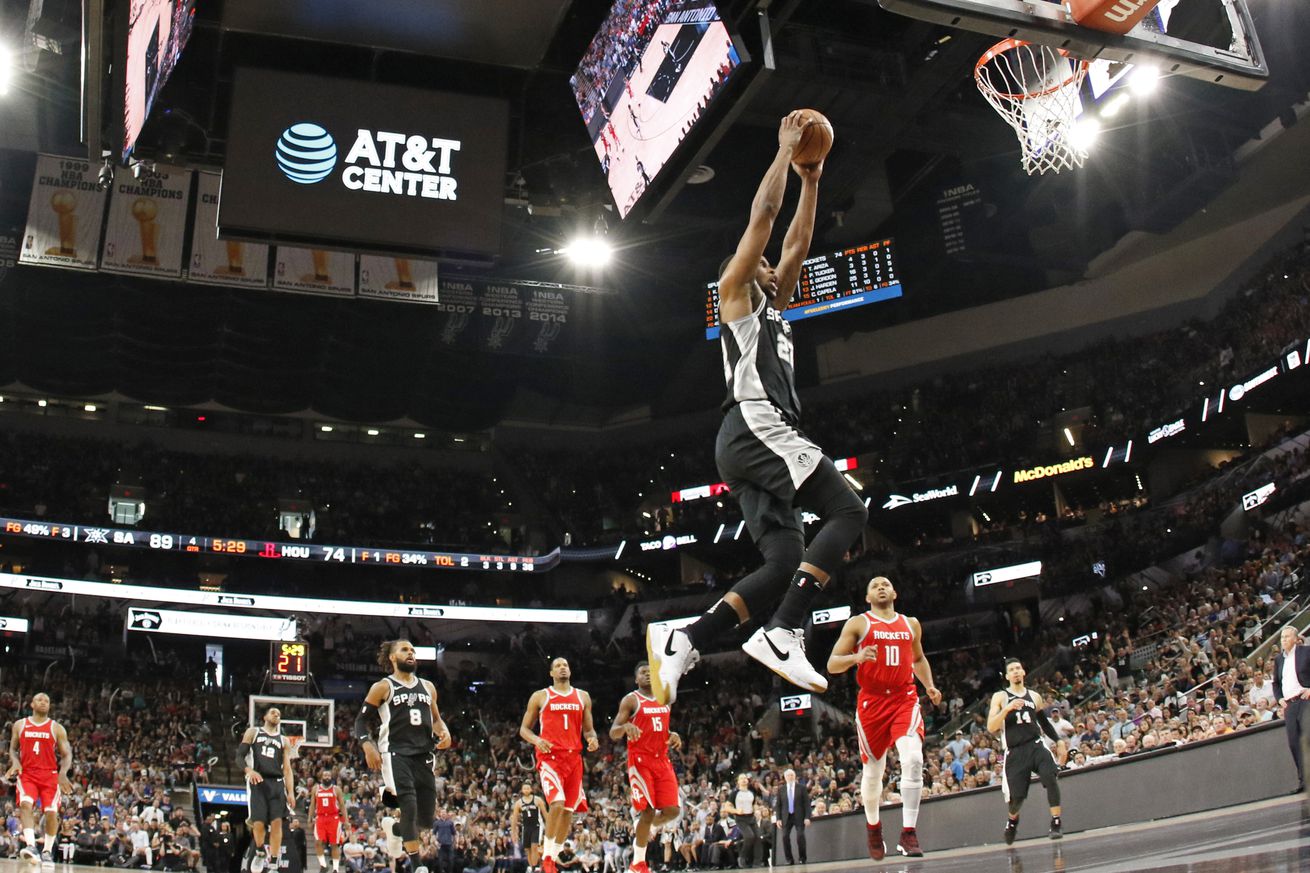 On April 1, 2018, the Spurs hosted the Rockets in San Antonio. The Spurs were fighting for their playoff lives, and the Rockets were on an 11-game win streak. The home team won the game in decisive fashion, and it ended up being critical as the season came down to the wire. It also highlighted some important strengths and weaknesses the Spurs are likely to lean on this season. In particular, late in the second quarter, there was a defense-to-offense sequence that may offer a foreshadowing of what’s to come.

The Spurs built a small lead, at 26-20 early in the second quarter, but the game had been a see-saw battle up to that point. The Rockets had the ball.

Eric Gordon brings the ball up just on the left side of the floor, and is picked up by Bryn Forbes. Tony Parker and Rudy Gay are in good defensive position, especially given who they’re guarding. Parker is on Ryan Anderson but shaded toward the ball handler slightly and looking directly at him. Gay is picking up Joe Johnson, but has his hips open toward the ball handler and is clearly ready to help on penetration, though he’s a long way away.

On the other side of the floor, Pau Gasol is out of position. He’s guarding Luc Mbah a Moute, and he’s way too close. Manu Ginobili doesn’t realize Gasol is so far out, otherwise he would’ve slid a half-step towards the center of the floor to deny the drive. However, Ginobili is guarding Gerald Green, who’s a threat to shoot the 3 and attack a poor closeout. Therefore, Ginobili can’t move far, but letting Gordon attack a back-pedaling Forbes at near full speed with no rim protection is worse.

There’s essentially a runway to the rim once Gordon blows past Forbes. That’s exactly what happens, and he goes by so fast that the drop in air pressure between them actually drags Forbes to the ground. Don’t @ me, it’s physics.

Fortunately for the Spurs, Gay is ready, and once Gordon gathers the ball, he realizes the runway is gone. Gordon either doesn’t see Johnson open in the corner, or is afraid that Parker has dropped low enough to threaten the passing lane, so he tries to flip a left-handed lay-up over the top. He doesn’t even get close. Gay tomahawks the ball out to the corner where it’s gathered by Mbah a Moute. The block was great, but this could have been a wasted opportunity. If Gay tips the ball to Gasol instead of spiking it out to the 3-point line, the Spurs have the ball right then and there. Possession over.

Instead, the Rockets have the ball with 16 seconds left on the shot clock. Plenty of time to run a play and still get some points.

The very next thing Mbah a Moute does is throw a lazy pass out to Green. Ginobili sees it coming and steps in the way. He secures the ball without falling out of bounds and tosses it to an already running Gay.

This is the linchpin of the play. You can see when Ginobili realizes the pass is coming and starts moving to pick it off. It’s a perfect example of how he was able to remain effective at 40 years old. His intuition, anticipation, timing and balance remained elite to the end. Since he’s apparently going to stick around like Timmy, hopefully some of that will rub off on the young guys.

After 16 years with Ginobili, Parker knows what’s coming and has gotten out ahead of the play, with Anderson as the only defender in position to defend the break. Gay doesn’t sprint down the court. He varies his speed, even subtly feinting at one point like he’s going to hold up. That’s enough for Johnson to let off the gas, leaving Anderson straddling the edge of the paint, splitting the difference between Parker and Gay. The Frenchman does a good job of staying wide enough that there’s still a passing lane, but close enough that he’s a threat.

Just before the 3-point line, Gay decides to take it all the way, and catches Anderson flat-footed and Johnson jogging. He throws down a very pretty tomahawk to complete a 4-point swing that momentarily threatens to blow the game open.

Re-watching the game really highlights how much Forbes can struggle on defense, and that was obvious on this play. On/off statistics for a single game are extremely noisy, but the Spurs were outscored by 9 points during the 12 minutes he played, and they outscored the Rockets by 26 points during the other 36 minutes. In this case, it’s an accurate encapsulation of his impact on the game. When his shot isn’t falling (0-4 on the night), and especially when he’s matched up against a strong, dynamic guard, like Gordon, Forbes can look nearly unplayable.

It should be relatively easy to avoid those types of match-ups for him this year. With Parker moving on to Charlotte, Patty Mills is the only player shorter than Forbes on the roster. The Spurs can protect both players a little more this year by pairing them primarily with Dejounte Murray, Derrick White, or Lonnie Walker IV.

At the other end of the spectrum, Gay looked like an All-Star all night long. He came off the bench to play the four-spot alongside LaMarcus Aldridge or Gasol, and he was great. He spaced the floor, made excellent reads and solid rotations, and attacked the right match-ups. He was a +20 on the night, shooting 9 of 13, with 3 rebounds, 2 steals, and the block on the play above. If this is the Gay the Spurs get night in and night out this season – and if he’s just now back to 100%, it might be – then whether he’s a starter this year or not, he’ll definitely be on the court in crunch time.