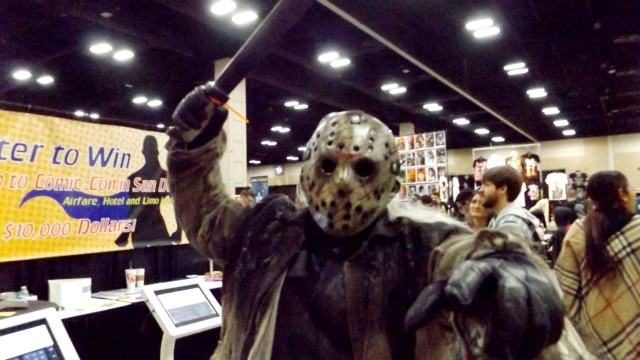 The Terror Expo debut in San Antonio was a terrifyingly good time as there is something to satisfy fans of the terror genre.  From vendors selling one of a kind T-shirts to original artwork and opportunities to meet celebrities this was the place to be in San Antonio. The Terror Expo had some supernatural royalty in attendance with such legends as Elvira Mistress of the Dark (Cassandra Peterson) along with Freddy Krueger (Robert Englund).  Fans were also treated to several celebrities from The Walking Dead TV series such as Gideon (Gabriel Stokes), Abraham ( Michael Cudlitz), Sam Anderson (Major Dodson), Alexandria Breckenridge (Jessie Anderson), Emily Kinney (Beth Greene), and Scott Wilson (Hershel Greene).  Besides the Celebrities in attendance many attendees dressed as their favorite movie heroes and villains. Some of the cos-play costumes were very elaborate as a DC villain trio made their way around the Terror Expo. You also had some costumes that were down right whimsical as a Minion Hell Boy was spotted walking the show floor. The success of this years debut of the Terror Expo will have fans anxiously anticipating it’s return next year.