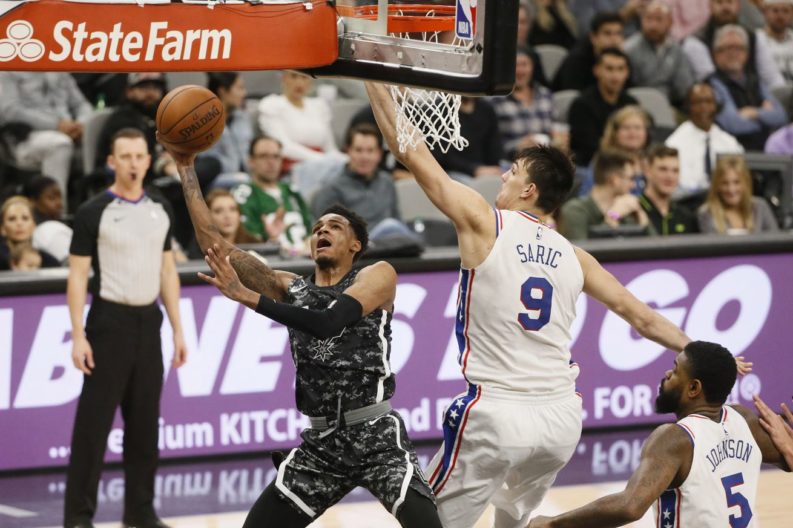 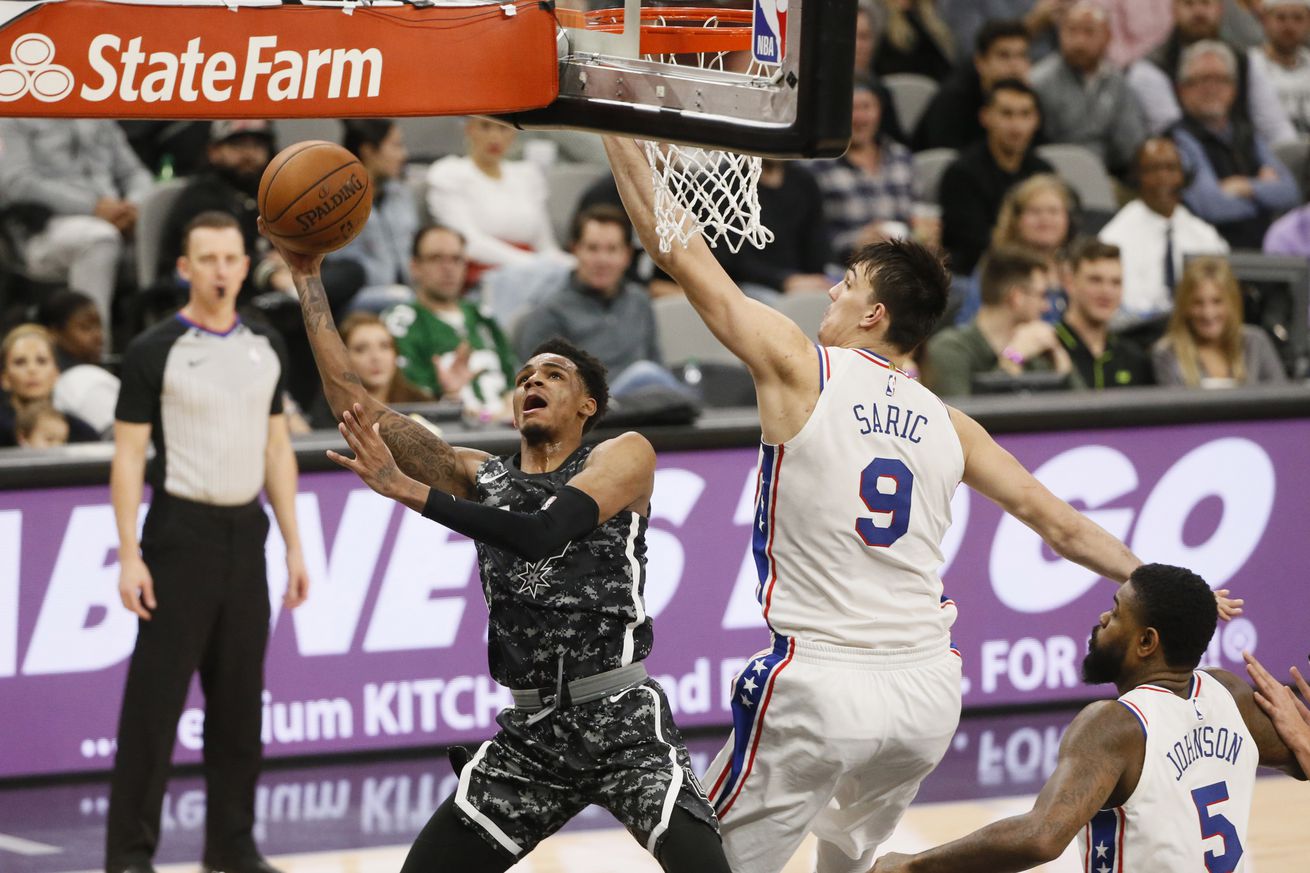 Murray at point is a work in progress, but there was plenty of blame to go around against Philly

Since Dejounte Murray replaced Tony Parker in the starting lineup last Sunday, I’ve been curious to see how San Antonio’s offense would look to start games. Even at 35-years-old, Parker remains the Spurs’ most dynamic and prolific playmaker, particularly in the half court. Per Second Spectrum data, Parker averages a team-high 10.4 drives per game, and shoots a blistering 53.7% on shots off those drives, one of the best marks in the league among high-volume drivers. Not only is he efficient on those shots, Parker also assists on more than 13% of his drives, the highest percentage on the team.

Murray has considerable upside and plenty of strengths, but they mostly manifest on the defensive end at this point. He is a non-threat shooting from the outside, and even when he gets to the basket, he struggles to convert. Murray ranks dead-last among the 79 players to attempt at least 150 shots in the restricted area this season, hitting on just 50.3% of those tries. Being such a limited offensive player can cause opponents to sag off of you, making it difficult to make plays for teammates, and stifling your team’s offense.

In San Antonio’s two previous wins with Murray starting at point, the Spurs were able to score with relative ease on the Cavaliers’ league-worst defense, and the average defense of the Grizzlies. Before tip-off, the telecast provided this graphic, showing that the Spurs have a 30-4 record when scoring at least 95 points this season:

But the Philadelphia 76ers boast the third-best defense in the league, behind only the Boston Celtics and, naturally, San Antonio. So, the offense figured to struggle coming into Friday night, which is exactly what it did — and then some. The Spurs finished with 78 points on 40% shooting, three made three-point field goals and 20 assists.

I was encouraged when Murray began the game with two nearly identical drive-and-dishes to Pau Gasol:

But, soon after the offense sputtered to the tune of 13 points in the first quarter and 18 points in the second quarter. By the time the first half ended, the Spurs had posted an offensive rating of 68.4 points per 100 possessions. The second half didn’t go much better. Some of that was poor execution, like this play coming out of a timeout:

Joel Embiid switches onto Murray very early in the play, but the Spurs are unable to exploit that advantage. Embiid is so unconcerned with Murray’s outside shot that he is even able to have a foot in the paint on LaMarcus Aldridge’s roll, causing LA to abandon it all together.

The Spurs were still able to generate decent looks, arguably even better ones than they normally do. The table below shows the Spurs’ shot allocation heading into Friday’s game versus the shots they took against Philadelphia:

Most notably, the Spurs took far fewer of their shots from mid-range, which, over the course of a season, often leads to a healthier, more efficient offense. In this one, though, even San Antonio’s best looks weren’t falling. Per NBA.com, the Spurs shot a shocking 0-of-13 on “wide open” threes (defined as the closest defender being 6+ feet from the shooter). Heading into the contest, the Spurs were averaging about 5-of-13 on wide open threes per game, so there’s 15 points right there.

One thing you hope for when replacing Parker with a dynamic athlete like Murray is the ability to get out in transition and get easy points that way. In the first half, however, San Antonio was outscored 12-0 in fast break points.

Scoring zero first-half fast break points is pathetic, but so is giving up 12 easy ones, especially considering that Philly averages fewer than 10 fast break points per game. A benefit of starting two bigs like Aldridge and Gasol is that you feel more capable of defending giant teams like the 76ers. But, those bigs are worth nothing to the defense if they can’t even get back in time to defend the rim. Take this Ben Simmons run-out, for example:

Overall, the Spurs gave up 27 shots at the rim, allowing Philadelphia to convert 18 of them, good for 66.7%. For comparison, San Antonio usually allows fewer than 24 shots at the rim per game, and allows opponents to score on 60.7% of those tries, a top-four league mark.

San Antonio’s defense was not at its best, allowing the 76ers to post an offensive rating of 114.2, which would be the best in the league this season. But, it was their offense’s inability to knock down shots, wide open or otherwise, that led to this blowout loss. This type of woeful shooting is not sustainable, but tracking this team’s offensive performance with Murray running the point will be a key area to watch going forward.