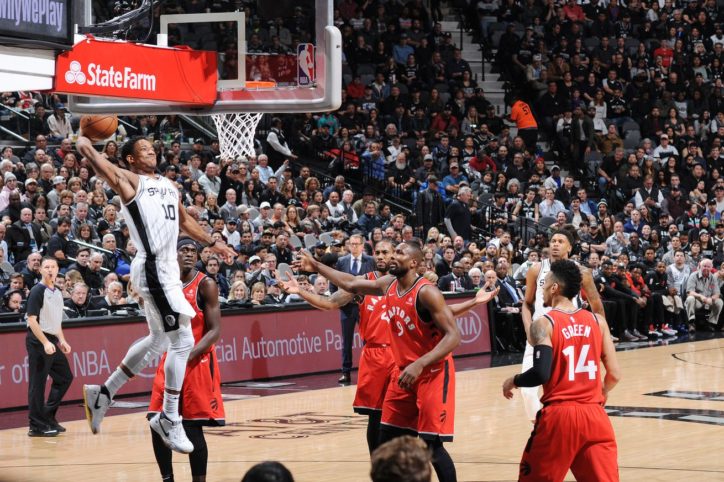 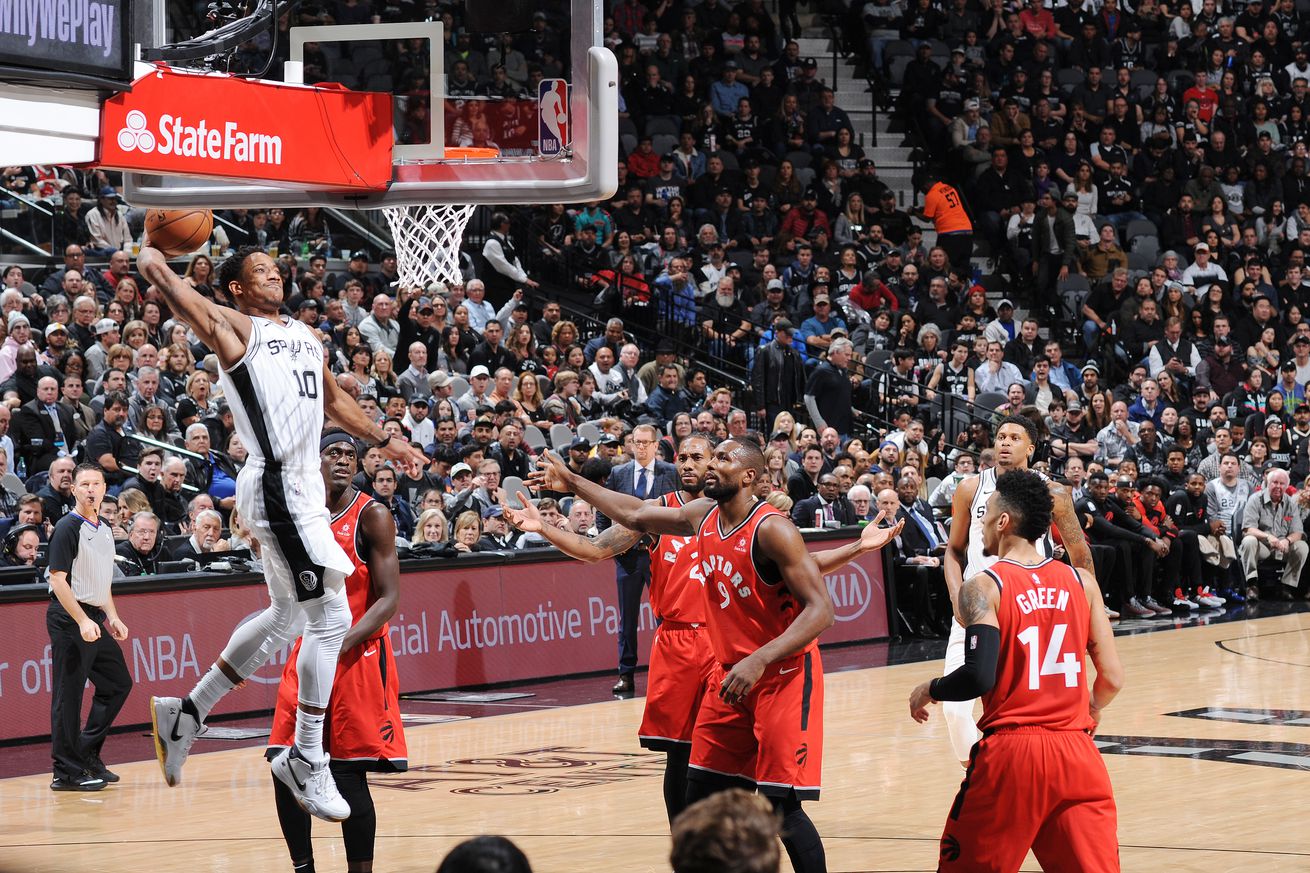 The Toronto Raptors’ tenth straight loss in San Antonio was different than your average regular season game. It carried the weight of a rare, pivotal, late-season game along with an emotional impact to fans approaching Game 5 of the 2014 Finals. There has already been plenty of coverage on the significant actors in this saga, so I wanted to put a spotlight on the other players and tidbits that made this such a satisfying January victory.

I’ve watched the first quarter highlights over a handful of times and it seemed like everything the Spurs did was right. There’s not much to add to it.

However, it wasn’t the quick timeout he usually does after an easy opponent basket, Pop lit into Marco Belinelli near the end of the first over shooting foul against Norman Powell and pointed at both of his temples. Think, Marco.

One particular sequence that led to the Spurs going up 45-19 hearkened to “The Beautiful Game” Spurs. Jakob Poeltl saved the ball on the left sideline directly to Patty Mills, who flung it to Davis Bertans at center court. Bertans then swung it to Marco, whom you could see directing Davis to send it his way, and then held onto the ball long enough to force the Toronto defender towards him. He then sent it to the right baseline to give Bryn Forbes enough time to line up his shot. The entire sequence took only six seconds from the initial Poeltl save to Forbes’ shot falling softly through the net. Not only a great example of “Good -> Better -> Best”, but just BEAUTIFUL to watch.

All around the world

Toronto went into a defensive zone with about 6:00 left in the period in order to trim the deficit. But the Spurs’ side-to-side ball movement initiated by DeRozan and Derrick White pushed the lead back over 20 near the end of the half. One could make a case that the Raptors’ two most effective players in the first half were Powell and Pascal Siakam.

Right as Chris Webber announced that there was “not much ball movement” coming from the Raptors during the Spurs 9-0 run to start the 3rd, Siakam chucked a brick into the backboard.

Kawhi looked thoroughly flummoxed several times as the lead got out of hand, but never as much as when he was called for a foul reaching in on White’s drive up the right baseline — responding with a loud “NOOOOOO!”

It was heartening to see DeRozan clinch his triple-double on a 10th assist via a behind-the-back pass to LaMarcus Aldridge for a 17 footer from the left wing. DeMar later went on to say during the post-game interview “I have great shooters around me,” when asked about his evening’s performance.

Kawhi unsuccessfully attempted to thread the needle to a post player partway through the fourth, resulting in the ball sailing out of bounds and yet again him looking to the referees for some intervention.

The Spurs were penalized with a 2nd technical for ‘Delay of Game’ while up 26. Can any of us remember the last time a second tech was handed out for such a violation?

White started and remained as the primary defender on Kawhi, which was impressive in itself, but he and the team’s collective effort rendered Leonard’s contributions (8-13 FG, 21 points, 5 assists, -22 plus/minus) the equivalent of so many empty calories.

In the first quarter, White’s inbound pass to DeRozan coming off of a double screen for a dunk put the Spurs up 15-5 was immediately followed by an alley-oop pass to Rudy Gay to make it 19-9.

Derrick had a side pick-and-roll sequence with Aldridge midway through the third, resulting in an Aldridge dunk. His low zero turnovers are an indicator of his burgeoning passing skills.

The sequence mentioned in the second quarter was one of numerous times where Jakob kept possessions alive or made it harder for Toronto to initiate their fast break. Later in the third, Poeltl wrested away yet another offensive rebound from three Toronto players leading to another Spurs possession and basket.

Poetl also had a nice give-and-go with Patty to start the fourth. He seems to do well as a valve for other teammates to play off of and through. Later on, yet another Jakob offensive rebound led to a series of passes to Bertans and Marco for a Forbes 3 to make it 105-82. This led my wife to ask: “Are they ever going to play Gasol again?”

Did you know that these two are the 3rd and 4th highest bench scorers in the league over the last six years? I didn’t either!

It was fun to see LW4 get some playing time and make the most of it with a 3 pointer above the break like Danny Green used to.

Danny had the type of ICY game (0-7 FG, 0-6 3-pt, -26 plus/minus along with well-documented misadventures in catch-and-shoot and dribbling into traffic situations) that would have had us vilifying him in the comments in previous years. However, the video tribute and his name leading the scoreboard marquee (“Thank You Danny and Kawhi”), and his emotional response while watching them during player introductions was really neat to see.

The Spurs reunion tour with former players continues Saturday against Kyle Anderson and the Memphis Grizzlies!