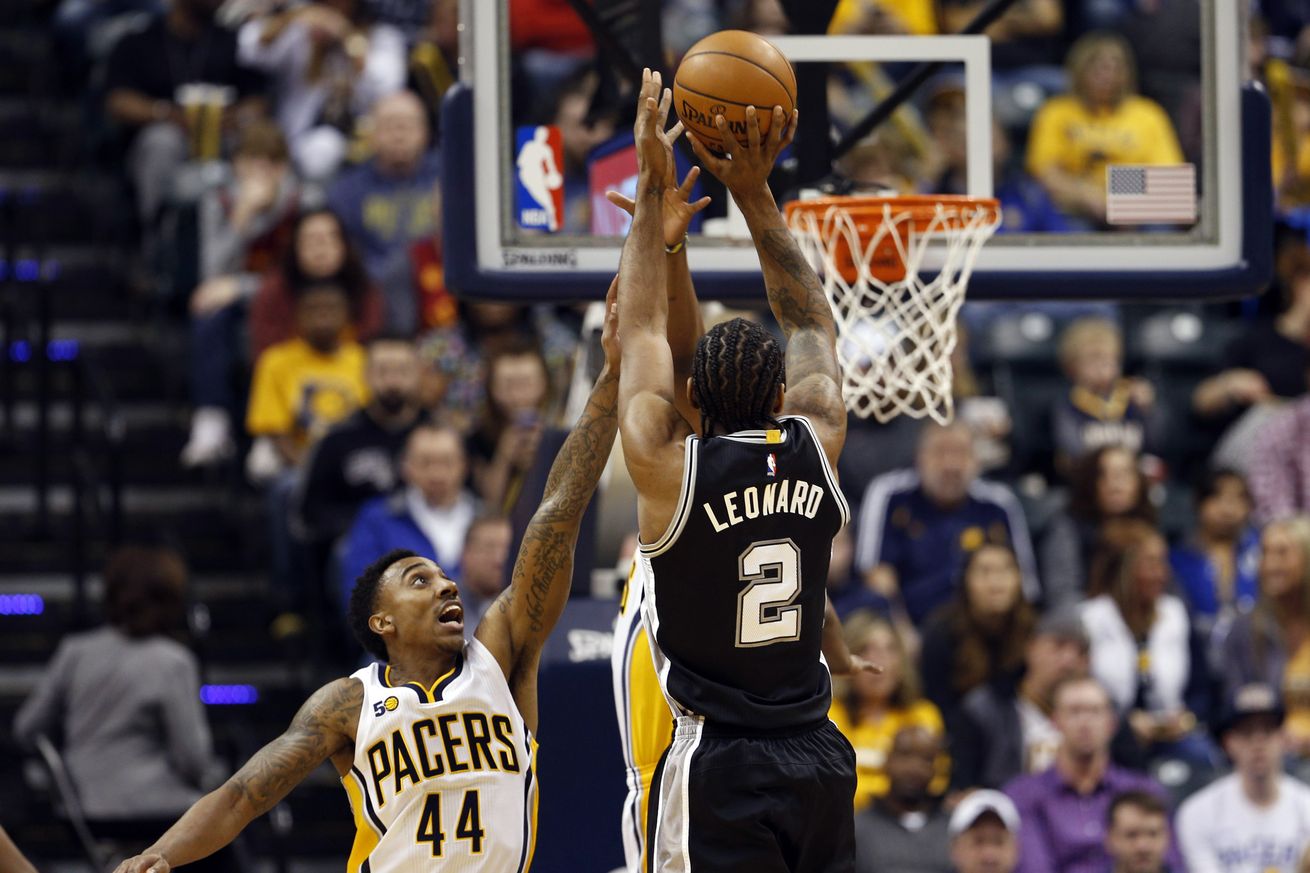 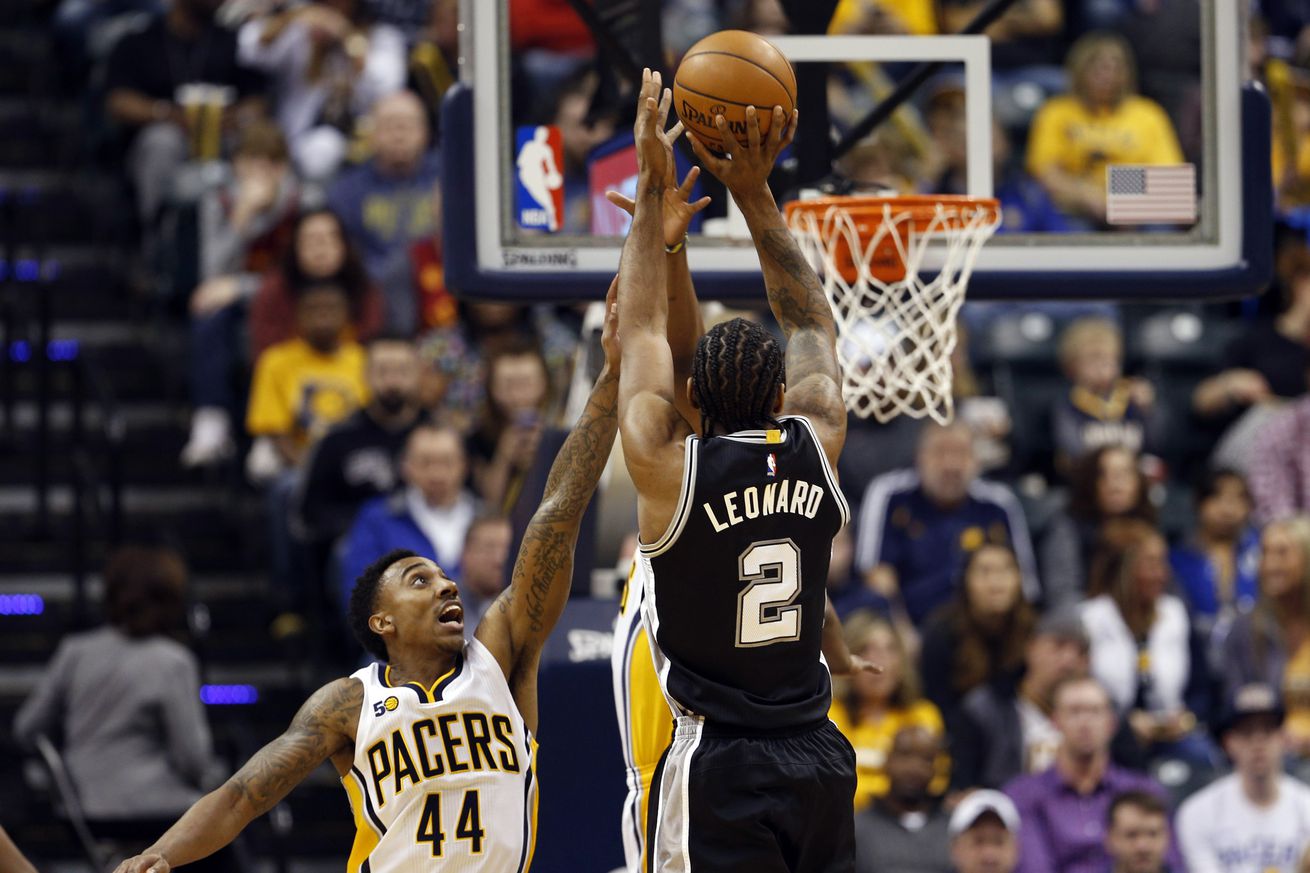 With the Pacers up one, the Spurs used a rub screen out of ‘4 Down’ to free Leonard for the go-ahead baseline jumper

If you’ve followed the Spurs through the Duncan years, you’re well aware of the 4 Down set. In short, a wing player got a rub screen from Duncan and popped out on the strong side. Parker passed the ball to the wing player and then cut to the opposite three point line. Duncan would use his leverage from the screen to pin his defender, and he would then receive the entry pass, wait for the passer to cut through and then go to work in the post. This action is out of the Motion Weak family, with the rub screen being the distinct difference.

(Here’s an example of what the end of the play looks like, run against the Celtics.)

The Spurs don’t have Tim Duncan anymore, but LaMarcus Aldridge’s post play has opened the doorway to use similar sets. We’ve seen wrinkles out of the 1-4 Flat (interchangeable with 4 Down) already this season to get looks for Aldridge.

Monday in Indiana, the Spurs used a variation of 4 Down to get Leonard a baseline jumper. This play gave the Spurs a one point lead en route to their 110-106 victory.

A twist on the old 4 Down play the Spurs used to run for Duncan, now used to spring #Kawhi for a baseline jumper. pic.twitter.com/Uol9NEb67x

While Green is a little slow to his spot, you see the Spurs line up with 4 players across the baseline and Parker at the top. Instead of simply running the screen between Leonard and Aldridge, there’s a wrinkle. Dedmon flashes up to the high post and receives the pass from Parker.

As soon as this happens, Parker cuts to the weak side corner and Green drifts up towards the wing. Simultaneously, Leonard cuts down through Aldridge. The rest of the play unfolds quickly. Leonard takes two hops in the lane and then spins back towards the baseline. Aldridge pushes off the shoulder of Turner and sets a convincing screen on George. Watch again from eight to ten seconds on the video and you’ll see the pick shoves George away from the basket, increasing the distance of his potential closeout on Leonard.

Dedmon, who does a great job sizing up Seraphin with a triple threat stance (notice him swing his elbows side to side), makes a good enough pass to Leonard who catches, rises and drills the jumper over George, who does a nice job sticking with the play and getting a hand up, but is too late after the Aldridge screen.

Dedmon does multiple things on this play. First, he sells his intent on getting a good low post position before planting hard to spring up to the high post for the pass. Then, he stays active with the ball which keeps Seraphin engaged; otherwise, Seraphin may have sagged off to force Dedmon (not an outside threat) to shoot. Bringing Seraphin away from the basket means there’s no weak side help in the paint (without completely abandoning shooters), which would have mattered if George got to Leonard sooner, forcing Kawhi to dump the ball into Aldridge on the low block.

It’s fair to ask why Turner didn’t jump out on Leonard, allowing George to stay with Aldridge. There are four reasons why:

Unfortunately, Leonard trails Russell Westbrook and James Harden in the MVP conversation as critics point to plays like this and say he’s good because of the system. That’s nonsense, and diminishes Leonard’s ability. It also takes a lot of basketball intelligence to execute these plays, and a commitment to doing so results in a lot of winning.

This play gave the Spurs the lead, and they got a nice bounce back win after losing in Madison Square Garden on Sunday.