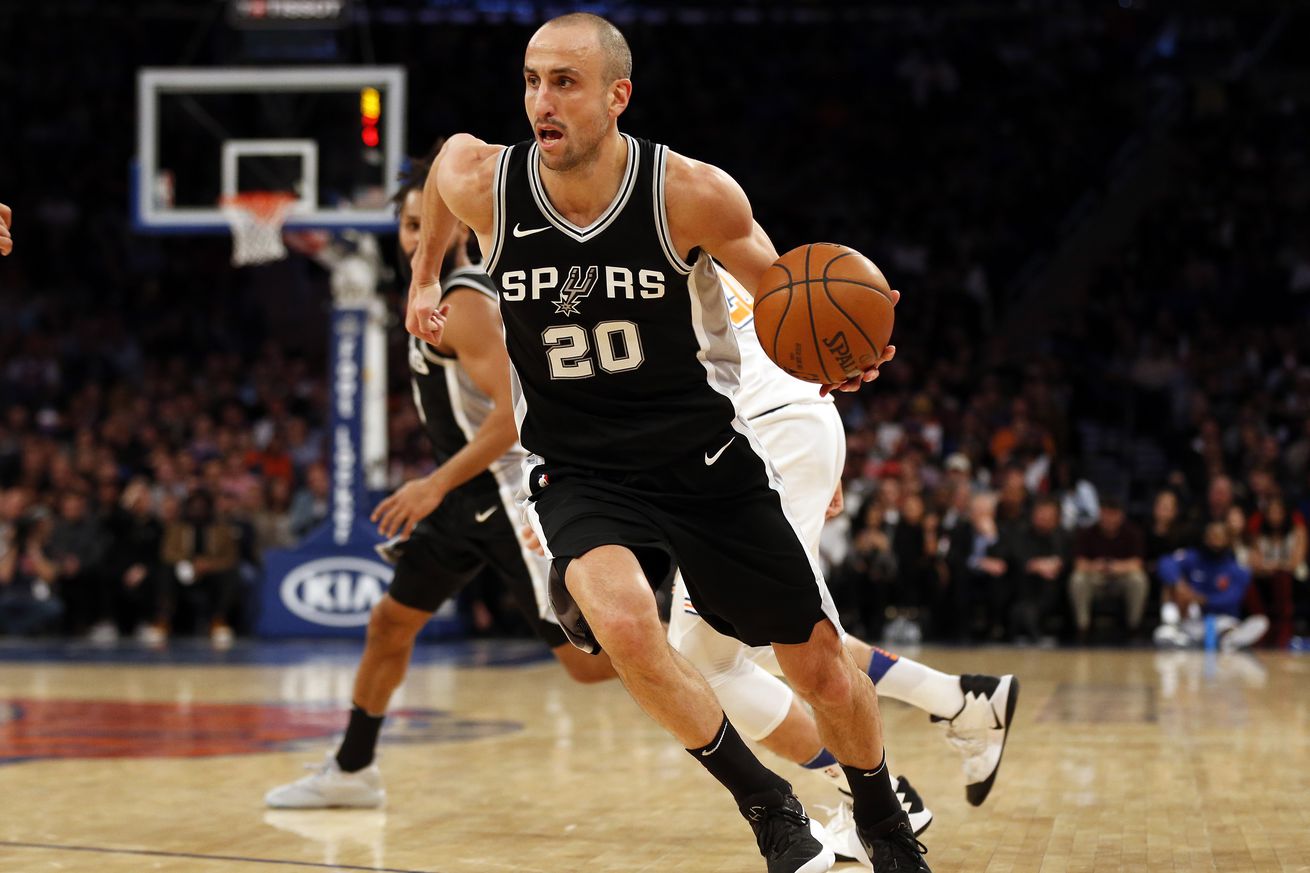 San Antonio’s game against the Knicks featured some things you don’t often see.

Manu Ginobili’s innate wizardry breeds magic on the basketball court. Throughout the years, Spurs supporters have gotten to watch him dazzle with body contortions, passes, spins and ideas that only he could create. His stubborn willingness to try new things coupled with his inner magician oftentimes leads to unexpected brilliance. On Tuesday night in a Spurs 100-91 win against the Knicks, Manu attempted a lob to LaMarcus Aldridge that swished through the basket, a good three pointer. The refs didn’t see it and even Pop (later) admitted he didn’t see the shot go in.

Michael Beasley, always toeing the line between greatness and buffoonery grabbed the ball as it came down and raced up court like it was a miss. The shot was unsettling, like a frame flash on a film reel that made you question whether you actually saw it or not. For a moment, it looked as if the refs wouldn’t or couldn’t review it, which would have made Bill Land’s head burst like an angry bubble on live television. Manu said after the game that he “went crazy” to the refs “because once you make a shot like that, you want it to count.”

The shot eventually was reviewed and called a made three pointer, giving the Spurs a 13 point lead. A margin they’d need after popping the trunk on the worst offense imaginable late in the fourth quarter. Manu’s insistence that he made the shot may have been the main reason the refs finally reviewed it — like someone relentlessly claiming they saw Sasquatch, their commitment causes you to eventually believe it might be true.

lolllll Manu Ginobili throws a pass that ends up going through hoop, refs have no idea, play continues like nothing happened.

Scores of Manu’s adoring Argentine disciples trekked to see their grand master in person at the historic Madison Square Garden. The fans serenaded Manu pre and post-game and he spent time giving the love back to them. Manu’s accidental three pointer will be a story they can remember forever and they were in person witnesses to the type of brilliance that only their hero can muster.

@manuginobili created a new thing: the PASS-KET . Does it count as a 3 and an assist ? #grampsjuice

The Passket! Good one Bobo! Anyways, I believe you (and LA) are underestimating me thinking that I meant to pass it. Been working on it for years.

Manu’s “passket” wasn’t the only shot from the Spurs that went in that had no business doing so. With the shot clock dwindling down in the second quarter, Kawhi got trapped near the top of the three point line and had to force a bad three. Luckily, he was just “passing to LA,” as LaMarcus swooped under the basket and laid the missed prayer in. Much talk has been made about whether these two can co-exist and the dark corners of Spurs web are calling for blood. Even though the play looks like a bad shot by Kawhi (and it was), lost in it was that both players were trying to get their teammate involved in the play before Kawhi’s Hail Mary.

Coming into the game the Spurs had a 2-4 record with Kawhi Leonard back and the offense seemed to be sputtering trying to re-integrate a player of Kawhi’s caliber, as Bruno Passos expertly covered. Most people think that Kawhi should be seamlessly slotted back into the band, like he was just a musician who got to the show late and just needs to pick up his instrument and fall in line.

But, re-integrating him is more like if Kawhi was the front man to an arena rock band and was really late to his concert, so the rest of the band, unwilling to play no set at all decided their best chance at pleasing the crowd was rhythmic jazz. So the band gets comfortable playing ryhtmic jazz together and the audience ends up liking it even though it’s not what they originally paid for. Kyle Anderson, Bryn Forbes and just about every member of the team has had a nice solo riff they wouldn’t have gotten otherwise. But then, Kawhi aka the front man shows up and says “it’s time to rock their faces off,” though he hasn’t been practicing and the band hasn’t been playing their old songs that follow the front man’s lead. It’s not exactly a transition without bumps in the road. It shouldn’t be lost that LaMarcus Aldridge finished with 29 points and dominated a game once again. It’s less about how Kawhi and LaMarcus fit together, but how guys like Danny Green, Anderson and Forbes will have to figure out how to make their mark in performance’s headlined by a signature star and Leonard will have to keep giving them chances to shine.

Kawhi’s stat line against the Knicks looks like the Kawhi of old, 25 points, 8 rebounds, 4 assists and 4 steals. He was his normal, swarming self on defense early in the game too. He picked up assists on great feeds to LaMarcus in a screen and roll play and found Davis Bertans for a wide open three off a crisp pass.

Kawhi using the left block for all sorts of good right now. Navigates and finds The LATVIANKD for 3 pic.twitter.com/Yvr6tZ37fJ

He blocked Courtney Lee, stripped Enes Kanter and had a Kawhi Daily Special all in the first half.

I like the games that Kawhi Leonard plays. Means I get to see plays like this. pic.twitter.com/8w84Idj1qa

But, this game wasn’t a carbon copy of the Kawhi we’re used to. The rust was plentiful as he started 0-5 from three in the first half and his jumper still looks like he doesn’t have his legs beneath him. Uma Thurman’s character in Kill Bill had to coax her big toe into wiggling after she’s been in a coma for years and similarly, Kawhi is having to force his way into muscle memory. With the Spurs return from injury management protocol not allowing Kawhi to play frequently, it’s almost as if every game is his first game back and his team’s first game back to adjust to him. There are a lot of stop-starts, but hopefully with Kawhi logging his highest minute total of the season against the Knicks (31), the speed governor is about to be removed.

Re-integrating him isn’t lost on his teammates. Kawhi finished the night shooting 3-8 from three, making his last three attempts. Where his forced three that LaMarcus saved represented the awkwardness of the current setup, this catch and shoot from an Aldridge post up is a sign of light on the horizon. Kawhi’s caught fire after the kick out from his big man and regained his sea legs from there.

1) DeJounte Murray sparked the Spurs third quarter run once again. This rebound and put back came days after Pop called him “the best rebounding guard he’s ever coached.”

DJ with an excellent effort to grab the offensive board and put it back. #BabyDriver pic.twitter.com/M5nE42t3Wc

2) In two games against LaMarcus Aldridge and Pau Gasol this week, Kristaps Porzingis has shot 11-35 from the field and was held to 15.5 points per game, nearly nine points behind his normal average.

3) Kawhi and LaMarcus shot 43 times combined. My worry isn’t those two getting their shots, but the supporting cast having enough chances to shoot themselves into rhythm. Kudos to Davis Bertans for taking advatange of the opportunity. 3-6 for 10 points.

5) Sean Elliott kept referencing a game in MSG in the 1995-1996 season where he intentionally missed a free throw, which led to a basket that sent the game into overtime. He schooled us all in how to properly miss a free throw on purpose. You have to miss it, to the side! Take notes Jason Kidd.

A wish: That these fans had the best sporting night of their lives, getting to meet their main man.

The Argentines in New York were going bonkers for Manu before the game tonight. pic.twitter.com/qKqxcisMKF

Translation: “A few lines to thank the beautiful band of delirious fans who came to Madison last night and they made me feel at home. Thank you!!

In case you cared: