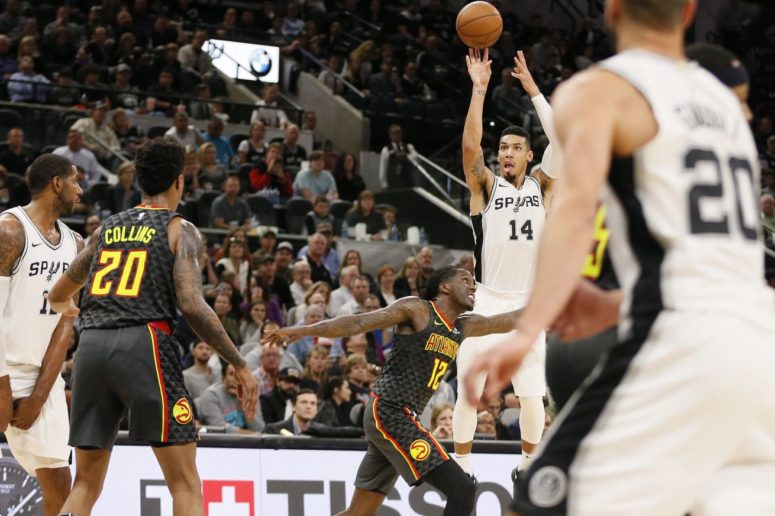 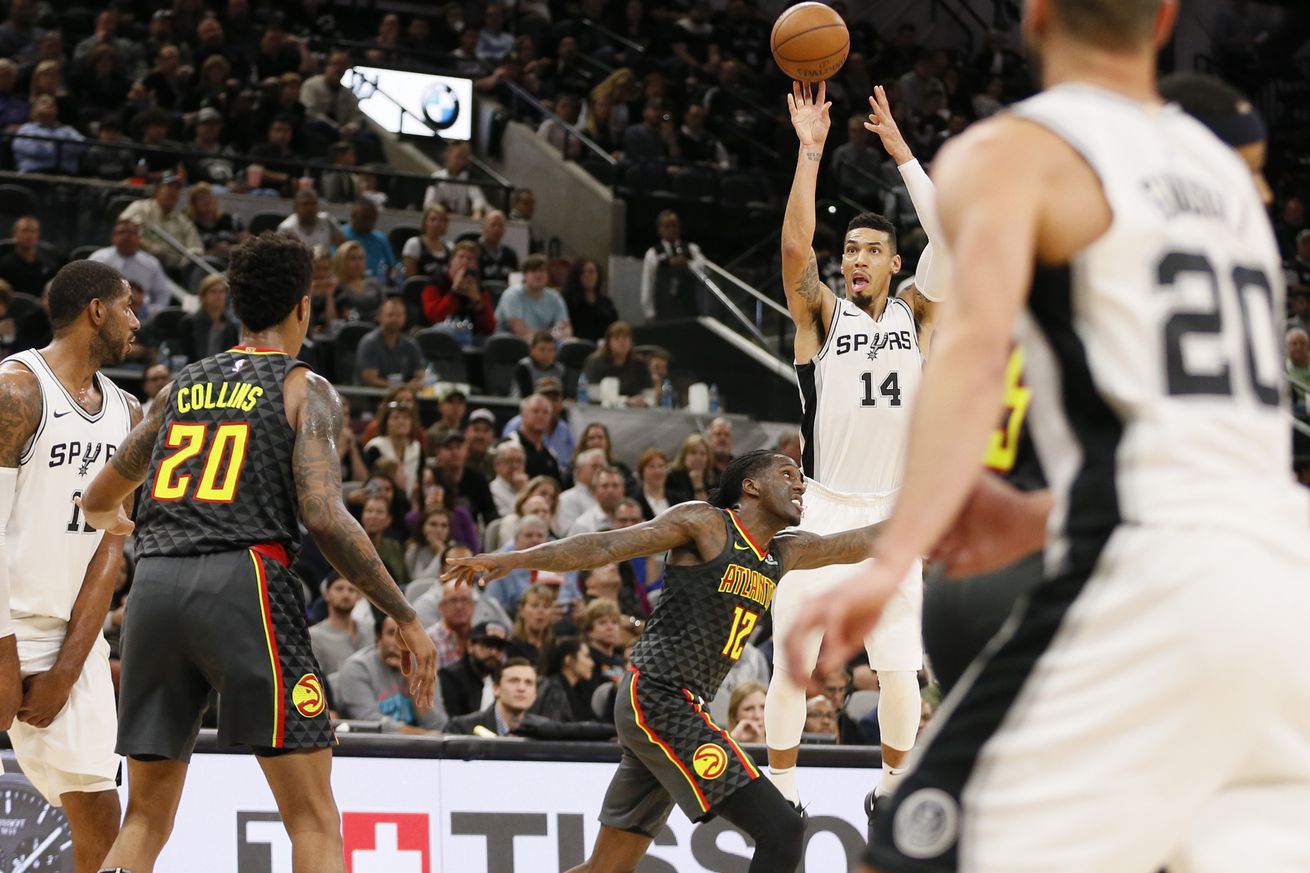 San Antonio displayed admirable commitment and tremendous chemistry coming out of a timeout against the Blazers.

One of the NBA’s most surprising storylines this season is the Trail Blazers’ fifth best defense. Given that Portland finished in the bottom third of the league in defensive rating in the past two seasons and didn’t alter its personnel significantly in the summer, there isn’t an obvious explanation for the sudden improvement.

On Wednesday night, the Spurs got a glimpse of some of the reasons for Portland is flexing its defensive muscle. Although the Blazers’ usually solid offense has started slowly to offset the progress they have made on the other end of the court, their cohesiveness and effort have improved in their own end, and Jusuf Nurkic’s presence in the middle makes a big difference for the small ball lineups Terry Stotts puts around him.

So, with Tony Parker and Kawhi Leonard out, what could the Spurs do against a solid defensive team that has length and athleticism at all positions? Well, aside from the taking advantage of their unique twin towers outlook — the duo of LaMarcus Aldridge and Pau Gasol finished with a combined 42 points, 25 rebounds, 6 assists and 5 blocks — the answer is execution.

There are a ton of options on this ATO. Even when the ball is fumbled, it doesn’t end the chances for a high-percentage shot. pic.twitter.com/ZC06y6SLML

Few possessions showcased the grind-it-out, step-by-step nature of San Antonio’s impressive road victory than this out of timeout beauty early in the third quarter. Whereas most eye-catching ATOs captivate by forging a path for a high-altitude finish or by producing immediate breakdown in the defense, this play stuck out because of its comprehensive and variable nature.

San Antonio’s primary intention on this play takes a few seconds to reveal itself. Forbes’ inbound pass to Murray is the prologue for the more important maneuvers, which begin when Murray tosses it back to Forbes on the wing and cuts off of Pau Gasol’s backscreen at the elbow.

The goal here is for the Spurs to get Nurkic away from the rim, which they accomplish by getting Gasol to set his screen high while Murray’s decoy cut peters out and he fades to the corner. Nurkic does a good job denying Murray any hope of a gimme basket and does well to shift quickly back to Gasol, getting to him just in time to deflect Forbes’ pass.

Without knowing it, Nurkic’s deflection effectively nullified San Antonio’s first option. If you go back to the instant Nurkic deflected the pass, ignore the ball and focus on the scenery in the background. Forbes’ pass to Gasol is a trigger for Aldridge to put his shoulder in his man — the undersized but long Al-Farouq Aminu — and drive him deep into the paint for a postup. Although Aldridge was able to gain access to the prime real estate and had Aminu pinned to his backside hip, Nurkic had taken Gasol out of position to make the entry pass.

Against most teams, Nurkic’s disruption probably would have forced the opponent to hit the reset button on the play. In today’s NBA, big men might have more advanced perimeter skills than ever before, but most seven footers who get stuck with the ball five feet behind the three-point line are going to instinctively look for the point guard and have him figure out the what to do next.

But Gasol is not like most seven footers, and even with Nurkic continuing to breathe down his neck, he gathers control of the ball and recalculates to find the quickest route for this play’s intended destination (Aldridge down low), like your Garmin when you miss your highway exit because your kids are making too much noise in the back seat.

Watch Gasol just after he flicks the ball to Danny Green on the left wing. Immediately after he makes the pass, he instructs Green to look toward Aldridge, who had repositioned himself from the middle of the paint to the left block. But with Evan Turner applying a rather aggressive closeout, Green doesn’t wait around for Aldridge to get a perfect seal on Aminu, and instead puts the ball on the floor, driving right at the space Aldridge just vacated.

The subtle interchange is almost too clever to be planned, and it requires a multi-talented big like Aldridge who is equally a threat on the block and from beyond the arc. When Green put the ball on the floor, he presents no realistic threat to score based on the positioning of Portland’s defenders, but the mere thought of penetrating inside the arc is enough to force Portland into a series of rotations that will eventually cause its defense to unravel.

With Turner on his hip and Aminu protecting the baseline, Green makes the simple pass back to Aldridge on the outside; that pass draws the attention of Nurkic, who shifts a step in Aldridge’s direction to discourage the mid-range jumper; that step opens up the passing lane from Aldridge to Gasol at the top of the key, which leads to Gasol catching and turning into a dribble hand-off with Forbes.

Because C.J. McCollum goes over the screen, Nurkic has to contain Forbes’ drive, but can’t get out to the free throw line to prevent the pull-up jumper without risking a drop off pass to the rolling Gasol on the backside. Thus, Turner, making perhaps Portland’s only mistake of this entire possession, pops in from the wing to completely shut off Forbes, leaving Green wide open from deep on the left wing.

Turner’s decision makes little sense conceptually — in this era, making a team use 19 seconds of the shot clock to get an off-the-dribble midrange shot for a second-year guard seems like a win for the defense — and even less sense contextually. By the time Turner gets to Forbes, McCollum has already recovered into a decent enough position to contest a pull-up shot from behind, and even if Forbes was able to get it off cleanly, it would have been a far less desirable shot than the one Green eventually gets.

In a funny way, this play should make you appreciate how good the Spurs’ defense has been during the past two decades, because it highlights just how fickle defensive success can be in this league. For 90 percent of this possession, Portland’s defense moved on a string, acted with singular intention and covered San Antonio’s first, second, third and fourth options expertly. But it was all for naught because of a split-second decision from a singular cog in the machine.

And, of course, this play also showcases how meticulous and persistent the Spurs are offensively. The poise they showed when the initial action broke down and the collective intelligence that was on display as they shifted from one lane to the next is so typically brilliant for this team.

The sign of a good team is a painless transition from Plan A to Plan B. The sign of a great team is the innate understanding of how to counteract a defense’s tactics and tendencies, to be simultaneously proactive and reactive.

The sign of the Spurs is how they make their fifth option, which might not have even been included in the instruction manual, look like that was the goal all along.