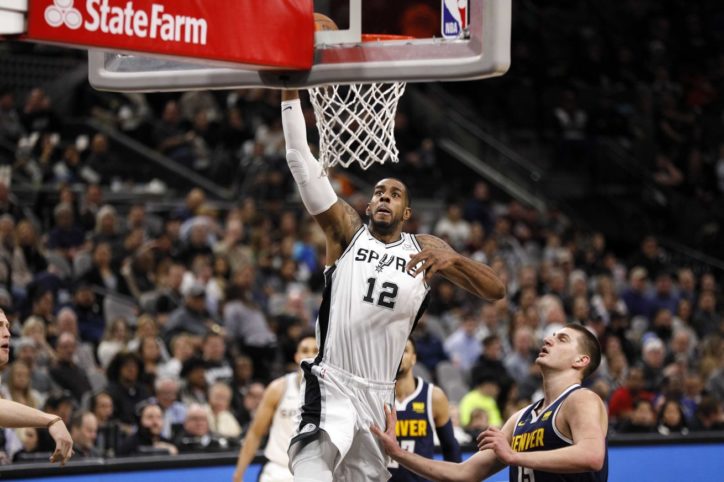 The key to a potential upset is for the Spurs to exploit Jokic’s defensive weakness more than he punishes them on the other end.

For a team that won 54 games, the Nuggets sure have a lot of doubters. No one seemed to fear them going into the playoffs and I think it’s safe to say that the Spurs are likely happy that they face Denver and not the Warriors or the Rockets. Despite ranking in the top 10 on both defensive and offensive efficiency, the Nuggets just don’t feel like a juggernaut.

It all comes down to their über talented centerpiece. Nikola Jokic is the most gifted center in the league, but he’s also inexperienced, moody and exploitable on defense. When he’s on his game, he’s easily the best player in the series, but unlike the less unique but steadier Spurs stars, his impact fluctuates wildly.

It’s the fragility that plagues Denver’s centerpiece that San Antonio will have to target in order to pull off the upset. It won’t be easy, but if the Spurs can frustrate Jokic and make him a liability, at least for stretches, they can unravel the Nuggets’ foundation.

On offense Jokic is undoubtedly a superstar. The Spurs can try to play him close to negate his passing or lay off him to make him a scorer, but it won’t matter. He’ll make his mark on that end one way or the other. He’s that good and Michael Malone has figured out how to use him. His teammates know how to play off of him to perfection. He’s going to hurt San Antonio on offense. The key to lessening Jokic’s impact will be to expose him on the other end. Jokic tries on defense, which is often enough to hide the fact that he’s simply not well suited to be an anchor. He has quick hands and can occasionally channel his ability to see plays unfolding before they happen to be at the point of attack, but his lateral movement and rim protection ability are mediocre. He can be exploited.

But it won’t be easy. After Jokic struggled mightily on drop coverage while defending pick and rolls last season, the Nuggets changed the way they use him. This year he’s been playing up, showing at the level of the screen to disrupt the ball handler instead of dropping back and giving opponents open shots or a runway to attack him. It’s been a successful strategy. Jokic gets to use his hands more on the perimeter, instead of being the last line of defense. He’s contested fewer shots in general, especially close to the rim, but more three-pointers. Opponents are actually slightly underperforming their expected shooting percentage when he’s the closest defender, which is massive improvement over last season. While Denver has still been better on defense with Jokic off the court, they have been decent with him playing as well, which is all they need since he’s such a transcendent offensive talent.

However playing Jokic up has its drawbacks. He is simply not quick enough to show in the pick and roll, blow it up, and recover. Having him so far from the rim forces the rest of the team to be on the move constantly, rotating in anticipation for passes to the roll man. As a result of using weakside defenders to tag dive men and offer rim protection, the Nuggets often fail to defend the corners. They have allowed the biggest share of three-pointers from those areas in the league, which negates some of the great work they’ve done preventing and contesting outside shots from above the break. Those issues are there even when the scheme works. Sometimes it just doesn’t, either because Jokic can’t contain ball handlers at the point of attack for long enough to allow the primary defender to recover, or because rotations come late. When either happens, Denver surrenders shots at the rim.

Aggressive schemes like Denver’s can be disruptive, but they are also tricky to implement for long stretches. Since many players are involved, any mistake creates a chain reaction that can result in an open shot. The Spurs will need to put constant pressure on Denver, and especially Jokic, to chip away at their confidence and force them into mistakes. San Antonio isn’t a nightmare matchup for the Nuggets like the always-in-motion Warriors or the pick-and-roll-heavy Rockets, but they have to tools to pull it off.

Derrick White and DeMar DeRozan are good pick and roll players who can use their quickness to make the defense collapse or make simple reads and find a roll man. Jakob Poeltl is relentless when it comes to diving to the rim, even if he doesn’t have a great short roll game yet, so he could give Denver’s interior defense some trouble. LaMarcus Aldridge is an extremely tough cover for the Nuggets because he can pop after screening but can also roll and establish position in the post when a shorter help defender switches onto him. He can also simply attack Jokic in the post, which could come in handy if Denver’s center gets in foul trouble.

The Spurs also have the type of explosive shooters that can punish the Nuggets for not rotating in time. If the pick and roll attack is on point and DeRozan and Aldridge can draw help defenders when they post up or isolate, the Spurs marksmen should have plenty of opportunities to rain threes. Patty Mills, Marco Belinelli, Bryn Forbes and Davis Bertans only need a sliver of space to hit their outside looks. They all also know how to move without the ball, which could result in open shots at the rim after cuts. They will be open. The ball handlers will just need to find them.

The key for San Antonio will be to remain aggressive without rushing. The Nuggets’ defense only works if the pressure up top makes ball handlers hesitate or try to force passes. The more the ball moves, the likelier a breakdown becomes. Whenever there’s an opening, they’ll need to make Denver pay. If they can victimize Jokic, not only will they score at will, they’ll also have a chance to disrupt the Nuggets’ rhythm and eventually chip away at their confidence. Jokic can get down on himself and either foul in frustration or show poor body language that can affect his teammates. His emotions can get the better of him at times. That’s where his youth and inexperience shows and it’s one of the reasons why, if the Spurs punch Denver in the mouth in one of the first two games, they could take control of the series.

Again, it won’t be easy. Jokic has said the right things leading up to the playoffs and could be focused and ready to lead his team even through adversity. The scheme has worked well enough throughout the year to the point of being somewhat reliable, so expecting the Nuggets to beat themselves would be foolish. Despite the above criticisms about their ability to defend, they at least have an established identity — while the Spurs have had to tweak their schemes throughout the season because nothing they tried worked for very long. The Nuggets know that and have the tools to dismantle San Antonio on offense, which would negate any good work the Silver and Black’s attack can do. Denver is the favorite and for good reason. No one should be shocked if they run through the Spurs without too much effort.

It will be on San Antonio to prevent that from happening. To do so, the Spurs will have to be the aggressors and target the Nuggets’ weaknesses relentlessly in hopes of forcing their young, inexperienced opponent to unravel. If they can pull that off, an upset is possible.