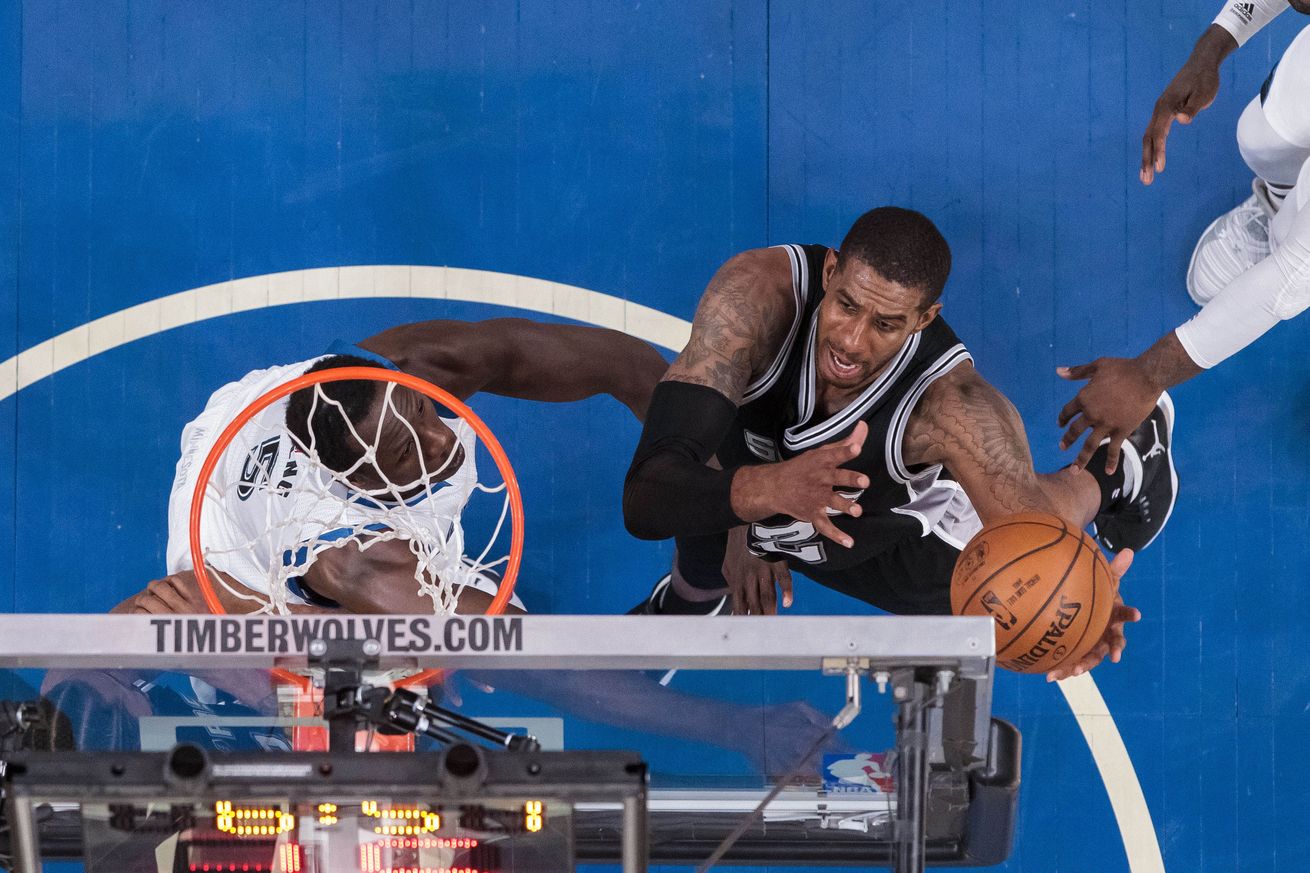 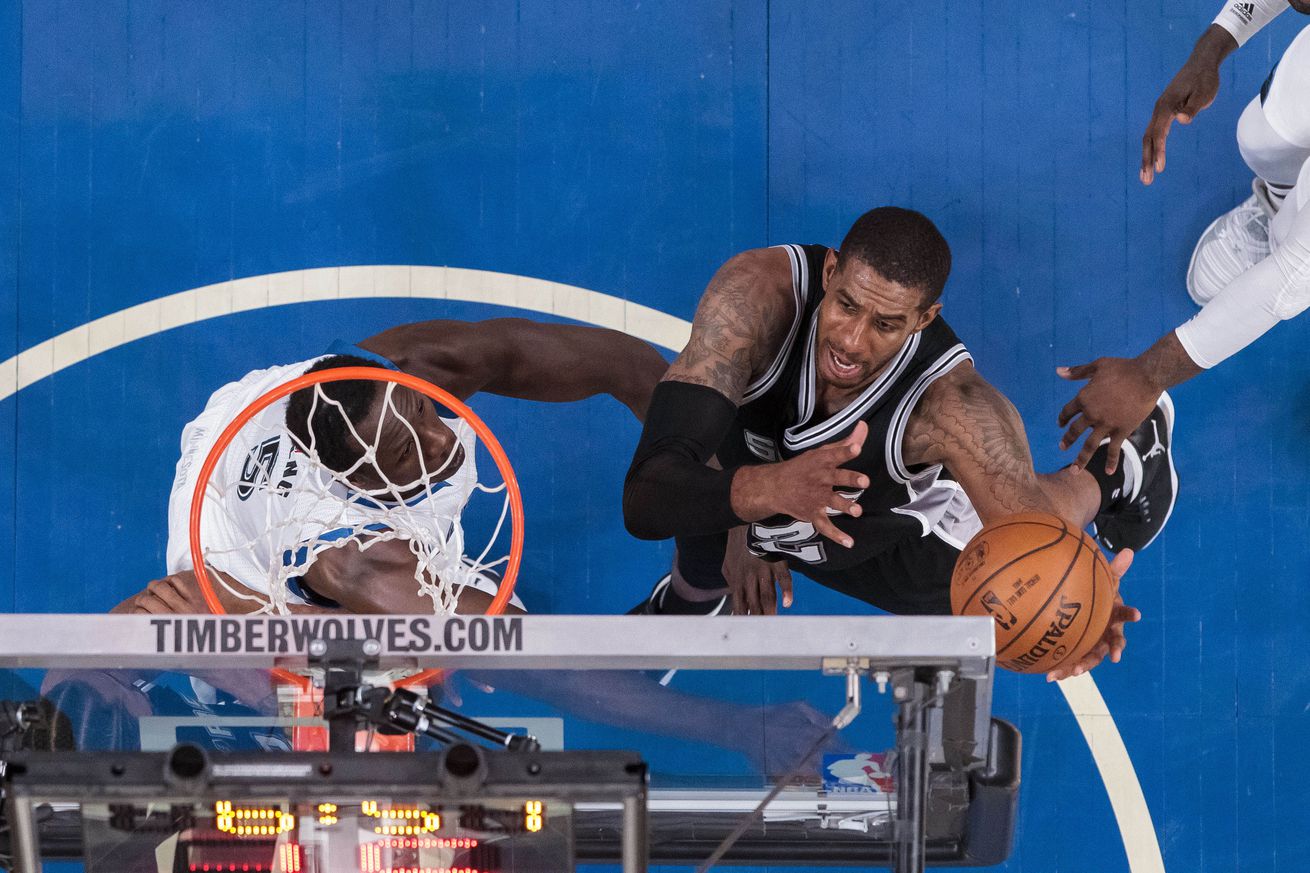 If the Spurs need one score from one play, which five guys should be on the floor?

After beating the Warriors on March 11th and claiming first place in the West, the Spurs dropped games to Portland and Memphis and quickly returned to second place. Prior to the Kevin Durant injury, the Spurs never expected to get the one seed as the Warriors were on cruise control. Had Durant stayed healthy, the Warriors don’t lose five of seven games, and the Spurs would have been content resting and getting ready for the playoffs as the two seed.

But now, with 12 games left, including one head-to-head matchup with Golden State, the Spurs have to decide if they will go all-out to make up two games in the loss column. If Durant isn’t himself upon return, the Spurs or Rockets could challenge the Warriors, even without home court advantage. But against a healthy Durant, not only would getting the extra home game as the one seed matter, it would allow the Spurs to avoid a grueling first round series against the Grizzlies, Thunder, Clippers or Jazz, followed by a second round tilt against a dangerous Houston team.

The Spurs and coach Gregg Popovich might play coy, but the Spurs know how difficult a road it would be as the two seed. Get the one, and you play a sub-500 team and then a more manageable opponent than the Rockets. And so, down 93-92 Tuesday night to the Timberwolves, a team desperate to break their losing streak to the Spurs and stay alive in the playoff race, the Spurs rattled off an 8-0 run to win 100-93.

With all the injuries and rest, the Spurs have juggled their rotation all year, causing a central question to emerge: with the season on the line, which five guys will be on the floor? Will Popovich stay big and play a combination of Pau Gasol, LaMarcus Aldridge and Dewayne Dedmon with three guards? Has David Lee earned a chance in a big moment? Will the Spurs finally unleash the small ball lineup of Patty Mills, Manu Ginobili, Danny Green, Kawhi Leonard and Aldridge? Will Mills actually get crunch time minutes over Parker in the playoffs?

A lot has to do with match-ups, but early in the game Tuesday, the Spurs went with a lineup of Mills, Ginobili, Leonard, Gasol and Aldridge that was intriguing. To preface, these five have played 70 minutes together and have a net rating of -15.4. It’s been one of their absolute worst defensive lineups, which isn’t too surprising with Dedmon and Green on the bench.

But in crunch time against the Thunder in last year’s playoffs, the Spurs ran out of offensive options. If Green isn’t not making shots, he’s limited. Dedmon, against a good defensive team, will get ignored and teams might double guards off the pick and roll. Parker is like Forrest Gump’s box of chocolates at this point — you never know what you’re going to get. Play this offensive group for big minutes and they get blitzed on the defensive end, but in small spurts, it’s hard to defend a lineup where all five players are offensive threats. Mills, Ginobili, Leonard, Gasol and Aldridge can all create their own shot and make plays for others. While the 5-man lineup data is bad, 70 minutes is a small sample size. Last night, these five all had plus minutes, whereas Dedmon was even and Parker and Green were minus seven and four.

Here’s an ATO with that highlights the pressure these five can put on a defense:

Leonard takes the ball out, which in itself is a decoy, as a lot of ATO’s are designed to pass the ball back to the in-bounder. The second decoy is Ginobili, who cuts towards the ball with Aldridge and Gasol set up for double screens. After Ginobili rubs off Aldridge, he splits the gap, similar to an elevator play, and cuts towards the basket rather than use Gasol’s screen. This action catches Brandon Rush, Ginobili’s defender, by surprise and puts him in chase mode. Moreover, it forces Karl-Anthony Towns and Gorgui Dieng to take a step backwards in case Rush can’t catch Ginobili.

While that action is happening, Mills cuts from the low block and curls around an Aldridge screen to get the ball. Start the play from the beginning and just watch Mills. His defender, Ricky Rubio, is immediately two steps behind Patty when he cuts, which could be a result of Rubio getting caught looking at the Ginobili action. Add in the Aldridge screen, and Mills gets the entry pass will all kinds of space.

As soon as Rubio recovers to Mills, the Spurs go right into a pick and roll in the opposite direction. Rubio has just expended energy running towards the sideline and now has to pivot to go over the screen in the opposite direction. All set up by the initial diversion, Rubio’s late recovery forces Towns to show onto Mills all the way to the strong side elbow as Gasol releases to the weak side elbow. As Rubio and Towns converge on Mills, Patty gives Gasol a crafty bounce pass between the two defenders.

Gasol is so open at this point, Minnesota freezes. If Gasol had rolled, it would be on Wiggins to bump him until Towns could recover. But Gasol doesn’t roll, and so Towns is on the hook to recover to Gasol once Rubio gets over the screen. He doesn’t, setting up an easy midrange shot for Gasol.

But the Spurs get an even better look. With Towns giving up on the play and Rubio on Mills, Wiggins, Dieng and Rush are left as possible help. Rush is out of the play as Ginobili has dragged him to the far corner. Wiggins inches towards Gasol, but can’t leave Leonard open. Dieng is occupied by Aldridge at the rim, but with no one else responding to Pau, he decides to run out at Gasol anyway. It’s a bad gamble, and Gasol lofts an easy pass to Aldridge who finishes the play. Maybe Dieng was hoping Rush could have rotated down to Aldridge faster, but Rush has no chance against LaMarcus.

This play is all set up by getting Rubio to chase Mills, which overextends Towns in the pick and roll to free up Gasol. If Dedmon is in over Gasol, Towns would have been able to get back to the non-shooting Dedmon, or the Wolves would have been able to bump the roller and force a skip pass, giving them more time to recover. If Green is playing instead of Ginobili, the initial cut to the rim wouldn’t happen as quickly. Finally, with Parker in, Rubio might have been able to go under the screen after getting turned around.

This is just one play compared to 70 minutes of analytics that scream not to play these five together. But although this group would struggle to defend elite teams for long stretches, if a basket is needed late, this is a lineup we could see.

Out of a dead ball situation, on one given play: Mills, Ginobili, Leonard, Gasol and Aldridge might be the most difficult Spurs lineup to guard.